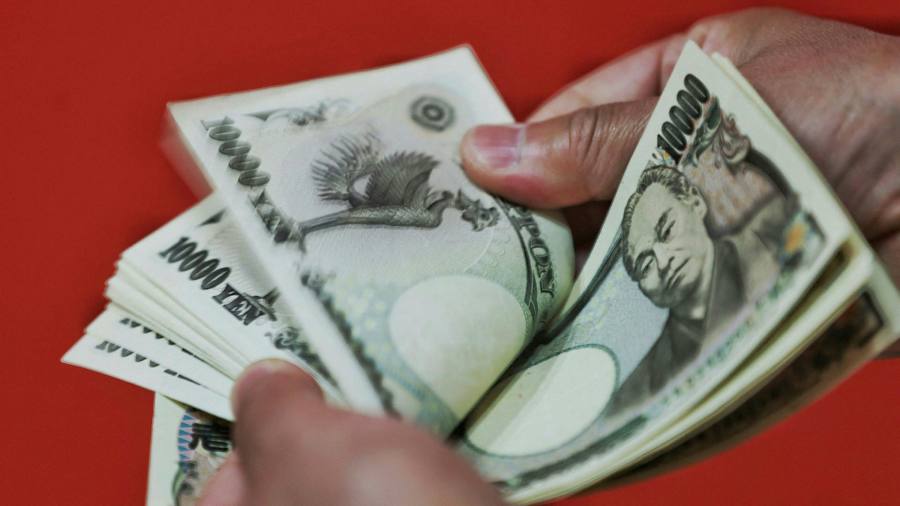 The Japanese yen fell to a new 20-year low against the dollar on Wednesday, pushed down by expectations that the Bank of Japan will defy global trends and keep monetary policy loose.

The yen dropped as much as 1.4 per cent against the US currency, taking it past ¥134 per dollar. It has declined roughly 4 per cent this month and has in recent days neared its weakest level since early 2002.

The move came after the governor of the BoJ said that consumers had become “more tolerant” of price rises, comments that he later retracted. Speaking at the FT’s Global Boardroom event, Haruhiko Kuroda said that a weakening yen would boost the profits of Japanese companies.

In stark contrast to other major central banks, the BoJ has decided against tightening monetary policy in recent months.

“The dollar has seen a meteoric rise versus the Japanese yen over the past three months as the Bank of Japan maintains a dovish policy stance relative to the Federal Reserve,” strategists at Bespoke Investment Group said on Wednesday.

Investors expect policymakers in the US and eurozone to take a markedly different stance as they attempt to tame inflation, a view that has weighed on government bond prices this year.

That weakness extended on Wednesday, with the yield on the 10-year US Treasury note rising 0.07 percentage points to 3.04 per cent as the price of the debt fell. Money managers are betting the Federal Reserve will lift its policy rate above 3 per cent next year, a shift that has already rippled through financial markets.

Now, they are watching for the May US inflation report due on Friday as they assess the state of the economy and impact of rapid price rises on consumers. The figures are expected to show US consumer prices rose 8.3 per cent last month, matching the pace of increases from April.

In the past two days, both the World Bank and the Paris-based OECD have cut their global growth forecasts because of the Ukraine war and higher energy prices.

As growth slows, surging inflation is pushing major central banks to lift borrowing costs and withdraw huge monetary stimulus schemes introduced in the early stages of the coronavirus crisis in 2020.

“We’ve had this huge monetary intervention and we’re just starting to see it unwind,” said Roger Lee, head of equities at Investec. “The idea that the market has priced this correctly seems very optimistic.”

The European Central Bank is expected on Thursday to signal a significant shift away from its long-held policy of keeping interest rates below zero, with markets anticipating that the bank’s main deposit rate will move back into positive territory by September. The ECB introduced negative rates in 2014 to stimulate lending and spending and has not raised borrowing costs since 2011.

The yield on Germany’s 10-year Bund, a benchmark for eurozone debt costs, added 0.06 percentage points to 1.35 per cent, the highest since 2014.

Italy’s equivalent bond yield rose 0.09 percentage points to 3.37 per cent, having almost tripled since the start of the year as traders anticipated that weaker eurozone nations would struggle with economic downturns and higher debt costs.

In equity markets, Wall Street’s S&P 500 share index fell 1.1 per cent in New York, reversing a two-day rally at the start of the week as nearly 90 per cent of the stocks in the benchmark slid. The technology-heavy Nasdaq Composite declined 0.7 per cent.

Europe’s regional Stoxx 600 share index fell 0.6 per cent, with banks and industrials among the worst performing sectors as investors weighed up the implications of higher rates for economic growth and the eurozone’s weakest borrowers.