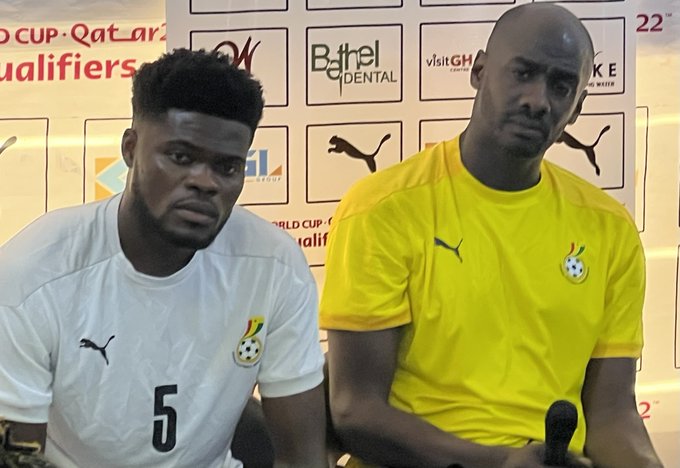 Black Stars of Ghana interim head coach Otto Addo has praised his team after they picked the ticket to the 2022 FIFA World Cup in Qatar.

Ghana stunned Nigeria with Thomas Partey scoring for the Black Stars in the 10th minute before William Troost-Ekong leveled for Nigeria at the MKO Abiola Stadium.

The Black stars held on to the 1-1 scoreline booking their spot on away goal rule.

Addo who was appointed as interim coach following Ghana poor performance at the Africa Cup of Nations expressed his delight.

He said, “I’m really delighted, exhausted, it was a tough match and we fought our way through.

“We had big big problems especially in the first half, and through some changes, the players gave their tactics very well and still they [the Nigerians] had some good chances.”

Despite praising his players for the victory, the Ghana coach reserved some praise for the Nigerians and expressed his sympathy for the Super Eagles who fought over both legs.

“Our goalkeeper was there when we needed him and we had a little bit of luck also, because if you see the chances the Nigerians were better.

“I feel a bit pity for them but this is football, sometimes and we fought our way through”, the Black Stars coach said..

Addo did not forget the contribution of his predecessors for the work they did, claiming it culminated in their World Cup qualification.

The former winger took over from Milovan Rajevac who was sacked after the country’s unimpressive showing at the recent AFCON in Cameroon last month.

Rajevac was named to replace Charles ‘CK’ Akonnor before the AFCON and Addo says their contribution to the Black Stars should not be overlooked.

“This was only two games. There was a lot of work which was done before. For Milo Rajevac, for CK Akunnor, we are all in this together,” Addo said.

Ghana qualified for their fourth World Cup after edging out Nigeria on the away goal rule following a 1-1 draw in Abuja.

The two sides drew 0-0 in the first leg in Kumasi last week and heading into the return fixture, the Ghanaians only needed a scoring draw to progress.

And they did exactly that, qualifying for the World Cup after missing the 2018 showpiece in Russia.

For Nigeria, this is the first time they will be missing the World Cup since 2006.