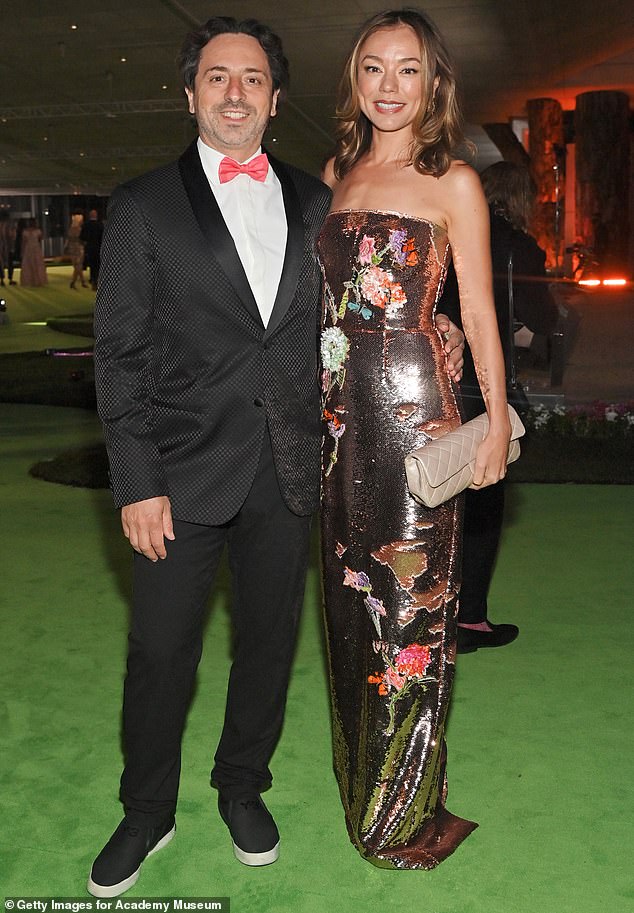 Elon Musk‘s fornicating has become almost as messy as his business dealings.

With nine children, two ex-wives and many other loves along the way, the 51-year-old has left quite the trail of heartbreak.

The Wall Street Journal reported on Sunday that Musk and Shanahan had a ‘brief’ affair in December last year, before her husband Sergey Brin filed for divorce.

It brought a bitter end to Musk’s friendship with the Google co-founder, who is now said to be selling off all of his interests in Musk’s various companies.

Last picture together: Sergey Brin and his wife Nicole Shanahan in September last year, only two months before they separated

Brin and Musk had been friends for years. In 2008, he gave Musk $500,000 in funding for Tesla when no one else would at the peak of the financial crisis.

Brin cited ‘irreconcilable differences’ when he filed for divorce in January.

She told Puck at the time: ”I hope for Sergey and I to move forward with dignity, honesty and harmony for the sake of our child.

‘And we are both working towards that.’

Musk met his first wife Justine Wilson when the pair were studying together in Ontario.

They tied the knot in 2000, moved to Los Angeles and welcomed their first son – Nevada – who died when he was only 10 weeks old from SIDS.

They went on to have twins and then triplets together; Griffin, Xavier, Damian, Saxon and Kai.

She told in a Marie Claire article how she considered herself to be his ‘starter wife’.

The pair divorced in 2008 after eight years of marriage and five kids.

They were dating when he made his first millions through Zip2.com, an internet company that made him $20million in the late 1990s.

It was while they were dating and engaged that he founded X.com – which later became PayPal.

When they divorced in 2008, they had a post-nuptial agreement in place. It’s unclear what she received in the way of a settlement.

She wrote in her Marie Claire essay that Elon had made her ‘disposable’.

Musk married British actress Talulah Riley within weeks of meeting her after his divorce from Justine.

Musk with Talulah Riley, his second wife (who he married twice) and his twin sons Griffin, left, and Xavier, right, in 2010

They have always spoken highly of one another publicly and say they are on great terms.

Musk went public with Amber Heard the following year, after her acrimonious divorce from Johnny Depp.

While their relationship was brief (they parted ways after just a year), they seemed to remain friends.

Musk honored Amber’s promised payments to the ACLU that she said she was going to pay using her divorce settlement from Depp.

She had pledged to give the full $7million to the charities but revealed under questioning that she hadn’t been able to, and that Musk made some payments in her name.

Heard’s embarrassing court battle with Depp played out for months at a trial in Virginia earlier this year.

Musk stayed out of it and was not called to the stand to testify, unlike Johnny’s ex Kate Moss.

He tweeted at the end of the trial that he hoped they would both ‘move on’.

‘At their best, they are both amazing,’ he said.

After Heard, Musk moved on with the singer Grimes, making their debut as a couple at the 2018 Met Gala.

By September 2021, the pair had broken up. Musk told Page Six they were still on ‘great terms’, however.

Musk with his ex-girlfriend Grimes, left. They have two kids together – a son, X Æ A-Xii (right with Musk) and a daughter, Y, who they welcomed in December

In December 2021, Grimes stunned the world by announcing the pair had welcomed another baby – a daughter who they had via a surrogate.

The baby girl’s name is Exa Dark Sideræl but they refer to her as ‘Y’.  Now, they say they are ‘fluid’  in their relationship.

Musk was pictured with Australian actress Natasha Bassett for the first time in May this year.

The pair were spotted having a romantic lunch in the South of France while both in town for movie premieres and weddings.

Elon Musk with his 27-year-old girlfriend, Natasha Bassett, in the South of France in May,

He did not take her as his guest to the wedding of Hollywood agent Ari Emanuel and designer Sarah Staudinger, but the pair were seen laughing, eating and drinking during their date that was over the same weekend.

Bassett, 27, had reportedly taken Musk’s mother, Maye, as her date to a film premiere at the Cannes Film Festival.

Bassett moved to the US from Australia when she was 19. She first worked in New York then traveled to L.A. It’s unclear how she and Musk met.

Zilis, who was born in Ontario, Canada, met Musk through OpenAI, the artificial-intelligence research-and-deployment nonprofit Musk cofounded in 2015

Zilis, who was born in Ontario, Canada, met Musk through OpenAI, the artificial-intelligence research-and-deployment nonprofit Musk cofounded in 2015.

She studied economics and philosophy at Yale where she also played goalie on the women’s ice-hockey team.

Just last year, Zilis posted a nod to Prince Harry’s Silicon Valley startup with a throwback picture of the two of them from 2013 when she was asked to brief him on tech startups.

Zilis is currently the director of operations and special projects for Neuralink, Musk’s brain-machine interface company.

Laughing it off: Musk shrugged off headlines about his many children earlier this month by joking that he was helping the ‘underpopulation crisis’

The company has boasted its success in implanting company chips into monkey brains, claiming the primates were now capable of playing pong, CNN reported.

Since then, the company has had to address concerns about its testing practice as it denied allegations of animal cruelty despite confirming earlier this year that monkey’s have died as part of its testing.

And now for the mini Musks!

Musk has nine children today who range in age from 18 to just a few months old.

Tragically, his first child, Nevada, died in 2002 before his first birthday. It was a case of SIDS, the unexplained but fearfully common syndrome which causes infants to die in their sleep.

Nevada was Elon’s first child with his first wife Justine.

Musk’s 18-year-old twins, Griffin and Vivian, are understood to live with their mother Justine in California.

Earlier this year, Vivian filed legal paperwork asking for her name to be changed and to be legally considered female.

Shown above is Xavier, who has since changed her name and gender to become Vivian. This pictured was taken at Currumbin Wildlife Sanctuary in Queensland, Australia, in 2017 when she would have been 12 years old

In the filing, she emphatically asked to be disassociated from her father and his last name.

After the filing became public, Justine tweeted that she was ‘proud’ of her ‘child’.

Kai, Damian and Saxon were born to Musk and his first wife Justine in 2006. The triplets are now 16 and already showing promise of following in their father’s scientific footsteps.

Damian is an alumni of the Wolfram Summer Camp, an intensive summer program in California.

Musk and Grimes are pictured with officials and, far right, several of his teenage sons. Musk is a father of six – 17-year-old twin sons, Griffin and Xavier and 15-year-old triplets, Kai, Saxon, and Damian, with his ex-wife Justine Wilson, and one-year-old son X Æ A-12, with Grimes

In a description of his efforts at the camp last year, the school said: ‘Damian Musk is an aspiring physicist currently doing computational and theoretical research work at Caltech and Fermilab Theory in quantum gravity and quantum information.

Musk’s two kids with Grimes are both under three and have equally baffling names.

Their son, X, was born in 2020 and has since made delightful appearances at some of his father’s business events.

She noted that her son ‘out there’ because Elon has been ‘bringing him to everything,’ however she doesn’t want her daughter to have the same attention. Elon and X are pictured in December 2021

Grimes carried him to term.

Their daughter, Exa Dark Siderael, was born in December via a surrogate.

Her birth was announced in March this year. The couple call her ‘Y’ for short.

Musk welcomed twins with Shivon Zilis in November last year. Their names are not known, and their existence wasn’t either until earlier this year when court filings in August gave them away.

Zilis had asked in her filings that the children be given their father’s last name, and her last name as a middle name.

Their births were reported by Insider, which did not name the babies to protect their privacy.