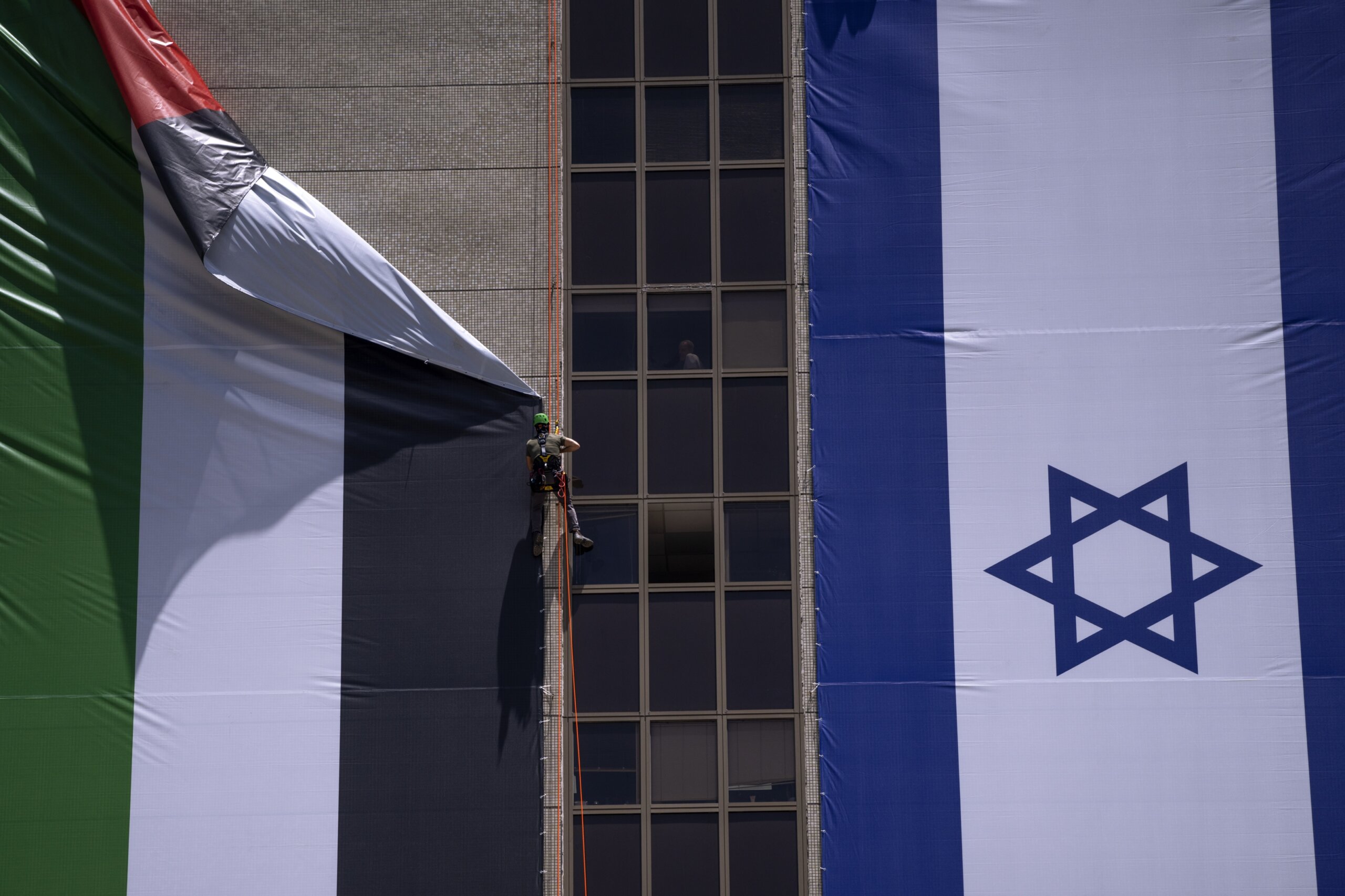 JERUSALEM (AP) — It’s not a bomb or a gun or a rocket. The latest threat identified by Israel is…

JERUSALEM (AP) — It’s not a bomb or a gun or a rocket. The latest threat identified by Israel is the Palestinian flag.

Recent weeks have seen a furor by nationalists over the waving of the red, white, green and black flag by Palestinians in Israel and in Israeli-annexed east Jerusalem.

Yet the fracas over the flag tells a broader story about how much hopes for peace with the Palestinians have diminished and about the stature of the fifth of Israelis who are Palestinian. They for long have been viewed as a fifth column because of their solidarity with the Palestinian cause.

Palestinian citizens of Israel see the campaign against the flag as another affront to their national identity and their rights as a minority in the majority Jewish state.

In recent weeks, Israeli authorities have gone out of their way to challenge the hoisting of the Palestinian flag. Police at a funeral in east Jerusalem last month for the well-known Palestinian-American Al Jazeera journalist Shireen Abu Akleh snatched Palestinian flags from mourners, reportedly following an order from a district police chief to make sure the Palestinian colors don’t fly at the politically-charged event.

Two Israeli universities were slammed by nationalists for allowing Palestinian flags to be waved at campus events. Israel Katz, a senior opposition lawmaker, urged flag-waving Palestinian-Israeli students to remember the war leading to Israel’s establishment in 1948, saying Jews “know how to protect themselves and the concept of the Jewish state.”

Those events culminated in a push by opposition legislators to ban the waving of the Palestinian flag at institutions that receive state funding, which would include universities and hospitals, among others. The bill passed overwhelmingly in its first reading on Wednesday, 63-16, although several parties in the governing coalition were absent and the coalition may seek to block the bill from moving forward.

“In the state of Israel there is room for one flag: the Israeli flag, this flag,” Eli Cohen, the legislator who sponsored the bill, said from the dais of Israel’s parliament, the Knesset, as he pointed to an Israeli flag hung behind him. “This is the only flag there will be here,” he said to applause from some legislators.

According to Adalah, a legal rights group for Palestinian Israelis, waving the flag is not a crime under Israeli law. A police ordinance grants officers the right to confiscate a flag if “it results in disruption of public order or breach of peace.”

Israel’s Palestinian citizens make up 20% of the population and they’ve had a turbulent relationship with the state since its creation in 1948, when hundreds of thousands of Palestinians fled or were forced to flee in the events surrounding the establishment of the state.

Those who remained became citizens, but have long been viewed with suspicion by some Israelis because of their ties to Palestinians in the West Bank, Gaza Strip and east Jerusalem, territories Israel captured in the 1967 Mideast war. That sense deepened last year when mob violence erupted in mixed Jewish-Arab cities, with looting and attacks scarring residents on both sides.

Palestinian citizens have carved a life for themselves in Israeli society, reaching the highest echelons in various spheres, including health, education and public service. An Arab Islamist party for the first time in history is now a member of a governing coalition. But Palestinians in Israel are generally poorer and less educated than Jewish Israelis and they have long suffered discrimination in housing, government funding and public works.

While there have been efforts in recent governments to address that socio-economic gap, the nationalist rights of Palestinians have been slowly eroded over the years, especially as Israeli nationalist sentiment has grown.

“It is our right to raise our Palestinian flag,” said Alin Nasra, an activist and student at Tel Aviv University. “This is something that distinguishes us as a minority inside Israel.”

Yitzhak Reiter, president of the Middle East and Islamic Studies Association of Israel, said the uproar against the flag is part of a feeling by nationalists and some mainstream Israelis that they are “losing the state,” to Palestinian nationalism from within Israel’s borders.

He cited previous laws that bar municipalities or institutions from marking Israel’s Independence Day as a day of mourning or the Jewish state law that tried to strengthen Israel’s character as a Jewish state but which Palestinian citizens saw as a further downgrade of their status and a blow to their national identity. Israel’s national symbols — a biblical candelabra, the star of David on its flag — do not include Palestinian or Arab emblems and Israel’s anthem speaks of the yearning of the Jewish soul.

The flag, Reiter said, “symbolizes the enemy, but waving the flag, for those who oppose it, is harmful to Israeli sovereignty.”

The left-leaning daily Haaretz chided the bill against the flag, saying Israel had an “obsession” with it because it reminds the country of “the sin of the occupation” of lands the Palestinians want for a future state.

With peace talks a distant memory and the occupation dragging on, the battle over the flag shows how far from reality Palestinian statehood is, with the nationalist narrative in Israel increasingly going mainstream.

Ronni Shaked, of Jerusalem’s Harry S. Truman Research Institute for the Advancement of Peace, said he remembers a time when politicians wore lapel pins that bore both the Israeli and Palestinian flags and that even hawkish former Prime Minister Benjamin Netanyahu, the current head of the opposition and Israel’s longest serving leader, had a Palestinian flag hanging behind him during events with the Palestinian leadership when relations between the sides were less frosty.