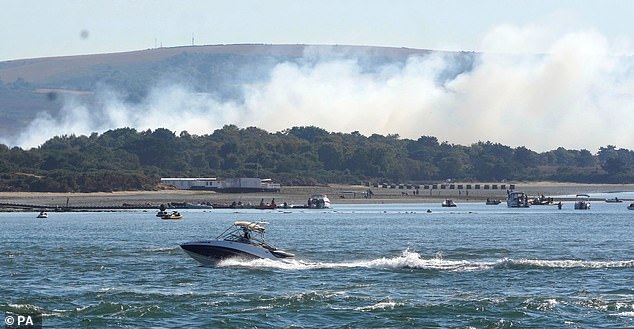 By Alastair Lockhart For Mailonline

Hundreds of thoughtless drivers have frustrated attempts to tackle a massive wildfire in Dorset after they ignored signs not to park in the area and moved a fire brigade’s hose so they could park their cars.

A huge fire ripped through a nature reserve near a nudist beach in Dorset – ‘likely’ sparked by a disposable barbecue.

Around 90 firefighters were scrambled to get the blaze under control, and dozens were evacuated from the area.

While the devastating fire was raging near Bournemouth, firefighters discovered an unexploded Second World War bomb, making the situation even more dangerous.

Firefighters tackled the flames throughout the night and were still dampening down the fire today.

However, this didn’t stop around 300 drivers from travelling near to the danger zone and parking their cars on a hose being used to tackle the fire.

Dorset Police sent out a warning on Twitter, demanding the drivers return to their cars and move so the fire brigade could get the fire under control.

The blaze seen from Sandbanks yesterday. People could see the smoke as far as 15 miles away

The force said: ‘We have been called to reports that more than 300 cars have ignored the council’s no parking signs in Ferry Road, Studland.

‘The restrictions are in place because the water hose is running along the road to allow firefighters to deal with the large heath fire there.

‘We’ve even received reports that motorists have been moving the hose so they can park. Please return and move your vehicles.

‘Do not park here: the fire service is working hard to tackle this blaze. They need the public to help them, not hinder them.’

Firefighters said they had discovered a used disposable barbecue in a small camp, which they believe could be the cause of the fire.

A spokeswoman said: ‘We found evidence of a little camp where someone had used a disposable barbecue, we can’t say 100% that was the cause but when we find evidence we have to assume that’s the most likely cause – fires don’t just start on their own.’

The large fire tore through Studland near to the millionaire’s resort Sandbanks and Godlingston Heath National Nature Reserve which is next to a popular nudist spot, between Bournemouth and Swanage

Prime Minister Boris Johnson said last month using barbecues in the countryside while Britain endures drought and its hottest ever weather was ‘insane’.

A spokesperson for the fire service said Dorset had seen a 492 per cent increase in open fires in the first 10 days of August than in the same period last year.

The wildfire started near Little Sea on Dorset’s Studland peninsula around 1pm yesterday and quickly spread to a busy nearby beach.

Ferry services in the area were suspended yesterday but resumed this morning as the fire service scaled back its operation.

The area is surrounded by holiday resorts, including a nudist beach and a ‘millionaires playground’ at Sandbanks.

A drought has been declared in much of England and Wales, while the Met Office has issued an Amber warning for both nations. Temperatures are expected to reach 34C today and tomorrow.

Temperatures are also expected to hit around the mid-twenties in parts of Scotland and Northern Ireland, and about 30C in the north of England.

The unusually dry and hot weather has made countryside fires far more likely than normal and the UK has seen a huge number of wildfires raging over the last month.