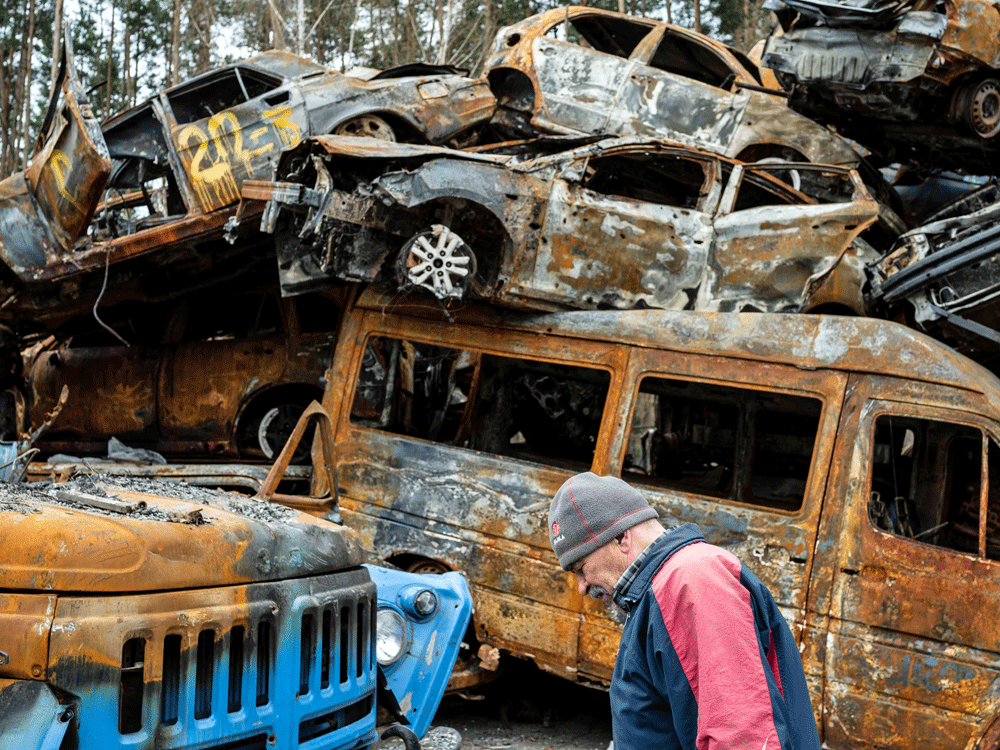 The war in Ukraine is taking its toll on Mary McNutt, but the resident of Fort McMurray, Alta., has never actually been to the beleaguered Eastern European country.

Merely following the news about Russia’s invasion caused such dismay and frustration, she says it drove her to seek emergency psychiatric help recently.

“I was an emotional mess,” said McNutt Tuesday. “I was going from being happy-go-lucky and functioning and socializing to being in my room, bawling and crying.”

But she’s not alone.

Many Canadians far removed from the shelling and bombing are suffering anxiety, depression and even episodes of post-traumatic stress disorder because of the war and its catalogue of atrocities, therapists say.

The rapid-fire developments, the fear of escalation that could hit closer to home and the war happening at the end of an already stressful pandemic may be fuelling the reaction, they say.

People with a history of trauma or some other psychological issue are being affected most severely, but even those without such backgrounds are seeking professional help for symptoms like anger, sleeplessness and stress, says a Toronto-based psychiatrist.

“It’s really very, very much impacting the psychological well-being of many, many Canadians,” says Dr. Vincent Agyapong, a University of Alberta psychiatry professor. “They are all watching the images of the war that’s going on in Ukraine, people dying and cars being burnt and bombs and blasts.”

If Canadians often absorb that upsetting war news via their mobile phones, Agyapong is harnessing the same technology to try to respond to the psychological symptoms.

He and colleagues developed a new smartphone service – Resilience&Hope4Ukraine — that sends subscribers regular text messages. They’re informed by cognitive-therapy principles and designed to counteract the strain of observing the conflict.

A similar program Agyapong helped create for COVID-related anguish was found to lessen suicidal thoughts and other mental-health problems.

There are no empirical studies yet documenting the extent of psychological stress experienced by Canadians because of the war. And their experiences would typically pale, of course, in comparison to the suffering of people who are actually caught in the midst of the conflict.

But at Toronto’s Centre for Addiction and Mental Health, psychiatrist and scientist Dr. Yuliya Knyahnytska says she has been seeing a lot of people affected adversely by observing the war from Canada.

It is particularly triggering for people who have suffered a trauma in the past, such as experiencing war in another country or as part of the Canadian military, not uncommon given Canada’s large immigrant population, she and Agyapong said.

But the news is also affecting Canadians with no such background and no direct connection to Ukraine itself, she said.

And likewise, it’s not just people with a history of psychological problems, said Knyahnytska.

“We also see a lot of people who have never experienced mental health issues or were blissfully unaware of those issues or had the skills to cope with them.”

She said patients seem to suffer partly because they fail to understand why the attack on Ukraine and its citizens is happening, and because they worry about it expanding into a broader conflict. What’s more, it’s all happening amidst an ongoing pandemic, noted the University of Toronto professor.

“People have already been subjected for two and half years to incredible levels of harm and pain and loss,” she said. “And now the Ukraine war, it’s just an extra level of horror.”

Agyapong, who is also on the Dalhousie University faculty, said the texts sent out to the new service’s subscribers are designed to steer their thoughts in a more positive direction – “rather than ‘Oh my God, this is a catastrophe, this is going to become a Third World War.’” They offer links as well to help lines and other mental-health resources. Some suggest limiting the amount of news the reader consumes on the Ukraine war.

“Depressing thoughts will return to test you,” says one of the texts. “You may think this war will never end, or that Ukraine will burn. Remember to never give up on thinking positive and being hopeful in the face of temptation to think negatively. You are in charge of setting the stage for a positive mental health, war, or no war.”

As simple as the idea seems, there is evidence from the original, pandemic-related RelienceHope service that it does work.

In one study led by Agyapong, subscribers who had been using the program for six weeks were significantly less likely to suffer from anxiety disorder, stress, major depression and thoughts of suicide than those who had just started using it.

Knyahnytska said the app seems like a useful tool, especially when the mental-health system is generally overwhelmed by demand for services. Meanwhile, she is coping herself with the emotional impact of the war in a very personal way. A native of Ukraine who immigrated here at age 30, she rushed over to Poland when the war started and convinced her parents, both doctors, too, to leave Ukraine and come with her to Canada.

The masses of refugees she saw in Poland – mostly the elderly and women and children who had to leave their men behind to fight – made an indelible impact, she said.

McNutt, a bartender and server by trade with a sociology degree, said she had always followed politics and news events closely and once actually admired Russian President Vladimir Putin.

But she became increasingly “sickened” by Putin’s unprovoked invasion of Ukraine, to the point that last month she abandoned a substance-abuse program in dismay. And with a history of bi-polar disorder, McNutt ended up having to seek emergency help, where she met Agyapong.

She said it’s not just the bloodshed and civilian toll that has affected her, but a frustration at what she considers insufficient help offered the Ukrainian government by the likes of Canada and the United States.

She thinks this war was a particular trigger in part because it is occurring in a relatively developed country that’s easy to relate to as a Canadian.

But the new text-message service is helping, said McNutt.

“It’s making me feel that I’m not in this entirely alone, there’s other people struggling and there is still hope and beauty to be found in the world.”