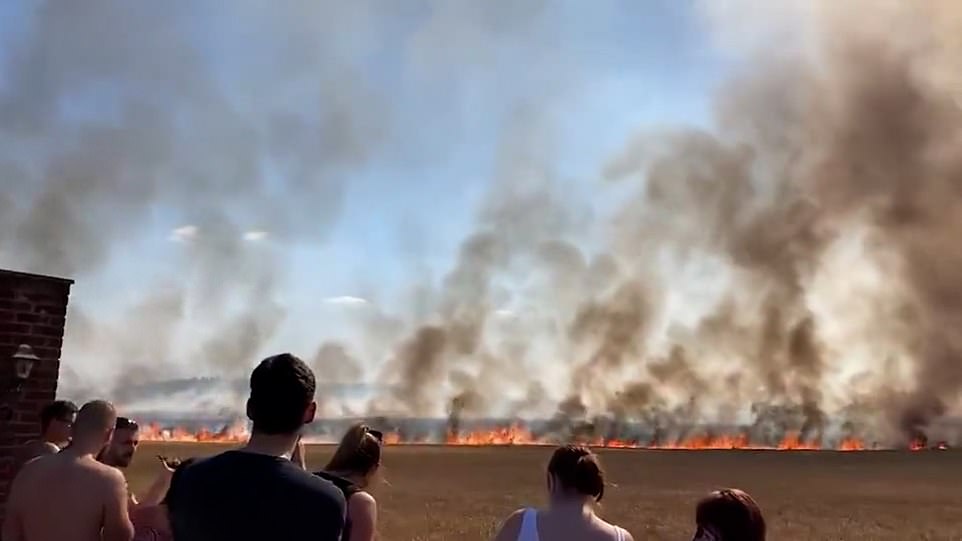 A huge fire has erupted near a Derbyshire model village sparking the evacuation of 50 homes as tinder-dry conditions and unprecedented heat sparks further chaos in the UK.

Derbyshire Fire and Rescue Service said 12 fires crews were dealing with a blaze off Fox Lane in Creswell, with three fields and a neighbouring farm complex affected.

They added that 50 properties were evacuated and Creswell Events Centre was being used as a rest centre for evacuated residents.

Footage shared online showed fire filling the horizon at the Creswell blaze, with large plumes of smoke in the sky.

Several roads have been closed including Elmton Road at the junction of Skinner Street, Fox Street, Frithwood Lane, Elmton Road to Hallgate Street and Wood Lane.

Officers said residents should keep their doors and windows closed while the fire is dealt with.

Oli Mousley, 19, a law student who lives in the village, said there was also ‘ash floating around’ in the residential area nearby and a ‘strong smell of burning’.

It comes as police ordered people to avoid a precious Dorset nature reserve after a roaring blaze broke out this afternoon.

The large fire, being tackled by 90 firefighters, is tearing through Studland and Godlingston Heath National Nature Reserve which is next to a popular nudist spot on Knoll Beach and a major incident has reportedly been declared.

The four-minute chain ferry from Studland to the millionaire’s resort Sandbanks has been suspended while the fire is put out. Cars were forced to evacuate the ferry – which usually carries tourists – to allow fire engines to tackle the flames.

The company said on social media: ‘Ferry Road is closed due to a large fire in Studland. Emergency services are only letting people off the Studland Peninsula – the road is completely closed on the Studland side.’

The fire, which started just after 1pm, could be seen on the other side of Poole Harbour with witnesses suggesting the smoke was getting darker at around 3.40pm.

‘Crews were first called to Studland Heath at 1.12pm this afternoon (12 August), and there are currently approx. 90 firefighters tackling the blaze.’

Footage shared online showed fire filling the horizon at the Creswell blaze, with large plumes of smoke in the sky

The four-minute chain ferry from Studland to the millionaire’s resort Sandbanks has been suspended while the fire is put out. Pictured: A fire engine on a chain ferry heading to Studland Heath, Dorset

The large fire, being tackled by 90 firefighters, is tearing through Studland and Godlingston Heath National Nature Reserve which is next to a popular nudist spot on Knoll Beach. Pictured: Heavy smoke rising from the scene on Studland Heath, Dorset

A spokesperson added: ‘Multiple jets and beaters are being used to try and bring the fire under control. Studland and Godlingston Heath National Nature Reserve borders Studland Bay on the south side of Poole Harbour, and is found between Swanage and Sandbanks.’

The fire service also told people to keep doors and windows closed. A spokesperson added: ‘We were called to Studland Heath at 1.12pm for a large fire involving undergrowth and gorse.

‘We are asking people to leave the heath for their own safety, and to avoid Ferry Road.’

Due to the fire being either side of the main Ferry Road, access from and towards Swanage is currently closed.

Group manager of Dorset and Wiltshire Fire and Rescue Brad Stevens said: ‘The fire affects an area of around 200m x 200m, and is generating a lot of smoke. Anyone in the local area who is concerned should keep doors and windows closed. Our crews are fighting the fire on all sides, using multiple jets and beaters, and National Trust staff are using machinery to create a fire break.’

He added: ‘Anyone who is currently on the peninsula will be able to leave via the chain ferry, which is running one-way with passengers towards Poole only. This will be very busy as the evening goes on, so people are asked to be mindful of the potential delays and prepare accordingly.’

Anyone using the harbour is being asked to stay away from the chain ferry route, so they can continue to assist.

At least four fire engine crews were called to the scene at 1.12pm with a major incident reportedly declared

While the Sandbanks Ferry has been suspended to the public, it is being used to transport fire engines across to Studland

The wild smoke can be seen from the millionaire’s resort of Sandbanks, previously home to Harry Redknapp and his family

As the blaze rips through the Dorset nature reserve, the chain ferry at the millionaire’s resort of Sandbanks has been suspended

One witness, Becky Wood, said: ‘Within minutes we saw fire engines come up as well as an ambulance. The ferry was pretty much full and they had to get all the cars to reverse off the ferry in order to get the fire trucks and ambulance in to take them over.’

Witnesses were shocked at hour quickly the blaze had ripped through the Dorset nature reserve which is next to a nudist beach.

Ms Wood added: ‘They’ve closed off the Poole side and there is no traffic allowed over to Swanage, they’re just diverting traffic and clearing the area.

‘It seems to be getting worse. At first we could just see the smoke as it was behind Shell Bay, but within 15 minutes it had spread down and we could see the flames. We were all shocked at how quickly the fire spread.

‘It’s best everyone avoids the area because I think they’ll be working for a while.’

The large fire, is tearing through Studland near to the millionaire’s resort Sandbanks and Godlingston Heath National Nature Reserve which is next to a popular nudist spot, between Bournemouth and Swanage

People flocked to social media to share images of the fire, with one user (above) labelling the blaze as a ‘complete tragedy’.

The Sandbanks Ferry has been used to take stranded motorists away from the area to the millionaire’s resort. A partner of one of the staff at Sandbanks Ferry said crews are ‘shuttling the ferry non-stop to get people to safety’, Dorset Live reported.

Local buses have also had to suspend services as the fire rips through the nature reserve.

Morebus said on Twitter: ‘UPDATE – Breezer 50 – Due to a fire at Studland and the ferry being suspended the Breezer 50 will divert via road both way. We will NOT be serving any stops between ULWELL and the Ferry Terminal at this time’.

The risk is greatest on large areas of open land, such as heathlands, fields and even cliffsides – evidenced by today’s fire.

Swathes of England are officially in drought today amid scorching temperatures and hardly any rain since June. Fires have been seen in other parts of the UK, including a grass fire on Leyton flats in east London.

Where in the UK is there an official drought?

The Environment Agency has confirmed that eight of its 14 areas are officially experiencing drought.