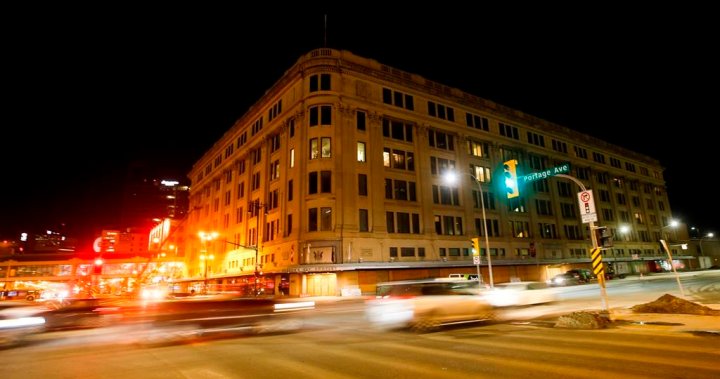 The retailer announced the gift of the nearly century-old sprawling limestone building to the Southern Chiefs’ Organization on Friday.

“We’re very proud the Hudson’s Bay Company can help be leaders in reconciliation,” Richard Baker, governor and executive chairman of the 352-year-old company, said in an interview.

“For many years, Hudson’s Bay Company and the Indigenous Peoples of Canada have co-operated together and this is a new moment of co-operation and partnership. We’re shaking hands with our old partners and building a relationship going forward.”

0:38
Vacant Bay store in downtown Winnipeg to be used in part for affordable housing: sources

Vacant Bay store in downtown Winnipeg to be used in part for affordable housing: sources

Grand Chief Jerry Daniels called the donation a “historic and monumental” step toward reconciliation in Canada.

“The vision really is to create as much opportunity as we can,” he said. “We’re really focused on economic reconciliation.”

The powerful symbolism of having a colonial store in the hands of Indigenous Peoples will stand as a “beacon of hope,” Daniels said.

“It will be a place for Indigenous Peoples to come together and work in collaboration to put our children first.”

The project’s working title is Wehwehneh Bahgahkinahgohn, or “it is visible.”

The six-storey building in downtown Winnipeg will be transformed to include almost 300 affordable housing units, a child-care centre, a museum, an art gallery and restaurants.

0:51
Inuit art to be displayed on Hudson Bay building

There are also plans for a health centre that will embrace both western and traditional medical practices and a rooftop garden.

The heritage building’s historic facade will be preserved, while the interior renovation will prioritize low-carbon materials and reducing energy consumption and greenhouse gas emissions.

It will also become the future Governance House for the chiefs of the southern First Nations, which represent 34 Anishinaabe and Dakota Nations.

The extensive renovation is expected to create jobs during the construction phase and significant long-term employment once complete.

1:43
The Bay in downtown Winnipeg closing