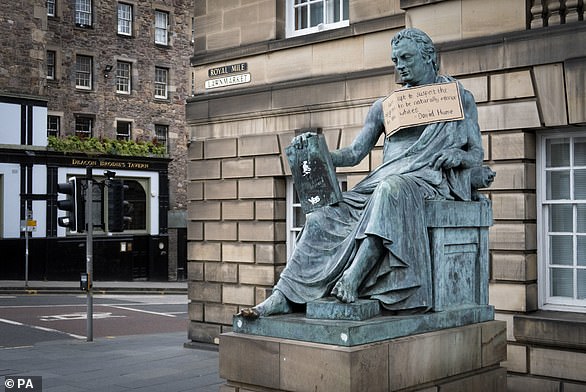 David Hume (1711-1776) is one of the most important UK philosophers, best known for his work on scepticism and empiricism and his contribution to the Enlightenment.

Hume saw philosophy as experimental science of human nature and tried to describe how the mind works in acquiring what is known as knowledge.

He had a profound and lasting impact on academics, his views said to have influenced the likes of economist Adam Smith, known as the Father of Capitalism, German philosopher Immanuel Kant and French sociologist Auguste Comte.

Hume also influenced the US following the American Revolution. James Madison defended the form of republican government proposed by the Constitution in the Federalist Papers, greatly influenced by Hume’s work and drawing on his History of England.

He is also said to have influenced the French Revolution, having been hailed as the eighteenth-century British writer whose works were most widely known and acclaimed on the Continent during the later Enlightenment period before the overthrow of Louis XVI.

Hume’s work is influential to this day, topping a 2010 survey of most admired philosophers and knocking Aristotle into second.

At the age of only 28 he released his groundbreaking philosophical work, A Treatise of Human Nature (1739-40), an attempt to introduce scientific reasoning into moral subjects.

In it, Hume argued against the existence of innate ideas, and concluded that no theory of reality is possible.

He wrote that there can be no knowledge of anything beyond experience, with his views, particularly on religion, highly controversial at the time, including his rejection of miracles and the argument for God’s existence.

Hume argued that there was no soul and wrote in the Treatise: ‘When I enter most intimately into what I call myself. I always stumble on some particular perception or other, of heat or cold, light or shade, love or hatred, pain or pleasure. I never can catch myself at any time without a perception, and never can observe any thing but the perception.’

The Roman Catholic Church, in 1761, put all his writings on the Index Librorum Prohibitorum, its list of forbidden books.

Hume was one of the leading voices of the Age of Enlightment, which dominated scholarly and academic discourse in the 18th century.

The Age of Enlightenment was a philosophical movement that spread through Europe.

It advocated ideals such as liberty, progress, tolerance, fraternity, constitutional government, and also emphasised the separation of church and state.

Science was a key driver of change, with the movement split into two distinct camps.

Firstly was the radical Enlightenment, which pushed for democracy, individual liberty, freedom of expression, and the eradication of religious authority.

A second, more moderate variety, sought reform between the traditional systems of power and faith.

Hume is one of the most respected voices from the period.

He believed that passions rather than reason govern human behaviour, proclaiming that ‘reason is, and ought only to be the slave of the passions’.

He studied law initially, following in the footsteps of relatives on both sides of his family, though he found the subject distasteful.

Later, because of the intensity of his intellectual discovery, he had a nervous breakdown in 1729, from which it took him a few years to recover.

In 1734, after working in a merchant’s office in Bristol, he came to the turning point of his life and retired to France for three years, where he wrote his treatise.

The Treatise was seen as Hume’s attempt to formulate a full-fledged philosophical system.

He later attempted to run for the chair of moral philosophy at Edinburgh in 1744, though he faces accusations of heresy and atheism that saw him defeated.

In 1748, he rewrote parts of his treatise, including a chapter on miracles where he controversially stated that a miracle can never be proved by evidence.

Though Hume’s views on slavery were ambiguous, he infamously claimed there were human races and that non-whites were inferior to whites.

The passage, from Essays, Moral, Political and Literary, reads: ‘I am apt to suspect the Negroes to be naturally inferior to the Whites.

‘There never was a civilized nation of any other complexion than white, nor even any individual eminent either in action or speculation.

‘No ingenious manufacturer amongst them, no arts, no sciences.

‘On the other hand, the most rude and barbarous of the Whites, such as the ancient German, the present Tartars, still have something eminent about them, in their valor, form of government, or some other particular.

‘Such a uniform and constant difference could not happen in so many countries and ages, if nature had not made an original distinction betwixt these breeds of men.

‘Not to mention our colonies, there are Negro slaves dispersed all over Europe, of whom none ever discovered any symptoms of ingenuity; though low people, without education, will start up amongst us, and distinguish themselves in every profession.

‘In Jamaica, indeed, they talk of one Negro as a man of parts and learning; but it is likely he is admired for slender accomplishments, like a parrot who speaks a few words plainly.’