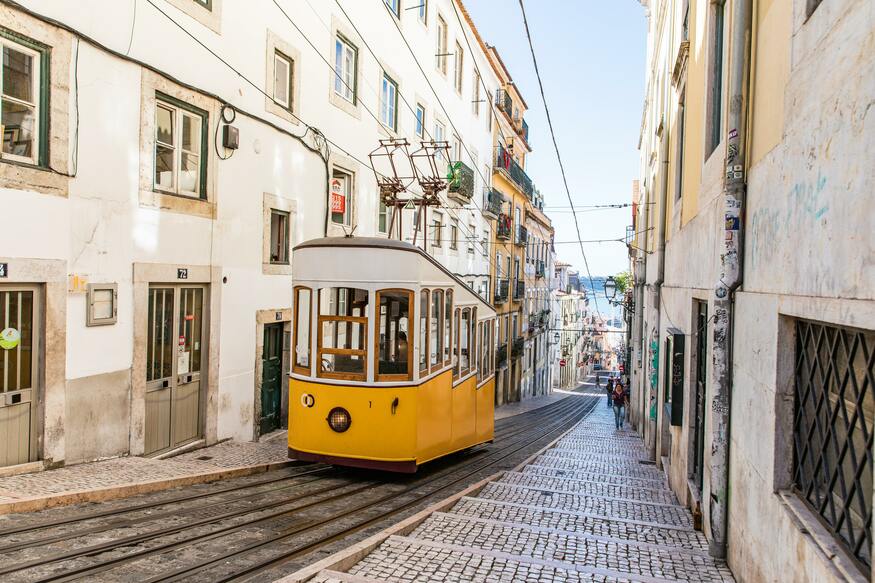 Flights go regularly from Heathrow (BA and TAP), Gatwick (easyJet), Luton (easyJet), and Stansted (Ryanair). If you’re making a longer trip of it, you can take the London to Lisbon train, through Barcelona or San Sebastien. It’s a two night journey with overnight stops, and several changes in France and Spain — at a relaxed pace, and with stops in alluring cities: very much a the-journey-is-the-destination vibe.

From the airport, it’s an easy Metro ride to the centre of the city. You can get taxis from the airport for about 15 euros, or order an Uber, but waiting time for both at the airport tends to be long.

Getting around Lisbon: The Lisbon Metro’s a gorgeous, high-design, heavily air conditioned beauty, speeding to all our favourite parts of the city. It’s €1.50 for unlimited travel within 60 minutes, and €6.50 for a 24 hour pass, with other combinations of passes that include unlimited travel on Transtejo (public ferry), and CP (local train network running outside of the city, on specific lines). You’ll need to buy a Viva Viagem card (the Oyster equivalent), and top up — easily done at Metro stations. Warning that the Metro stops running at 1am.

Beautifully art deco though the Metro is, you’re missing out on some of the beauty of Lisbon if you do most of your travelling below street level. At street level, it’s the iconic yellow streetcars, taxi, or electric bikes and scooters to hire (companies include Bolt and Lime).

And — best of all the options, if you’re able-bodied and reasonably fit — Lisbon’s a very walkable city, with a lot of our favourite parts clustered in half an hour’s stroll from the Avenida metro area. Packing high heels for Lisbon is completely pointless — not only are all of the great places to go out much too informal for that to be a Look, but the city’s a hilly labyrinth, cobblestone-lined streets rising and swooping back down steeply.

Accommodation: Airbnb’s always an option, with a lot of affordable places in the Alfama and Bairro Alto neighbourhoods. If you’re looking for something more Golden-Age-of-Art-Deco, it’s the high-luxe at Hotel Britania, designed in the 40s by modernist architect Cassiano Branco, just off the Avenida da Liberdade (two-minute walk to Avenida metro station, and fifteen minutes by foot to the clustered bars and restaurants of Bairro Alto, and not much further to the miradouros and breezy terraces of the riverside.) Bed and breakfast starts at €135 a night, and includes free entrance to a handful of Lisbon museums.

What to eat and drink: Pastel de nata, obviously. Arroz de marisco (rice and seafood stew). Delicately, crispily grilled sardines. Honourable mention to the francesinha, technically a speciality of Porto but very available in Lisbon — hard to beat for both its lunatic intensity and its stomach-lining properties. Ginjinha, a sour cherry liqueur (often at the end of a meal, for a digestivo).

And wine. On the export market, the country’s wine scene’s better represented by the Douro Valley, and the Alentejo regions — but Lisbon’s bars are awash with amazing local bottles, thanks to the stack of great wineries within an hour of the city.

Lisbon’s old town’s a warren of narrow streets winding up and down hills, and regularly crescendoing in beautiful viewpoints — miradouros, usually signposted — with panoramas over the river, and the city’s rooftops. They’re free to visit, and often with small gardens, porticos, or fountains to sit in. And lot of the miradouros are studded with cafes, bars, and restaurants; yes, they’ll be charging a premium for their location, but if you’re just making a coffee or sangria pitstop, arguably worth it.

The Terasse Alfama has pricey and just-okay food but truly amazing views — if you’re willing to stick to a Sagres and some olives, hard to get that wrong. It’s also a two minute walk from the Miradouro de Santa Luzia, with a shaded portico where you can cool off, small gardens to stroll through, and a terrace cafe overlooking it.

There are countless blog posts out there if you’re in need of a solid plan, listing the 12 Lisbon Miradouros You’d Be Completely Louco To Miss — and we’ve barely put a dent in the number the city has to offer ourselves — but tl;dr: head upwards to the highest point of the nearest hill, and chances are good there’ll be a beautiful public terrace waiting for you at the peak. That makes it nicely easy to wander the city relatively planless, cresting the hills when you start craving a cold beer with the city flung out at your feet.

In a city that isn’t short of buzzy, informal cervejarias, one of them still routinely heads up the list of recommendations we’re given by Lisbon locals and Lisbon-lovers — Cervejaria Ramiro (temporarily closed at time of writing, for a classically Portuguese long August holiday — reopening on 6 September, 2022). The queues of tourists you’ll often find outside are probably in part thanks to a visit from Anthony Bourdain for his No Reservations episode on the city, and a later one from Rick Stein’s BBC show Long Weekend, but Ramiro’s been beloved of locals for decades, since its opening in the 1950s. Specialising in seafood, you can go heavy on big pans of clams swimming in a pool of peppery green oil and garlic, garlicky grilled prawns (garlic is a motif), steak rolls, frosty glasses of beer or vinho verde, and still spend under €20 a head.

From there it’s a short — and picturesque — walk to MNAC (Museu Nacional de Arte Contemporañea), home to solo photography shows, Portuguese Romanticism, video installations, and a big permanent collection of Portuguese art from the mid-19th century to current. It’s also just a 20 minute walk from the Museu do Fado, which offers both an insight into the ‘universe of Lisbon’s urban song’, and a good excuse to take the tram 28 route wherever you’re heading next — the most famous of the Lisbon tram routes, thanks to its tourist-friendly path through the steep streets of the Alfama, one of the city’s oldest and most recognisable neighbourhoods.

Bairro Alto’s an ideal neighbourhood to head without a dinner plan. Go early and not that hungry, so you don’t risk just sticking with the first place you happen to pass, and spend a while roaming the network of narrow streets — crammed with restaurants, dive bars, wine bars, things-sort-of-approximating-clubs. If you’d rather head there with a plan, and you want that plan to involve rickety pavement tables and outstanding sardine pate and seafood stew, aim for Restaurante Alfaia.

And for a pre-dinner drink, and some local cured meat: The Old Pharmacy, on Rua do Diário de Notícias. A lengthy wine list, most of it Portuguese, and often Lisbon wineries, that starts and lingers at decent prices (€2.50 a glass), but with a number of bottles that’d let you go much more extravagant.

You can get to the Belém area, in the west of city on the Tagus river, by riverboat or Metro, where you’ll have a bunch of botanic gardens, a 16th century, UNESCO World Heritage listed monastery and fortress, and a few museums to explore — though we wouldn’t judge you if you ignore all the historic architecture, and head to the neighbourhood exclusively to get a breakfast pastel de nata from the (tbf, also historic) Pastéis de Bélem. The 1837 bakery’s an institution, selling custard tarts with the weight of nearly two centuries of tradition behind it.

From Belém you’re about an hour’s walk along the banks of the Tagus river back to the city centre, but better to take your time, stopping at some of the bars, cafes, and terraces edging the river. And also, shout out to the Conserveira de Lisboa: great pitstop for fans of sardines, or — maybe a bigger demographic — fans of tiny, 1930s, Wes Anderson-ish traditional sardine tin shops, walls lined with tinned fish in retro-design cans. Not a museum, but feels like one.

When you’re back nearer the Bairro Alto neighbourhood, if you’ve timed it right you can catch one of the free Lisbon Street Art Tours, for a walk through Lisbon’s vivid street art and graffiti scene — starts at Rossio Metro, winding through Lisbon’s open air street art galleries, the Mouraria neighbourhood, and taking in murals by artists like Akacorleone, Vhils, and more.

Heavy with saudade — longing — fado’s the traditional urban music of Lisbon, traced back to the early 1800s. A fundamental part of the city’s music culture, in 2011 it was added to UNESCO’s Intangible Cultural Heritage Lists.

Fado restaurants are a traditional part of the city’s restaurant scene. Banish ideas of something Vegas-y, and high-gloss performances. Fado was born among the urban working-class, and the port districts of 1800s Lisbon — its roots are in lowkey taverns and cafes, and places like Maria da Mouraria Casa de Fados, a small, unpretentious restaurant, with the fado singers and musicians performing from a tiny space between tables. Expect a set menu with a your-Portuguese-grandmother’s-kitchen vibe, with beer, table wine, ginjinha liqueur, and coffees included, and fado performances scattered through the night.

Done with the right level of exuberance, your dinner choice might well see you through to the early morning. But there’s also a liberal scattering of clubs and gig venues with 6am licences — if you want to go all night till the break of dawn, try LuxFrágil (on the riverfront, nearest to Santa Apolónia metro), Incógnito (indie-slanted, on R. Poiais de São Bento). Be warned that common complaints about both we’ve heard, though not experienced, are capricious pricing on the door as the night gets later, and an arbitrary, Berghain-y approach to which people-outfits-Vibes merit entrance.

You could spend a lifetime falling for Lisbon, and its surroundings. Popular day trips from Lisbon are heading to nearby Sintra or Cascais — both less than an hour from the city — small, historic towns on the coastline. If you have longer than a weekend to play with, Lisbon’s an ideal jumping off place for a road trip to the Alentejo’s rugged coast, beautiful, sparsely-populated beaches, and casually incredible wineries.

Londonist were hosted by Hotel Britania.