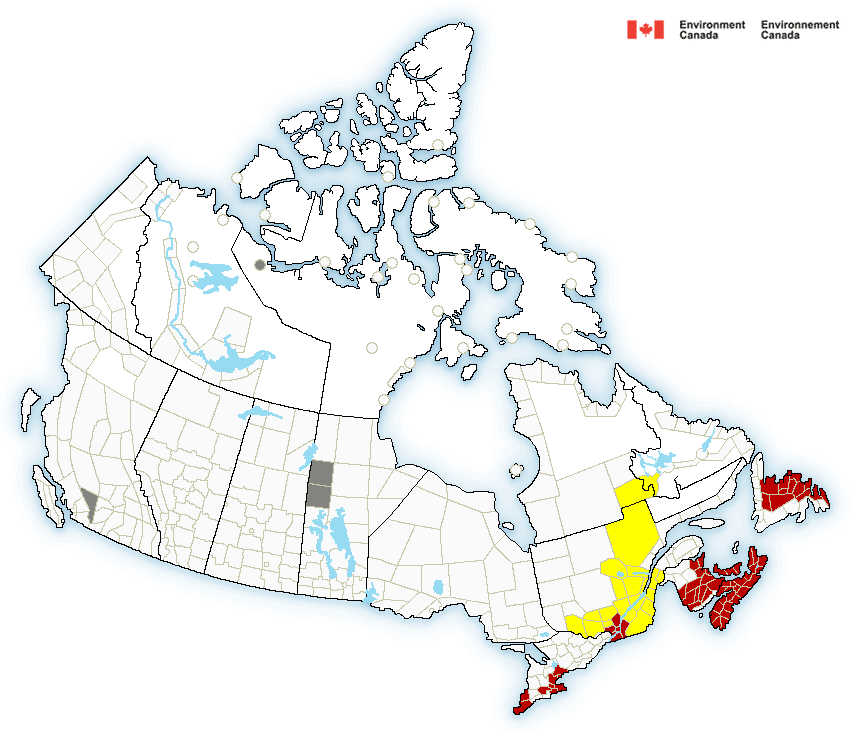 Summer is most definitely here across Canada.

As of Saturday morning, heat warnings have been issued by Environment and Climate Change Canada in six provinces.

The advisories are all in the eastern part of the country, with the entirety of Nova Scotia and Prince Edward Island under warnings.

In those provinces, ECCC warns of temperatures climbing into the 30s, with the humidex pushing into the 40s in some cases. The heat is expected to last likely into Monday in some areas.

Parts of New Brunswick are also under similar warnings, with all areas of the province, except for the northwestern regions and areas near the Fundy Coast, mentioned.

“A combination of very warm temperatures and elevated humidity will create very high humidex values today and Sunday. These conditions may persist into Monday over some areas,” ECCC’s warning reads in part.

Meanwhile, much of southern Ontario — including the City of Toronto — is being warned of higher daytime temperatures. ECCC says highs can reach the low 30s, with humidex values nearing 40 over the weekend.

“The heat event is expected to end Sunday night with slightly cooler temperatures expected on Monday after the passage of a cold front,” the warning page reads, adding hot and humid air can also affect air quality.

In southern Quebec, heat warnings are in place for a number of regions, including Metro Montreal. However, much of the southern part of the province is also facing risks of severe thunderstorms.

“Conditions are favourable for the development of severe thunderstorms that may be capable of producing strong wind gusts, large hail and heavy rain,” ECCC notes.

As for the heat, the agency says conditions will continue through Sunday night, with daytime humidex values hitting as high as 39 degrees.

Temperatures are expected to be more manageable overnight.

While no warnings are in place as of yet, the west coast is also anticipating higher temperatures in the days to come. On the South Coast of B.C., including the Metro Vancouver area, a blast of heat is expected to push temperatures into the 30s for part of the upcoming week.

Canadians are urged to prepare for hotter weather and to keep hydrated. When possible, seek out cooler locations and watch for signs of heat illness.

You’re also asked to check on loved ones and neighbours who may be more at risk of heat-related ailments.

The post Heat blasts parts of Canada with many warnings issued appeared first on CityNews Calgary.