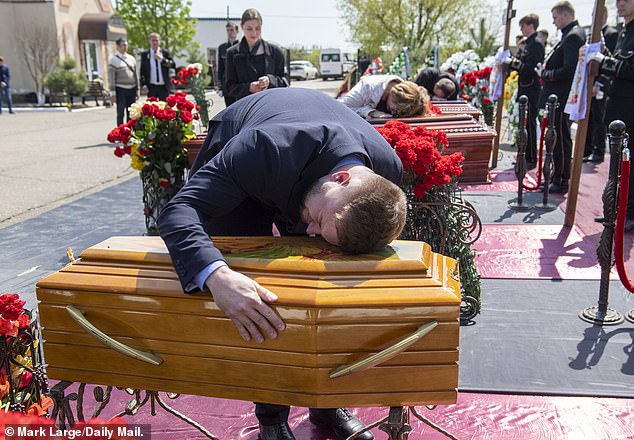 The moment he had to bid his final farewell – before the three coffins were borne away by pall bearers to the newly dug grave – was when Yuri Glodan at last gave himself up to an all-consuming grief.

His face racked with the pain of loss and of disbelief that on this sunny spring morning such a nightmare should be unfolding, he flung himself on each casket sobbing.

First that of his mother-in-law Lyudmila, then his wife Valeria’s – and finally the tiny, amber casket containing Kira, his beloved three-month-old daughter, with the smiling blue eyes she’d inherited from her mother.

Clutching one of her favourite soft toys, Yuri asked over and over why this had to happen to them, to his precious little family killed when two Russian cruise missiles had slammed into the third and fourth floors of their apartment block at 2.30pm last Saturday afternoon.

Eight people died in what has been described as Putin’s Easter massacre.

Eight people died in what has been described as Putin’s Easter massacre, including the three month old daughter Yuri Glodan, 30, pictured breaking down by her coffin

It had been such a happy day as Yuri, Valeria and Lyudmila prepared to mark Kira’s first Orthodox Christian Easter Sunday, a reason to celebrate amid the gruelling misery of these past weeks of war.

A chef and talented baker, Yuri had been working 13-hour shifts making Easter cakes for others. Now it was time for his own loved ones. He’d just slipped out to the supermarket for more provisions when the missiles struck. At that instant, everything was taken from him and three generations of a family were obliterated.

The funeral yesterday was always going to be an ordeal, but the 30-yea-old had displayed incredible composure and dignity throughout the hour-long service at the magnificent Transfiguration Cathedral on Odesa’s central Soborna Square.

Despite the harsh wail of air raid sirens earlier, Odesa had gathered to pay its respects, the crowd watching in sombre silence as at 11am, two white hearses arrived. The only sound was birdsong – and the constant whirr of cameras from the assembled media.

Sixteen men, dressed in black, approached the hearses and opened the doors.

Three of them lined up facing the cathedral, holding before them Yuri’s favourite photographs of the women he loved. Another three carried wooden crosses etched with the names, birth dates – and that fatal day of April 23, 2022 when he lost them.

Yuri’s wife Valeria, 28, pictured, his three month old daughter Kira and mother in law, Lyudmila Yavkina they were all killed when a Russian missile hit their apartment building last Saturday

Then the coffins: four pall bearers each for Valeria and her mother – but just two for the little Kira. Ashen-faced, the pall bearers struggled to contain their emotions as they moved towards the ornate main doors of the cathedral. Behind them came Yuri, dressed in a navy-blue suit and tie, accompanied by his mother Nina, sister Anastasia, and his father, also Yuri.

Inside, were around 100 mourners – family, friends, and neighbours – many of them distressed. One young woman wept uncontrollably throughout the service. Orthodox tradition is that the coffins of the dead usually remain open.

But the injuries to Lyudmila, Valeria and Kira made this impossible. Yuri held his mother’s hand as the mourners lined up to offer their condolences and place flowers in a steel basket next to the coffins. He described Valeria as ‘perfect. She was a gift from God’.

The outpouring of sympathy and love must help, but one wonders what comfort mere words can provide given the scale of Yuri’s loss.

He and Valeria were only starting out, Kira the first child of the family they planned to build together.

As the opening prayers began Anastasia, Yuri’s 21-year-old sister, tried to stem the tears streaming down her cheeks.

‘We are honouring the memory of a mother and daughter who tried to protect their child,’ Alexander Malichenko, the cathedral’s archpriest said. ‘We always need to remember that God is above us. He will punish those who committed these crimes.

‘These people, especially this child…’ he says, gesturing to Kira’s tiny coffin, ‘…they will be forever in heaven as heroes.’ Yuri’s gaze never left the coffins throughout the service which concluded with mourners lining up to cover them in red carnations.

A Russian missile strike on an apartment building in a residential area of Odesa. Yuri had just slipped out to the supermarket when three generations of a family were obliterated

Then, as the congregation poured back out on to Soborna Square, with Yuri calmly walking behind the caskets, two explosions echoed from faraway, a reminder that, even if they pray to God, Ukrainians are never far away from the threat of war.

For the short, final journey to the cemetery Yuri Glodan travelled in the hearse carrying his wife and daughter, perhaps lost in memories of happier times.

He had fallen head over heels for the former journalism student when they met at a party in 2013. Friends say he loved her infectious laugh, her positive outlook, and trademark bright floral dresses. The shared a passion for travel, photography, good food and fine wines and had a joyful wedding in August 2019. Just one week before her death, Yuri hosted a barbecue at their home to mark his wife’s 28th birthday. She celebrated with her two best friends, Alyona Syritka and Alexandra Ilyashenko.

Now, the young women were standing in front of her grave.

The eulogies they had written were read out by one of the funeral directors. Alexandra described a beautiful soul who had been ‘stolen away’ from her.

Alyona wrote of ‘dear Lera’ who discovered ‘the secret of life’ after the birth of her baby girl, of how Valeria and Lyudmila ‘were beside themselves with happiness when the little angel Kira appeared’.And then the flower strewn coffins of grandmother, mother and baby were lowered into the ground.

Just one tragedy, among tens of thousands of stories of heartbreak and loss in Ukraine since Russia’s invasion began, but the brutal end to Kira’s short life has touched millions across the world.