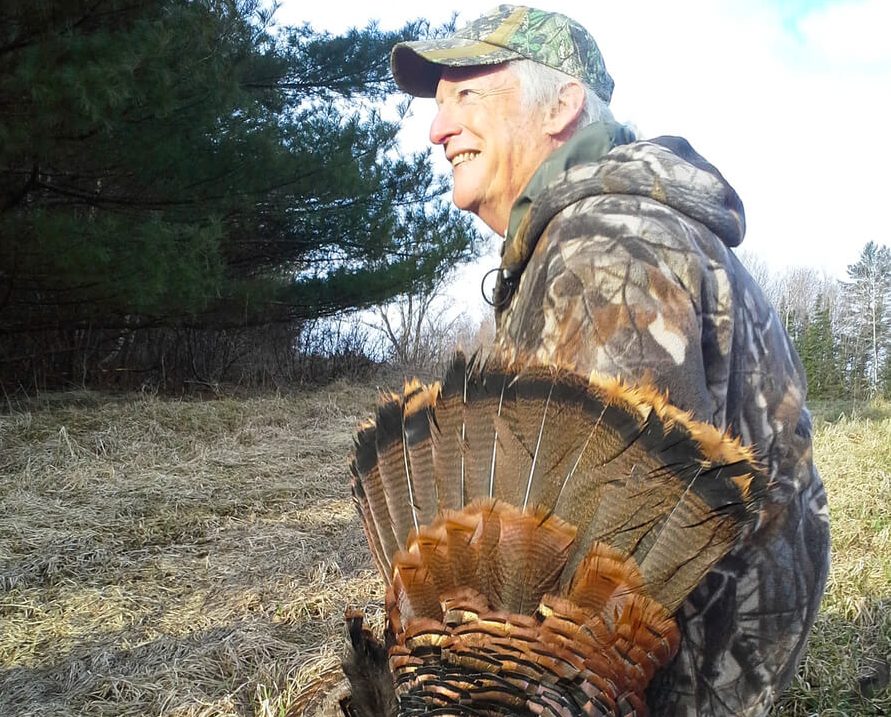 My father doesn’t hear well anymore, even with his hearing aids cranked. On the phone I get frustrated when he talks over me, or when there’s a long pause after I’ve shared something important.

“Dad, can you even hear what I’m saying?” I ask, not hiding my irritation.

“Not really,” he says, and then I try again, a little louder.

If I’m in a decent mood, I laugh it off, and he laughs along with me.

I should mention that he’s musically tone deaf — in fact, I think my entire family is tone deaf, myself included. That said, I carry a tune better than my father can, which has helped me in the more musical aspects of turkey hunting.

Which is to say: when we turkey hunt together, my father and I, I am the designated caller. That’s because operating a box call takes some degree of rhythm, some recognition of pitch and tone and projection. I’m no expert, but I’m the best chance we’ve got.

I’ve tried to teach my father techniques for subtle, quiet calls — the ones that seal the deal in bringing big, wary toms in those last few necessary yards. It hasn’t gone well.

Box calls are meant to sound raspy — like a hen that’s dying to meet a big, long-bearded tom. My dad’s call sounds, well, like a hen that’s simply dying, or choking on a corn kernel, or screeching for help as it’s strangled by a fox.

What’s more alarming is that he has, on numerous occasions, called in and shot toms while hunting alone, which speaks more to those particular toms’ inclinations to mate than it does my father’s calling. But I digress.

Once, about 15 years ago, my father and I, both novice turkey hunters, set up hen decoys on the edge of a field in Mercer. I remember the pine bark I rested against, and my father was to my right against another tree; him with the shotgun, me with the box call.

Turkey hunting is best first thing in the morning, and so we set up long before shooting light. I don’t remember hearing much of anything, just the occasional rattle of 18-wheelers along Route 2. I remember daylight slowly lifting and the greening field and my eyes itching from pollen and the feeling that nothing much was going to happen.

I remember the boughs above us swooshing in the wind, and a few crows riding the updrafts. I remember my calling: soft at first, then louder. I didn’t really know what I was doing, and my calls didn’t elicit responses.

It felt like we sat for hours and hours. By 8:30 I had grown restless. I swatted mosquitoes. My father watched the field intently. A few minutes later he leaned over and whispered: “Give a few more calls, then we’ll give it a half-hour. If nothing happens, we’ll get out of here.”

Relieved at having a plan, I fantasized about breakfast. I waited a few moments, then let off a series of low purs with the box call. I finished the series with a few loud, ear-ringing shrieks.

Immediately, a far-off gobble. My dad pointed in the general direction: “Did you hear that?” he whispered. I nodded.

One of the hardest components of turkey hunting is knowing when to call. You want to keep the tom’s attention, but you don’t want to overdo it by calling too much. I knew this, even then — I think my father had warned me.

I called once more, a series of two or three raspy vocalizations to which there were no responses.

We waited. I remember sweat rolling down my back, my stomach rumbling. Fifteen minutes, a half-hour. Nothing. The wind picked up. My father and I looked at each other. I shrugged.

I’m not sure why we waited longer. There was no logical reason to do so: I heard nothing but the wind in the trees, and my growing hunger noises. My body ached from sitting still for so long.

And that’s when I saw it: the big tom’s head as he approached along the field edge, left to right. If you think dinosaurs don’t exist you’ve never watched a tom’s red-blue head bob through trees like a velociraptor in miniature. My father saw it, too. He raised his gun and rested it upon his knees.

The tom was still well out of range, and every few feet it slowed and surveyed the field. When it got to 60 yards, it stopped completely, fanned, then spun like a top. It wouldn’t come any closer.

I waited and watched. The tom stood frozen. I scratched out a few soft clucks, barely audible, trying to recapture his attention.

It worked. In he came: full trot, head up, a steady march toward our decoys; silent, no gobbling. I heard the click of the safety.

When you fire at clay pigeons above a September field your ears trap the sound. When you fire your .308 at a target in late October the crack goes through your bones. When your father fires his 12-gauge at a giant tom you’ve called in in the first week of May, you hear nothing.

The tom is strutting and shining in the morning sun, black iridescence with a red-blue head and then he’s down, feathers rustling, spurs kicking the sky. There’s only silence, and your father’s look of disbelief, and your own mind trying to make sense of this impossibility made suddenly possible, made into reality, the sound of your own body moving again — loosening — reaching down and lifting the tom’s weight.

“Look at the size of that thing!” my father said. “He came in so quietly, he was just there all of a sudden! He liked those soft calls you made. He couldn’t resist.”

My father took a photo of me walking out of the field that morning, 21 pounds of turkey slung over my shoulder. He framed it for me a few years ago, and I keep the frame in my apartment.

Photographs like this one exist in one dimension: me in camo, back to frame, giant bird on my back. But still, somehow, the sounds remain within the photograph: swooshing pine boughs, father’s whisper, box call, gobble, safety click. I hear them all, somehow, in memory. I like to retrieve them this time of year, when the fields start to green. I hear the sounds, over and over. I know my father hears them, too, hears them even though he can’t hear my voice well anymore.