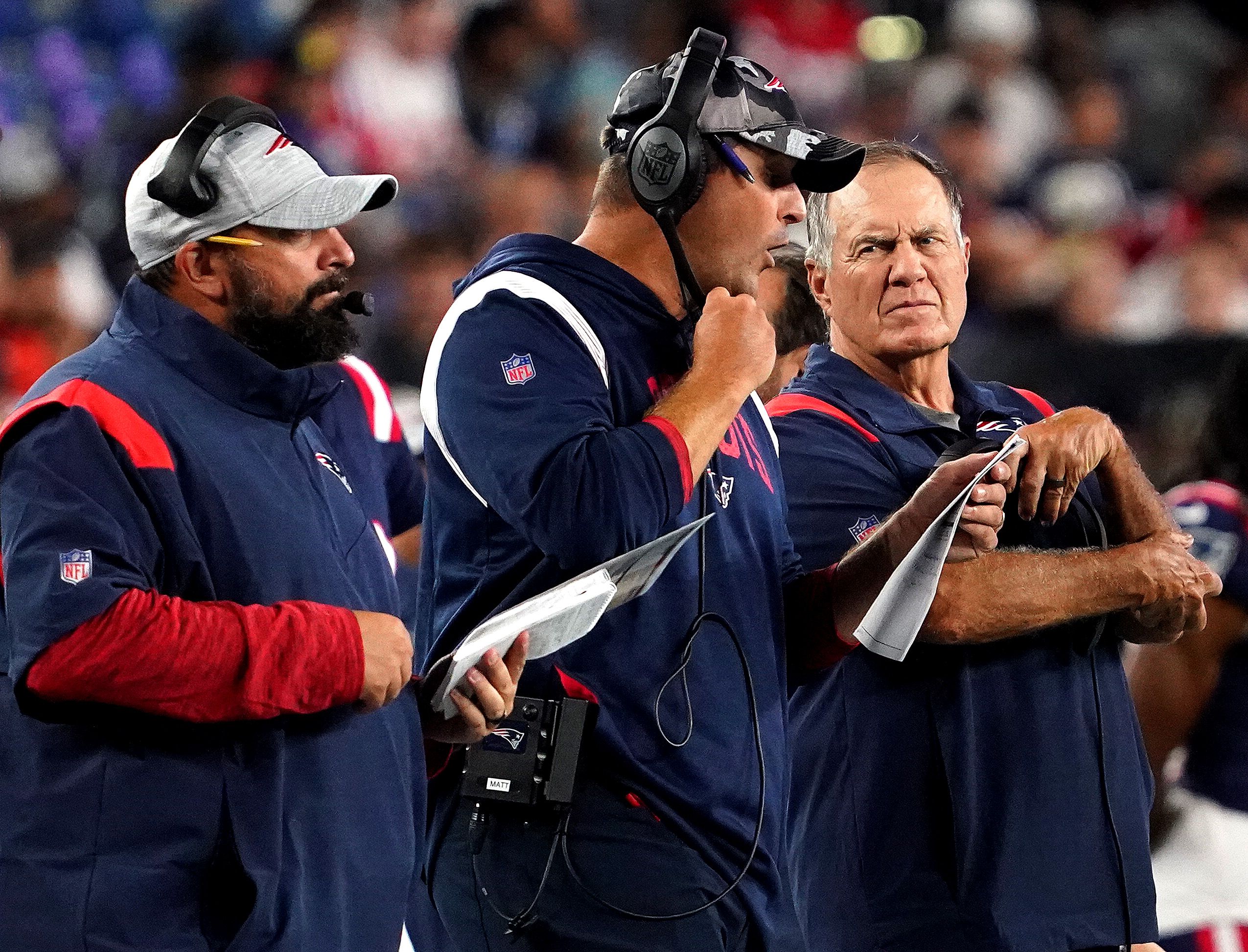 I’m all for any alternative to watching the Red Sox right now, but am I wrong in thinking that the signal-to-noise ratio for the Patriots’ preseason matchup with the Giants Thursday night was way too high?

I get the intrigue regarding which of the notoriously failed former head coaches, Joe Judge or Matt Patricia, is going to call the plays on offense. Thursday night, it turned out that both got a turn at the wheel, which would be unorthodox and concerning if the game had any stakes at all.

Bill Belichick has been obtuse and defiant about the play-caller situation, but that’s nothing new, and I figure he deserves a greater benefit of the doubt than any other coach in NFL history. That benefit of the doubt will begin to wane if he runs a Judge/Patricia job share as the de facto offensive coordinator, and for some of you it already has waned, but I’m going to wait until Mac Jones and the varsity actually play before drawing any conclusions.

The game itself at least provided a few morsels of mild interest. Tyquan Thornton, the speedy second-round pick out of Baylor, is already a more well-rounded receiver than his frequent comparison, Bethel Johnson, ever was, and I say that as someone who liked Johnson. When the Patriots drafted him, I figured Thornton would redshirt as an NFL freshman. Now I think he’s going to help this year, and it’s going to be an awful lot of fun when he does.

Bailey Zappe, the quarterback picked in the fourth round out of Western Kentucky, slung it around after some early jitters, forming a productive connection with 2021 seventh-round pick Tre Nixon. That was kind of fun. I think we’ve all seen Brian Hoyer throw enough August passes by now.

But those little points of interest must be weighed on the proper scale. Nixon looked capable, but what’s his absolute ceiling this season? The fifth receiver if those above him on the depth chart stay healthy? Maybe the fourth? Sure, occasionally a no-name scales the well-knowns above him and becomes a meaningful contributor — Jakobi Meyers’s entire career is a tribute to that kind of perseverance. But most of these early camp darlings will go the way of Brian Tyms, Bam Childress, and Zach Sudfeld.

And while I’m airing my grievances, allow me to also say that we already spend too many words, at least in comparison to the importance of the matter, speculating on who will lock down the final couple of roster spots. I do not remember such a debate, oh, back in 1979, when the likes of Don Westbrook and Carlos Pennywell were battling it out for the final receiver spot. We have more interest in the minutiae of building a football team now, but we had better perspective then.

After one preseason game in which the Patriots’ starters were mostly sideline bystanders, it’s probably no surprise that my general feelings about where the team stands remain the same as they were before kickoff.

I am confused, as I’m sure many of you are, as to why they’ve decided to replace the underpinnings of the offense. Simplifying the playbook makes sense — it should help newcomers to Foxborough get up to speed quicker on their obligations — but changing the scheme drastically does not.

Jones should be focusing on building on his fine rookie season rather than trying to learn Kyle Shanahan’s tricks from coaches who have never worked with him. The only logical reason for these changes is that Belichick and his staff believe they will help Jones maximize his skills in the long run.

I’m not sure I like what they’re doing on offense, but I do like who is doing it. No, the Patriots don’t have an elite receiver, and any Tyreek Hill-to-Miami envy is understandable. But it tends to go overlooked that they have an abundance of quality players.

We saw the benefits of the Damien Harris/Rhamondre Stevenson running back duo last season, and Stevenson is only going to get better. We must acknowledge that James White — a wonderful Patriot and better guy — retired Thursday. A healthy White would, of course, have been an asset — how many times, when the Patriots offense stagnated through the years, did you find yourself saying, “Just get White involved”? — but his decision came as little surprise given the condition of his hip. Fit that man for a red jacket already.

In the passing game, Jones is going to be able to spread the ball around. Kendrick Bourne is vastly underrated, Meyers is a rock, Hunter Henry developed excellent chemistry with Jones last year, Jonnu Smith and Nelson Agholor may well be salvageable, and Thornton is the deep threat.

And in the ultimate addition-by-subtraction move, we no longer have to try to convince ourselves that N’Keal Harry has untapped potential. Injuries altered his career here, but a lack of instincts really held him back.

Defensively, they’ve swapped out experience for quickness at linebacker, and we’ll see how that goes with the likes of Mack Wilson Jr., Cameron McGrone, Raekwon McMillan, and Anfernee Jennings in the mix. Josh Uche needs to be more than a preseason all-star. Matt Judon must rediscover his ferocious form from the first 10 games of last season.

What else? Christian Barmore has Pro Bowl capabilities and perhaps more than that. I love the Devin McCourty-Kyle Dugger-Adrian Phillips safety trio. Ballhawk J.C. Jackson, gone to the Chargers, will be difficult to replace, but rookies Marcus and Jack Jones look promising.

I hope Malcolm Butler, out there with the backups Thursday night, sticks and avoids being told “Malcolm, go” in a different context. His who-is-this-guy training-camp ascent, back in ‘14, was one of the best stories of preseasons past. It was the rare time when the outsized attention paid to the back of the roster proved worthy of the hype.

Oh, and by the way, I think the Patriots kept both Carlos Pennywell and Don Westbrook back in ‘79. Neither usurped Stanley Morgan or Harold Jackson. You know, in case you were wondering.