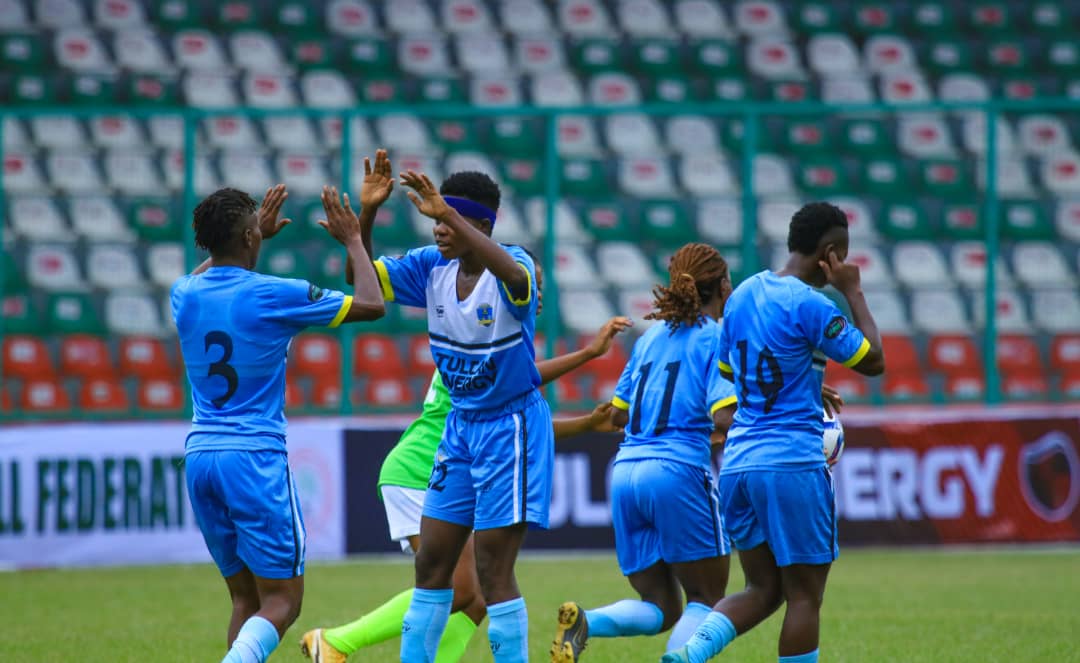 Bayelsa Queens defeated reigning champions Rivers Angels 2-1 in the opening game and it was Gift who scored the winning goal.

Having faced a three point loss for failing in the opening game for failing to abide by the statute of the NWFL, Naija Ratels were hoping to give a good account of themselves.

However, it took just 11 minutes for thr first goal to be scored through Gift as her 25 yards shot beat Naija Ratels goalkeeper, Doris Ohia.

Bayelsa Queens seem gained more traction from that Monday Gift’s goal. They are actually enjoying some possession, most especially at the midfield.

Five minutes to end the first half, Gift scored her brace of the game as she nodded
in from a set piece taken by Blessing Illivieda.

Bayelsa Queens resumed the second half pressing high to get more extend their lead and in the 59th minute, scored to make it 3-0.

Three minutes later, Gift scored to become the first player to score a hat trick in the 2022 NWFL Premiership Super 6.

However, she did not complete the game as she was substituted for Zambian midfielder Natasha Witika in the 77th minute.

Bayelsa Queens now have six points from two games to sit atop of the NWFL Premiership Super 6 after two games.

Meanwhile in the other game Matchday 2, Edo Queens suffered a 1-0 loss to Nasarawa Amazons.

Edo Queens had played out a goalless draw with Delta Queens in the opening game on Monday.

A 7th minute spot kick from Dooshima Tarnum was goos enough for the ‘Solid’ Babes to get a victory.

It was a second win for the Amazons who were awarded three points on Monday. by the NWFL after Naija Ratels refused to use the sponsors jersey.

They are second on goal difference with Bayelsa Queens.

The final Matchday 2 game between Delta Queens and Rivers Angels ended goalless as the Okowa Ladies continue to search for their first win.

Delta Queens played out a 0-0 draw in their opening game on Monday while Rivers Angels were defeated 2-1 by Bayelsa Queens.