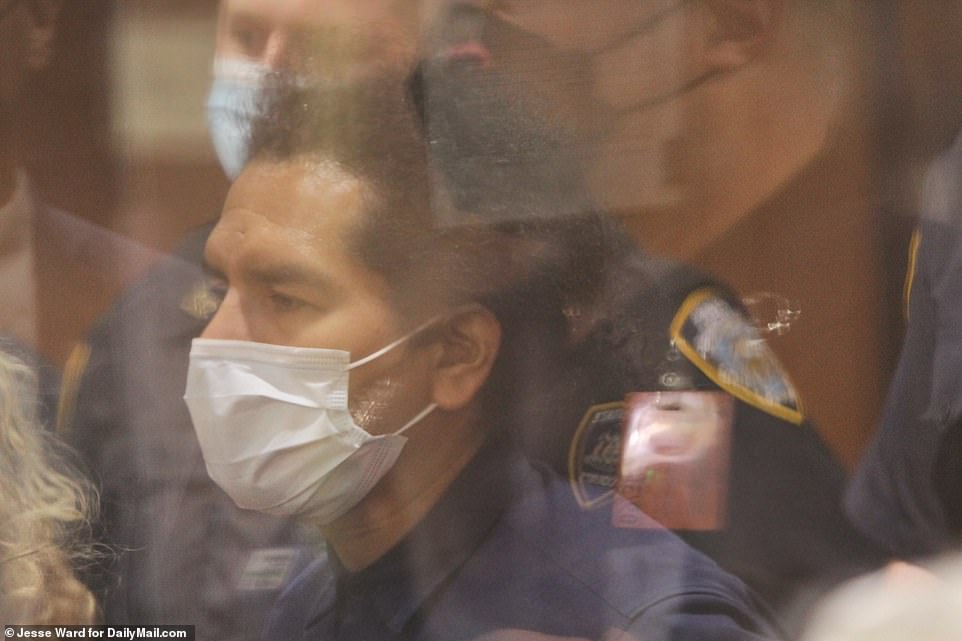 Murdered Queens mother Orsolya Gaal left a note on her fridge reminding herself to ‘get a new handyman’ days before she was stabbed to death by her handyman lover in a frenzied attack.

David Bonola, 44, slashed Gaal’s throat then stabbed her in the body more than 50 times in a fury on April 15th. He then stuffed her body in her son’s hockey bag and wheeled it down the street in Forest Hills, Queens, leaving it for a dog-walker to find the next day.

Bonola was charged yesterday with the murder and with criminal tampering. He made a chilling confession to police on Wednesday night, then ate a cream cheese bagel, according to sources cited by The New York Post.

Bonola had been Gaal’s handyman. The pair met when she hired him to do work on the home where she lived with her husband Howard and their two sons.

They had an on-off romance for two years until last week. It seems that it had gone sour again despite the pair reconciling in April.

When police searched the married mother’s house, they found the note on the fridge, according to The Daily Beast.

David Bonola, 44, was arraigned in Queens Supreme Court on Thursday in the murder of Orsolya Gaal in her Forest Hills home

David Bonola is shown on Thursday being marched out of the 112th Precinct in Queens for the murder of his girlfriend, married mother-of-two Orsolya Gaal

David Bonola, 44, was arrested on Thursday in the early hours of the morning. He was spotted by police on Wednesday night and brought in for questioning then confessed to murdering Orsolya Gaal, 51, in her home on April 16 shortly before 1am

Queens District Attorney Katz revealed on Thursday night that he ‘slashed’ her throat and then proceeded to stab her elsewhere on the body more than 50 times.

‘Two boys are left without a mother and a young teenager faces the added trauma of being home when this heinous murder took place,’ Katz said in a statement.

‘As alleged, the defendant stabbed the victim over 50 times and then attempted to dispose of the body by stuffing it into a duffel bag and dragging it across a quiet residential neighborhood – leaving a trail of blood and a terrified community,’ she added.

In a surveillance video just hours after the murder, Bonola could be seen walking along 114th Street near his apartment in Richmond Hill, just after 6 a.m. on Saturday morning.

Bonola in the video can be seen with a bandage wrapped around his left hand as he makes his way down the street before heading into his apartment.

Later on Saturday, Bonola allegedly headed to a CityMD in order to receive help for cuts on his hands. He was referred Bellevue Hospital after urgent care doctors said the wounds were too deep for them to treat.

Gaal’s home in Forest Hills, Queens. Tributes to the slain mother remain outside on a tree. Her husband and sons have not returned to the property

Police say that Gaal and Bonola, who had done handyman work for her, had been having an on-off affair for two years before he murdered her with a kitchen knife in her basement last week, while her 13-year-old son was upstairs.

According to the NYPD, Bonola had gone over to the home in an attempt to resurrect the affair as the relationship had come to ‘the end’.

The criminal complaint charging Bonola cites both surveillance video footage and his own ‘statements and admissions’ as evidence in the case against him.

Bonola, who hails from Mexico and had moved to the U.S. more than 20 years ago, was arrested on Thursday in the early hours of the morning.

He was spotted by police on Wednesday night and brought in for questioning, where cops say he confessed to murdering Gaal in her home on April 16 shortly before 1 a.m.

Police sources who spoke with the New York Post say he spilled his guts in an entirely ‘matter of fact’ manner – and then proceeded to eat a bagel with cream cheese as if nothing had happened.

‘It was very matter of fact, very thorough, he answered every question they had,’ a police source told the newspaper. At no point did he request a lawyer.

Then, as he was put in a police car on Thursday in front of journalists asking why he killed her, he screamed: ‘F**k you motherf****r!’

Bonola, who hails from Mexico and had moved to the U.S. more than 20 years ago, was arrested on Thursday in the early hours of the morning

Bonola and the victim first started seeing each other in 2020 after he worked in the family home where Gaal lived with her 53-year-old husband Howard and two sons. It was an on-off relationship which they rekindled in April, but which had recently ended again.

According to NYPD sources, Bonola had gone over to the home in an attempt to resurrect the affair after it had come to ‘the end’.

On Friday night, not long after midnight, Gaal let Bonola into her home. It’s unclear if she had invited him over, or if he showed up unannounced. They went inside and down to the basement because her youngest son, Leo, was upstairs at the time. Her husband Howard and oldest son Jamie were out of town looking at colleges.

Down in the basement, the pair began arguing, police said. Bonola allegedly went to the home that evening ‘to speak about the relationship again.’

‘A heated argument ensues between the two in the basement. A knife is brandished. A violent struggle ensues, resulting in our victim being stabbed ruthlessly and brutally in excess of 55 times, causing her demise,’ NYPD Chief of Detectives James Essig explained.

At some point, the pair started arguing and Bonola stabbed her 58 times using a knife that he found inside the house. The murder weapon was left at the scene.

‘Mr. Bonola then retrieved the hockey bag belonging to Ms. Gaal’s son, placed her in the bag and as video showed, was seen rolling the body down the sidewalks, leaving a bloody trail through the streets of Forest Hills,’ Essig continued.

He then retrieved her son’s hockey bag and waited until 4am, then wheeled her body out of the home and dumped it less than half a mile away. He also sent a text to Howard Klein, Gaal’s husband, claiming to have been someone she once sent to jail in a failed attempt to throw police off his scent.

Bonola then walked to his own home, through Forest Park. The next day, he went to hospital for treatment for wounds on his hands.

Detectives had leads that pointed them to a location ‘where boots, a T-shirt and bloody bandages were discovered.’

Surveillance footage from around 4:30am appears to show figure pulling a similar-looking bag along the sidewalk.

On Wednesday night, as police officers were canvassing the area in Queens for video footage, they spotted Bonola and approached him. They knew about the affair and wanted to question him so brought him in for questioning at the 112th Precinct, where he confessed to the entire murder.

At a press conference on Thursday, NYPD detectives revealed he had worked as a handyman in Gaal’s family home and was ‘known to the family.’ It’s unclear if Gaal’s husband Howard Klein was aware of their affair.

Bonola, 44, was arrested on Thursday in the early hours of the morning. He was spotted by police on Wednesday night and brought in for questioning then confessed to murdering Gaal in her home on April 16 shortly before 1am

The handyman is shown on Thursday. He confessed to the murder once in custody on Wednesday night

The kitchen knife used by handyman David Bonola to stab Orsolya Gaal 58 times in the basement of her home. Police think he took it from the house

‘We believe the relationship that Mr. Bonola had with our victim was a intimate-type relationship and this stemmed to be a domestic-type dispute that they were having over their intimate relationship,’ said NYPD Lt. Tommy Thompson from the Queens North Homicide squad.

‘They had been off and on and they had broken up prior but had reunited early in the month of April and their relationship was considered at an end,’ NYPD Detective Julie Morrill added.

Bonola lives in Richmond Hill, a neighborhood in Queens that is a stone’s throw from where Gaal lived with her family.

Gaal had spent Friday night at a show at the Lincoln Center in Manhattan with girlfriends.

She then returned to Queens sometime before 11pm, stopping in for a drink at the Forest Hills Station House, where she had a Moscow Mule. She then walked home to Juno Street.

It’s unclear if her killer was already inside the home or if she let him in afterwards but at 12.40am, she was stabbed 58 times in the neck, torso and arm.

Her 13-year-old son Leo was upstairs in the house at the time but did not hear anything.

‘We believe Mr. Bonola arrives between 12.30am and 12.40am. He is a handyman who is employed by Mrs Gaal. They had been having an intimate affair for 2 years.

‘Bonola is either let in voluntarily or he uses a key that he knows is kept in the barbecue. A heated argument in the basement ensues and then a violent struggle before Bonola ruthlessly and brutally stabs Mrs Gaal in excess of 55 times, causing her demise.

‘Bonola then retrieved a hockey bag belonging to the son… After disposing of the body, Mr. Bonola fled through Forest Park, where investigators discovered the jacket worn by him.

Gaal with her sons, 17-yearold Jamie and 13-year-old Leo, and husband Howard Klein on Christmas Eve in 2021

Bonola commented on these photos of Orsolya Gaal telling her she had the look of love, left, and was ‘the most beautiful woman

David Bonola, 44, was charged on Thursday with murder, criminal tampering and criminal possession of a weapon. He made a full confession to killing Orsolya Gaal after being arrested

Bonola lives in this building in Richmond Hill, Queens. The building was taped off on Thursday

Clothes outside the home of the killer on Thursday. Police seized his blood-soaked boots and t-shirt he was wearing when he committed the crime

‘On Saturday, he received treatment at a local area hospital for wounds on his hands.’

‘At this time, he has no (prior) arrests that we know of. There are no outstanding suspects,’ Chief of Detectives, James Gessig, said at a press briefing.

Police said they received a call around 8:10am on Saturday morning for a report of ‘a suspicious bag with blood on it at the corner of Metropolitan Avenue and Jackie Robinson Parkway.’

Gaal’s body was found the next morning by a dog walker who called police. Cops then followed a trail of blood left by the dragged bag, leading back to Gaal’s home.

They found son, Leo, inside unscathed and took him in for questioning, putting him in handcuffs, before letting him go later that day.

Gaal’s husband Howard and her older son Jamie, who had been on the West Coast, rushed back. They have not been seen or heard from since.

This is believed to be Orsolya Gaal’s killer, dragging her body along the sidewalk after stabbing her nearly 60 times in her basement in Queens on Saturday

At a press conference on Thursday, NYPD detectives revealed the pair had a two-year, on-off romance

Those living and working near Bonola’s 114th Street home described him as being something of a ‘night owl’.

Bonola had been married once before and had two sons of his own with a woman who had later died. A local said that Bonola had also served in the Mexican army.

A local florist, Martin Calixto, said that Bonola would often stop by and buy a single red rose each and every time.  He even recognized Gaal from photos that Bonola had showed him in the past.