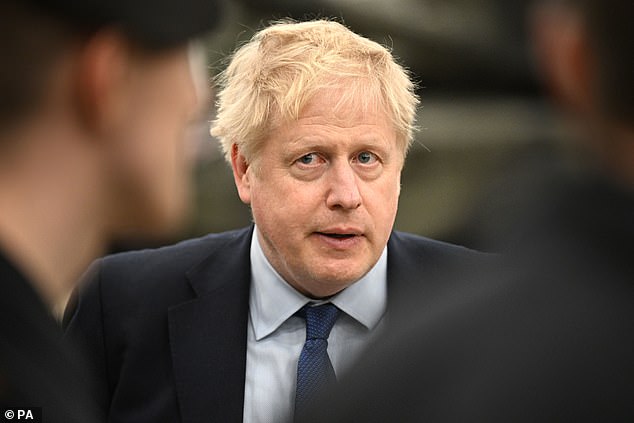 Families have been left ‘infuriated’ at MPs 2.7 per cent annual pay rise next month after a watchdog declared that they have been working harder during the pandemic.

Peers are likely to see their tax-free daily ‘attendance allowance’ increase by the same proportion, to £332.

Downing Street previously urged ‘restraint’ on MPs’ pay this year despite the cost of living crisis, while Keir Starmer has called for a freeze.

But families have been left ‘infuriated’ after it was announced Commons salaries are being hiked at the same time as voters face a painful £12billion increase in national insurance and soaring energy bills.

The average household energy bills are set to hit £3,000 this year and petrol could reach £1.70 a litre after the price of oil passed $100 a barrel, experts have warned.

Britons are braced for the price of gas, electricity, petrol, holidays and even a loaf bread to soar as the invasion of Ukraine tightens the squeeze on the cost of living.

And food prices are rising at near-record levels amid supply chain pressures and the Covid aftermath.

One immediate effect was for stock markets in London and the rest of the world to fall – knocking a big hole in people’s pensions and savings.

Meanwhile, Labour MP Zarah Sultana slammed the Commons pay rise and branded it ‘wrong’ because ‘ordinary people are facing a Tory cost-of-living crisis’. She also added she will be donating her £2200 to foodbanks and other local charities.

Families have been left ‘infuriated’ at MPs 2.7 per cent annual pay rise next month after a watchdog declared that they have been working harder during the pandemic. Pictured: Prime Minister Boris Johnson

The average household energy bills are set to hit £3,000 this year and petrol could reach £1.70 a litre after the price of oil passed $100 a barrel, experts have warned. Pictured: A Shell petrol station near London Bridge on Tuesday

She wrote earlier today: ‘Today the independent regulator said MPs will get a £2200 pay rise. I believe this is wrong: Ordinary people are facing a Tory cost-of-living crisis. They should get a proper pay rise, not well-paid MPs. That’s why I will donate mine to Coventry Foodbank and other local causes.’

Many have taken to Twitter to express their anger over the ‘majority of MPs who live in a bubble’.

One user wrote: ‘This is ridiculous. So many people are in poverty and MPs, who can claim expenses on top of their current salary, are getting a pay rise. Infurating.’

Another branded it ‘a sick April Fool’s joke’.

‘Then add food, fuel and everything else. Meanwhile, MPs will get expenses paid on top of a £2000 pay rise. This government is out of touch with reality.’

One more angry user wrote: ‘100 per cent this is wrong. People are struggling with everything going up, yet their wages are now. I, myself have had a pay freeze and had nothing in the last three years, but the cost of living is still increasing. I swear the majority of MPs live in a bubble.’

Average fuel prices have skyrocketed to their highest level ever as Russia‘s brutal war on Ukraine continues to impact people across the world, official figures show.

The Department for Business, Energy and Industrial Strategy’s statistics said a litre of diesel rose from 151.95p to 153.36p over the same period.

Separate figures, also released today by Experian Catalist, instead claimed the average cost of petrol had hit 151.16p while for diesel the data firm said it was 154.75p.

Oil prices have calmed after reaching an eight-year high last week amid concerns over the reliability of supplies after Russian troops entered Ukraine. This affected wholesale prices paid by fuel retailers.

The recent barrage of storms that have battered Britain – Dudley, Eunice and Franklin – were also pointed to as factors because it was too dangerous for some ships carrying fuel to dock.

Meanwhile, Bank of England governor Andrew Bailey recently urged people not to push for big pay rises, despite energy costs going through the roof and fears inflation will soar even further to 7.25 per cent in April.

However, he was slapped down by No10, with the PM’s spokesman saying it is not for the authorities to dictate how private companies should pay their workers.

Announcing the rise today, Mr Lloyd said: ‘This is the first increase in pay for MPs in two years and follows the average of increases across the public sector last year. MPs play a vital role in our democracy and this is reflected in their pay.

‘It is right that MPs are paid fairly for the responsibility and the unseen work they do helping their constituents, which dramatically increased last year. For Parliament to reflect society, it is vital that people from all walks of life can be an MP.’

John O’Connell, chief executive of the TaxPayers’ Alliance, said: ‘Working households will be furious to see MPs’ pay go up while they face crippling tax hikes.

‘Elected officials should show restraint and only accept rises when economic conditions allow.’

Ipsa was given control of politicians’ salaries after the credit crunch, and the watchdog has linked increases to changes in average public sector earnings for October.

The Office for National Statistics revealed in December that the figure was 2.7 per cent.

The House of Lords has committed to following the uprating used by the Commons. That would see the daily allowance for peers – who do not usually receive a salary – go up from £323 to £332.

Although the rise is below inflation, it will likely heap pressure for police and other public sector workers to get significant settlements.

A poll for MailOnline last month suggested it will be hugely unpopular with the public.

The Redfield & Wilton Strategies research found 64 per cent were opposed – with 45 per cent saying they felt strongly.

Just 16 per cent were in favour, including six per cent who strongly backed it going ahead.

Inflation is running at a 30-year high of 5.4 per cent with fears that

T he PM’s official spokesman said in January: ‘I would say we would expect restraint on matters like this given the current circumstances, but beyond that I think it’s right that we let Ipsa set out their proposals as an independent body.’

Sir Keir said: ‘I think that MPs do not need a pay rise and we should all be saying that we don’t need that pay rise and it shouldn’t go ahead.

‘The mechanism is independent but I think it’s for me, as Leader of the Opposition, to say that I do not think we should have that pay rise.’

From energy bills to bread, fallout for British families

Fuel prices are already at a record high, with petrol costing an average of £1.49 a litre and diesel almost £1.53.

The invasion sent the price of Brent crude – the global oil benchmark – above $105 a barrel for the first time since August 2014.

Russia is one of the world’s largest producers of crude oil and analysts said the price could rise to $120 a barrel if supplies were restricted.

Such a rise would mean petrol prices could top £1.70 a litre.

Britain relies on Russia for almost a fifth of its diesel supply.

If they stayed at that level, annual household bills could rise to £3,000 in October, according to Investec analyst Martin Young.

Britain takes about three per cent of its gas supplies from Russia, but wholesale gas prices are determined globally.

The FTSE 100 index has suffered its biggest one-day fall since June 2020, wiping £90billion off the value of the UK’s biggest listed companies.

Any prolonged impact on the financial markets will also affect British pensions, as most pension funds invest primarily in stocks and bonds.

The Centre for Economics and Business Research think tank has warned the crisis could also fuel inflation.

Russia and Ukraine export almost a third of the world’s wheat supplies, prompting fears of a global rise in the cost of bread.

The two countries account for around 29 per cent of global wheat exports, 19 per cent of world corn supplies and 80 per cent of sunflower oil exports.

World food prices are already near a ten-year high, driven by strong demand for wheat and dairy products, according to the UN food agency.

Russia’s cyber capabilities could see it launch attacks against the West.

Officials fear that the NHS, local government and banking systems could all be prime targets for Moscow.

The National Cyber Security Centre has issued a warning to businesses and institutions to beef up their defences in anticipation of a potential Russian attack.

Ukraine’s neighbour Poland is preparing for a massive influx of up to a million refugees fleeing the conflict.

Senior officials in the US have warned that up to five million people could try to escape to neighbouring countries.