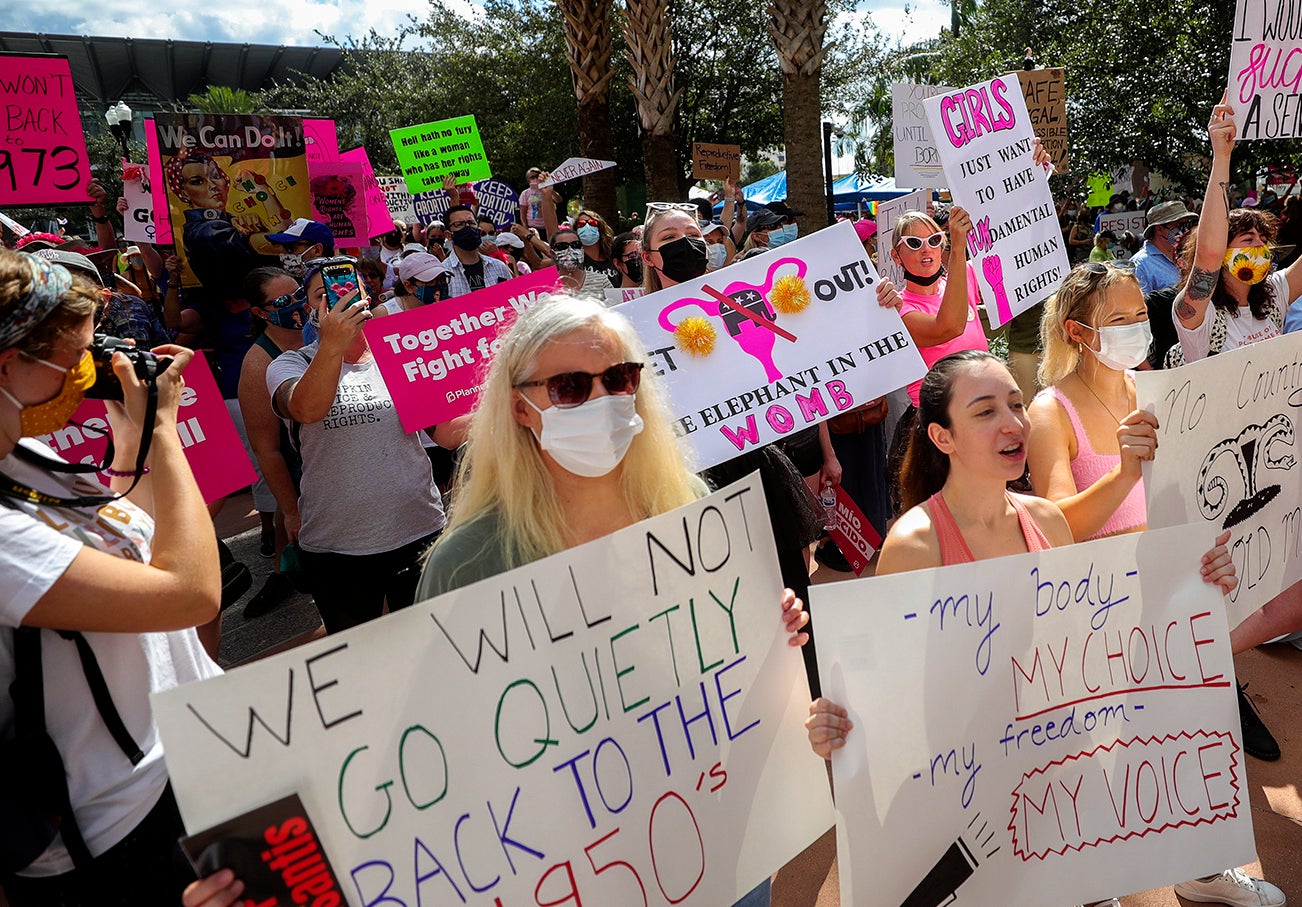 MIAMI — Florida legislators voted to ban most abortions after 15 weeks of pregnancy on Thursday, a move that would severely restrict access to the procedure in a state that for decades has been a refuge for women from across the South.

The bill — modeled after a similar abortion ban in Mississippi that the U.S. Supreme Court appears poised to uphold — now heads to the desk of Gov. Ron DeSantis as part of a sweeping push by Republicans to put the state at the forefront of the nation’s culture wars. Other legislation on the verge of passage includes banning instruction about sexual orientation or gender identity in some elementary school grades, and allowing parents to sue public school districts if students believe that their teacher sought to make them feel discomfort about a historical event because of their race, sex or national origin.

Impassioned critics have nicknamed that first proposal the “Don’t Say Gay” bill. Eager proponents have called the second bill the “Stop Woke Act.” Both are expected to pass before the final day of the legislative session on March 11.

“We’ve accomplished more in this state than anyone thought possible,” DeSantis told a raucous crowd at the Conservative Political Action Conference in Orlando last week, “but I’ll tell you this: We have only begun to fight.”

The efforts come amid a surge of conservative activism on social issues at the state level across the country. On Thursday, Gov. Kim Reynolds of Iowa signed into law a measure banning transgender girls and women from competing in female sports at state schools and colleges. In Texas, where the Legislature met in 2021, Republicans restricted abortion and the teaching about race in schools and expanded gun rights.

Republicans have controlled the Florida governorship and both legislative chambers since 1999. But the state remained nail-bitingly competitive in presidential and some state elections, a reflection of how its politics have mirrored the country’s: often evenly split, with its leaders wary of alienating voters if they moved too far to the extremes.

However, as national politics have become more polarized, so have Florida’s. The state’s more reliably conservative bent, the favorable environment for Republicans in the upcoming midterm elections and DeSantis’ evident presidential ambitions have emboldened Florida’s leaders to pursue legislation that would have previously seemed too divisive.

State representatives passed legislation last week that would prohibit instruction about sexual orientation or gender identity between kindergarten and third grade, “or in a manner that is not age-appropriate or developmentally appropriate for students in accordance with state standards.”

The same day, representatives also approved legislation that would prohibit schools from using teaching materials — and businesses from providing training to their employees — that say an individual is “inherently racist, sexist, or oppressive, whether consciously or unconsciously.”

Supporters have argued that the proposals empower parents. That message has become a national Republican rallying cry in pushing back against the teaching of institutional racism after the police killing of George Floyd and against school closures and mask mandates during the coronavirus pandemic.

Opponents have countered that the sexual orientation and gender identity bill would cause a chilling effect in classrooms beyond elementary school and harm and exclude LGBTQ youth, who are already at higher risk of bullying and suicide than their peers, and that the bill about how to teach history attempts to unfairly penalize teachers and dismiss the country’s racist past.

Democrats number so few in the state Capitol that they are unable to block or amend most legislation. Sen. Lauren Book of Plantation, the minority leader, referred to the days remaining until the session’s end as “hell week.”

“This is probably one of the worst sessions that I’ve seen, where we’re taking issues that are going to deeply, deeply affect Floridians,” she said.

Last year, the Legislature passed laws toughening penalties against protesters and banning transgender athletes from competing for certain public school teams. Pocketbook issues, like the high cost of housing across the state or how many low-income Floridians do not have access to health care, have mostly gone unaddressed, Democrats have lamented.

Their frustration has led to anguished public debates, sometimes with raised voices and tears. Female lawmakers on both sides of the abortion issue shared deeply personal stories about their own sexual assaults, pregnancies and abortions. In one instance, Democratic lawmakers said a Republican representative swore at them after a protest erupted near the end of a five-hour debate about the abortion bill, which passed in the House along party lines.

“This bill puts politicians, bureaucrats and the government between a woman and her access to health care,” Sen. Janet Cruz, D-Tampa, said Thursday. “It will absolutely result in a women seeking unsafe abortions and dying as a result.”

Florida currently allows abortions until 24 weeks, with fewer restrictions than other Southern states. The new, more restrictive proposal, which includes no exceptions for cases of rape or incest, passed by a 23-15 party-line vote Thursday night after an emotional debate in the state Senate. It was approved last month by the state House, and DeSantis has signaled his support.

The Supreme Court is likely to uphold the similar Mississippi law this summer. Such a ruling could upend Roe v. Wade, the 1973 decision that established a constitutional right to abortion and prohibited states from disallowing the procedure before fetal viability, or about 23 weeks. Similar 15-week bans are under consideration in Arizona and West Virginia.

“A child in the womb is the most vulnerable person in the world because they’re utterly helpless,” Sen. Danny Burgess, R-Zephyrhills, said before Thursday’s vote. “They have no voice, they have no vote. They rely on another person for everything, and they still matter.”

In Florida, proponents of banning abortions after 15 weeks have argued that there is significant fetal development by that point. They have also explicitly cited the Mississippi case and said they want Florida to be in position to reduce the number of abortions right away after a ruling upholding that law.

Florida has been on the cusp of significantly limiting abortions for some time, with opponents targeting the state for its relatively high rate and number of abortions. Pregnant women from other Southern states with more restrictive laws have long traveled to Florida for the procedure.

In the past, the Florida Supreme Court has interpreted the right to privacy included in the state constitution as extending to abortion rights. But the court has turned more conservative in recent years following the retirement of several justices, who have been replaced by DeSantis appointees.

Some Republicans hoped to seek an abortion ban after six weeks of pregnancy, like the one adopted last year in Texas. Sponsors of the 15-week ban in Florida cast their legislation — which once might have seemed unthinkably restrictive considering U.S. Supreme Court rulings — as a compromise. (Exceptions would be allowed if two separate doctors could detect a “fatal fetal abnormality.”)

“That’s a great start,” Andrew Shirvell, the founder for Florida Voice for the Unborn, a group that is against abortion, told senators at a committee hearing. “But you all need to do a heck of a lot more.”

Last year, out of the roughly 68,500 abortions performed in Florida, about 4,100 were performed between 13 to 24 weeks of pregnancy, according to state data compiled for the Senate.

Mary Ziegler, an abortion law expert at Florida State University, said that the 15-week cutoff for abortions suggested that Republicans realized they could go only so far without alienating a significant portion of the electorate.

“At least some Florida Republicans perceive the Florida electorate as being more pro-choice than it would be in Georgia or Alabama,” she said. “They’re trying to do enough to please the anti-abortion base and anti-abortion donors.”

If DeSantis signs the bill or lets it become law without his signature, Florida could serve as a bellwether for conservative states that do not immediately decide to ban abortion outright if Roe v. Wade is overturned, she added.

“If you listen to Florida Republicans, they’re saying, ‘We don’t think it’s a really good idea to do any more of this right now,’” she said. “So Florida is the place to watch.”