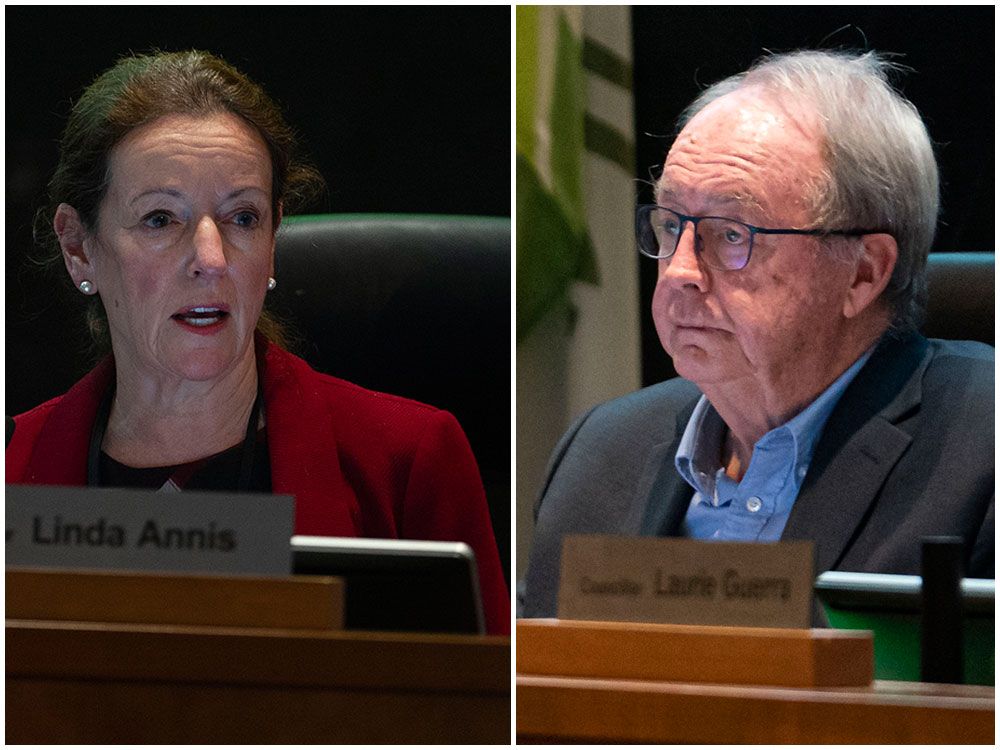 Surrey  council will vote on Monday whether to order the city’s ethics commissioner to stop accepting new complaints until after October’s municipal election.

Surrey’s mayor, Doug McCallum, is already the subject of a complaint filed with the  commissioner by Surrey Police Vote, which is demanding a referendum on the setting up of a city police force and the ending of the policing contract with the RCMP. Surrey First councillor Linda Annis said other councillors may be facing ethics complaints as well.

A motion directing staff to draft a proposed bylaw amendment was made during an in camera council meeting, meaning few details about the proposal have been made public.

The motion appears to mean that existing complaints would still be handled by the ethics commissioner.

Reece Harding, the ethic commissioner, said in a statement that his office “will respect the ongoing council process,” but would not comment further.

Council is set to vote on preliminary approval of the bylaw change on Monday evening.

“This council has been very, very challenged, to have an open and transparent process,” Annis said. “Residents have every right to be extremely concerned. What is it we’re trying to hide?”

“This was to serve the public’s interest and not to shield elected officials,” said Coun. Jack Hundial, one of the councillors behind the creation of the commissioner.

Surrey Police Vote filed its complaint against McCallum in September, alleging intimidation of and interference with its volunteers. The group was collecting signatures for a petition to hold a referendum on the plans to replace the Surrey RCMP.

“We haven’t seen such draconian steps since former U.S. President Richard Nixon fired the special prosecutor in the Watergate investigation,” said Bill Tieleman, a strategist for the Surrey Police Vote campaign. “Mayor McCallum and his councillors are taking the same kind of stonewalling efforts to stop Surrey residents from having an independent investigation into any ethics issues involving elected officials in the city.”

“We want the city council to immediately stop this process,” Tieleman said. “There should be an apology to the commissioner and they should pull this thing off the table.”

One part of Surrey Police Vote’s complaint involves the mayor’s use of public funds for personal legal bills.

McCallum was charged with public mischief by the RCMP last year for filing a complaint alleging his foot was run over by a car at a grocery store parking lot in September during a confrontation with a volunteer gathering signatures for the petition.

Surrey taxpayers are currently on the hook for McCallum’s legal bills in the case.

The mayor did not respond despite several attempts to reach him for comment.

According to the motion about the bylaw published following the meeting, no investigations would be processed from Jan. 31 until the Surrey general election in October 2022.

“Why on earth would we expect there’ll be no ethics complaints of any validity between February and October of this year?” Tieleman asked.

He said the ethics commissioner was responsible for handling ethics issues and questions involving city staff as well as council members, saying “citizens are being denied the right to make a complaint.”

The ethics commissioner’s office received 33 complaints in the 2020-2021 fiscal year and conducted a half dozen formal investigations. The high volume of complaints meant the commissioner had limited time to focus on “proactive advice and education” for Surrey city staff and council, according to the commissioner’s latest annual report .

“Council is demonstrating that we’re not listening to the people and we’re not being open and transparent,” said Annis. “How can our ethics commissioner and the independent investigation process be taken seriously if it can be stopped by politicians who are often the subject of a complaint, it’s ridiculous,” added Annis.

“Almost every day we from residents concerned about the actions of Surrey Council.”

Tieleman agreed. “This is a blow to Surrey’s reputation that it really doesn’t need.”