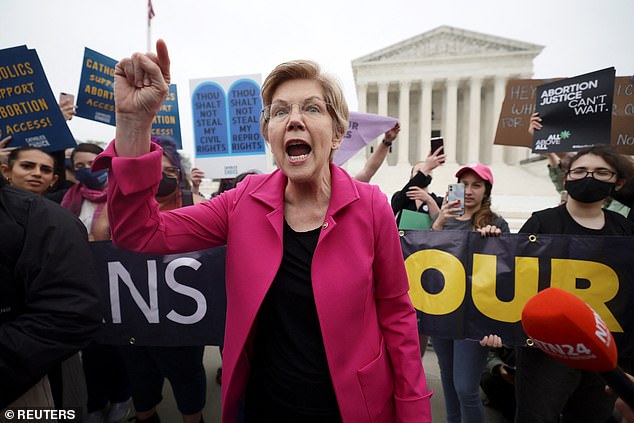 In a fundraising email for the far-left Working Families Party (WFP), Warren accused Cuellar of siding with ‘anti-choice extremists’ and ‘obstructionist Republicans’ when the Lone Star state passed a law banning most abortions after six weeks and urged Texans to give at least $3 toward his opponent. Half the donation would go to WFP.

Cuellar, a fixture of Laredo politics for decades, is running to keep his seat in Texas’ 28th Congressional District against a challenge from attorney Jennifer Cisneros.

The moderate lawmaker’s race has underscored the growing divide between the centrist and progressive wings of the Democratic party. While he’s backed by House Speaker Nancy Pelosi, Cisneros has clinched endorsements from ‘Squad’ member Rep. Alexandria Ocasio-Cortez.

In the WFP’s email Warren called Cisneros ‘a terrific progressive candidate who has a real chance to beat him and will fight tooth and nail for reproductive rights if elected to Congress.’

‘Here’s the deal: There’s about to be a runoff election down in Texas for a congressional seat held by Henry Cuellar, who sided with anti-choice extremists when the Texas abortion ban was passed and voted against the Women’s Health Protection Act to codify Roe v. Wade,’ Warren said in the fundraising email.

Cuellar is the only House Democrat to vote against Congress’ bid to pass federal abortion protections.

Elizabeth Warren (pictured at a protest outside the Supreme Court over a leaked draft opinion suggesting the body could overturn Roe v. Wade last week) is the latest progressive Democrat to campaign against longtime Rep. Henry Cuellar of Laredo, Texas

‘The people of Texas’ 28th Congressional District are ready for big, structural change and deserve a working families champion that will be on the side of working people; not the side of big money, anti-choice, and obstructionist Republicans. Jessica is that champion,’ Warren stated.

If more progressives like Cisneros are elected, Warren promised, Congress could succeed in passing abortion protections even without Roe v. Wade in place – and scuttle the Senate’s filibuster to do it with just a simple majority rather than needing 60 votes.

The veteran lawmaker and moderate Democrat is facing his toughest re-election battle in years, heading to a runoff race on May 24 after only coming out ahead of his challenger by 949 votes in March

‘With stronger, pro-choice, working families majorities in the House and Senate and President Joe Biden in the White House, we can end the filibuster and pass a national law ensuring abortion rights,’ the senator said.

Later on Monday, Warren and Cisneros will appear side-by-side for a WFP call with supporters about the Supreme Court potentially overturning Roe v. Wade.

Cuellar for his part released a statement early last week condemning the Supreme Court’s conservative majority for positioning to overturn the landmark 1973 case. However, he also reiterated his stance that abortion should only have exceptions for ‘rape, incest, and danger to the life of the mother.’

Voters in Texas’ 28th district will cast their ballots on May 24 in a runoff race after no candidate secured a 50 percent majority in the primary earlier this year. The district runs partially along the US-Mexico border.

Cisneros unsuccessfully challenged Cuellar for his seat in 2020, losing by just under 3,000 votes. Nearly 75,000 ballots were cast in total.

The progressive lawyer for the first time expressed criticism over Pelosi backing Cuellar after the bombshell Supreme Court leak.

It’s the second time progressive attorney Jennifer Cisneros (left) is running against Cuellar, having lost by less than 3,000 votes in the 2020 Democratic primary

‘I am calling on Democratic Party leadership to withdraw their support of Henry Cuellar who is the last anti-choice Democrat in the House,’ Cisneros said last week. ‘With the House majority on the line, he could very much be the deciding vote on the future of our reproductive rights and we cannot afford to take that risk.’

Pelosi’s endorsement of Cuellar appears to conflict with her sentiments in a letter to House colleagues on Monday accusing Republicans of trying to ‘punish and control women for exercising their constitutional rights’ and touting Democrats’ passage of the abortion law that Cuellar opposed last year.

But the current fight over abortion rights is not the first speed bump Cuellar’s faced in this race.

The FBI raided the veteran lawmaker’s home in January as part of a federal probe into a group of US businessmen linked to the country of Azerbaijan, according to NBC.

Cuellar said at the time that he is cooperating with authorities but denied any wrongdoing in the ongoing matter.

In addition to backing Cisneros, the WFP released a statement in late March endorsing every member of the House’s ‘Squad’ including Ocasio-Cortez and Reps. Ayanna Pressley, Ilhan Omar, Rashida Tlaib, Cori Bush, and Jamaal Bowman.

‘Our progressive coalition in Congress is growing, and so is our power. When we re-elect the Squad and elect more progressives to join them, we’ll achieve the real working families majority we know is possible,’ the left-wing minor political party said.

WFP made national headlines earlier this year when it organized Tlaib’s progressive response to President Joe Biden’s State of the Union, in addition to the traditional minority party’s response – in this case Republicans’.