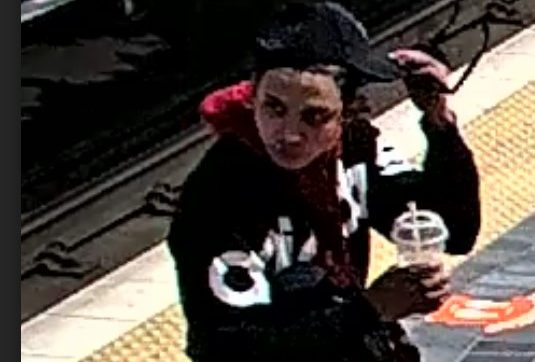 Edmonton police are trying to identify a man after they said an elderly woman was pushed from the Jubilee LRT platform onto the tracks on Monday.

Police say the two people don’t know each other and called the case “a violent, unprovoked assault on a senior.”

It happened at about 8:20 p.m. on April 25. The woman was standing on the LRT platform at 83 Avenue and 114 Street waiting for a train when the man “unexpectedly ran up and pushed the female off the platform onto the LRT tracks,” EPS said.

The woman suffered serious but non-life-threatening injuries and was taken to hospital by EMS.

Police have released photos of the suspect in hopes in finding the man. They believe he’s about 20 years old and at the time of the incident was wearing a red hoodie, red sweatpants, a black Adidas jacket, a black baseball hat, black and white Nike high-top running shoes and a black backpack.

Anyone who recognizes this man or has information about the attack is asked to contact the EPS at 780-423-4567 or #377 from a mobile phone. Anonymous information can also be submitted to Crime Stoppers at 1-800-222-8477 or online.

2:00
Renewed calls for safety after random stabbing on LRT platform