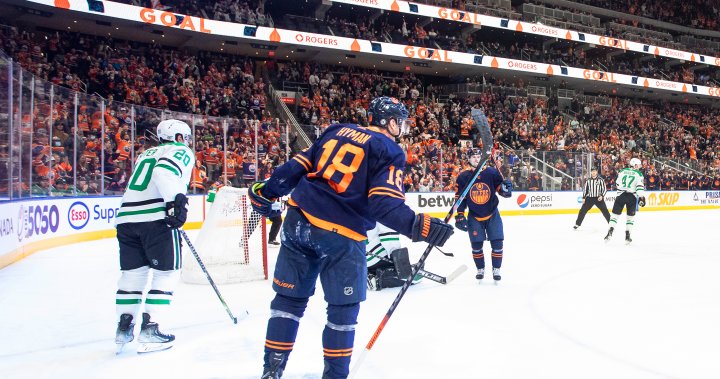 The Edmonton Oilers have won again at Rogers Place, posting a 5-2 win over the Dallas Stars Wednesday night.

The Oilers came out flying and scored twice in the first seven minutes. Evander Kane converted a pass from Connor McDavid for his 17th goal of the season.

Oilers forward Derek Ryan swiped in the rebound after Ryan McLeod hit the crossbar to make it 2-0.

Five minutes into the second, Stars forward Roope Hintz found a loose puck in the crease and tapped it in to tie it at two.

Zach Hyman restored Edmonton’s lead when he swept a rebound past Dallas goaltender Scott Wedgewood for his 25th.

Edmonton defenceman Darnell Nurse fired up the crowd in the third when he bodychecked Jamie Benn right into the Oilers’ bench.

McDavid sealed with the win with an empty-netter on the Oilers’ 50th shot of the game.