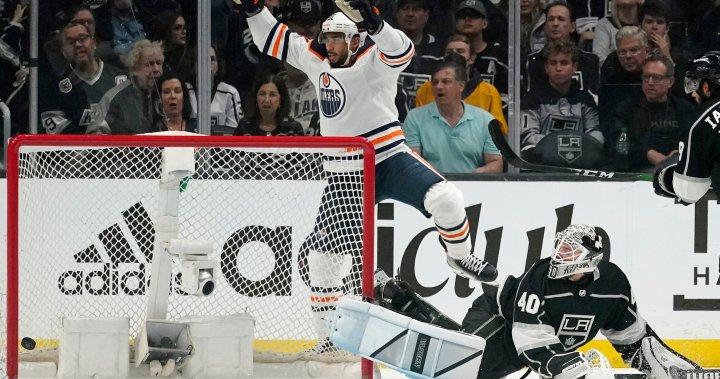 Mike Smith made 44 saves and Evander Kane racked up his first playoff hat trick as the Edmonton Oilers pounded the L.A. Kings 8-2 on Friday night.

The Oilers jumped ahead with two goals in the first 6:07 of the game.

While playing four-on-four, Connor McDavid fed Leon Draisailt on a two-on-one for Draisaitl’s third of the series. McDavid played set-up man again on the power play with Zach Hyman tapping in a goal mouth pass.

Mike Smith made 19 saves in the first, including a denial of Anze Kopitar from the slot on a Los Angeles power play.

In the second period, Cody Ceci held in a clearing attempt. His shot was stopped by Jonathan Quick, but Kane was on the spot to tap in the rebound for a 3-0 lead.

Hyman fired in a wrister to chase Quick from the crease, having allowed four goals on 17 shots.

Evander Kane has recorded multiple goals in each of the past two games and became the first @EdmontonOilers player to do so in the #StanleyCup Playoffs since Bernie Nicholls in 1992 (2 GP).#NHLStats: https://t.co/YvCW13KHJC pic.twitter.com/m6mCMy8ozu

Kane beat the new keeper Cal Petersen to give the Oilers three goals in just over three minutes in the second period.

Anze Kopitar got the Kings on the board 16 seconds later, ending Smith’s shutout run at 95:21. Phillip Danault added a power play goal late in the second to cut the Oilers lead to 5-2.

Cody Ceci had assists on all three of Kane’s goals.