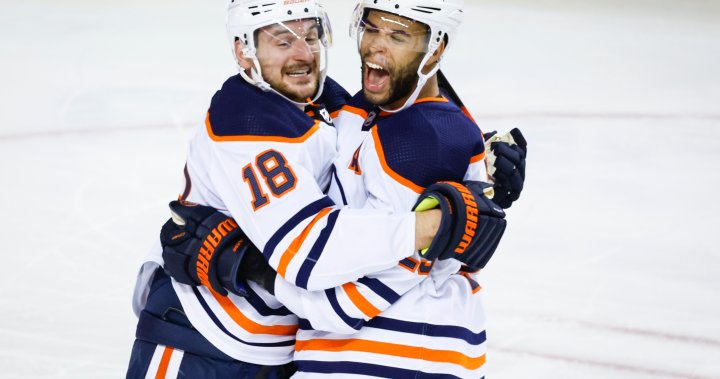 Connor McDavid scored 5:03 into overtime to give the Edmonton Oilers a 5-4 win over the Calgary Flames Thursday night.

The Oilers win the series 4-1 and will play in the Western Conference Final for the first time since 2006.

The Flames took the lead halfway through the first when Andrew Mangiapane converted a pass from Blake Coleman.

Mikael Backlund made it 2-0 with a deflection in the second period.

The Oilers came back with two goals in 2:16. Darnell Nurse ripped home a shot from the high slot, then Jesse Puljujarvi tucked in a loose puck after a shot from Zach Hyman.

Late in the second, the teams set a new NHL playoff record by combining for four goals in 1:11. Hyman rapped in a power play goal to give the Oilers the lead. Johnny Gaudreau and Calle Jarnkrok tallied for Calgary. Evan Bouchard pounded in a point shot off a pass from Leon Draisaitl, his third assist of the period. It was 4-4 after two.

The Flames thought they took the lead with 5:57 left in the third. Backlund’s shot went through Smith and was headed over the line. Blake Coleman drove the net and had the puck go in off his skate. After video review, the officials ruled Coleman propelled the puck in with his skate. The goal was taken off the board.

In overtime, Draisaitl slid the puck to McDavid, who stepped into the slot and fired a shot past Jacob Markstrom’s glove.

Draisaitl had four assists and finished the series with 17 points.

The Oilers will take on either Colorado or St. Louis in the next round.