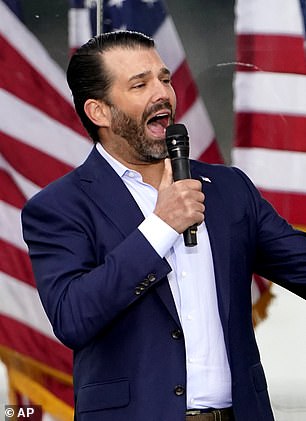 Donald Trump Jr. is expected to speak with the House committee investigating the Capitol riot ‘in the coming days,’ according to Thursday’s report

Donald Trump‘s eldest child is set to meet with the House committee investigating the Capitol riot ‘in the coming days,’ it was reported Thursday, after his girlfriend Kimberly Guilfoyle came to Capitol Hill for her own marathon testimony.

Donald Trump Jr. is the latest member of the former president’s orbit to be summoned before the House Select Committee Investigating the January 6th Attack on the U.S. Capitol, sources told CNN.

Guilfoyle spoke with lawmakers on the Democrat-led panel for more than nine hours on Monday, NBC reported, after she met with them for a closed-door deposition in February.

The earlier meeting went off the rails when the former Fox News host-turned-Trump 2020 surrogate’s lawyer reportedly accused committee members of breaking previously agreed-upon conditions to only have the panel’s lawyers asking questions.

Her fiancé, Trump Jr., is going to speak with the committee voluntarily after he was invited to do so, Thursday’s report claims.

He was not subpoenaed by the panel.

Guilfoyle was subpoenaed in early March. Committee Chair Rep. Bennie Thompson (D-Miss.) said she ‘met with Donald Trump inside the White House, spoke at the rally that took place before the riot on January 6th, and apparently played a key role organizing and raising funds for that event.’

The former first son’s younger sister, Ivanka Trump, also appeared before the committee as part of their ever-widening probe into what led to Trump’s supporters storming the Capitol complex in a bid to stop Congress from certifying the 2020 election.

His fiancée Kimberly Guilfoyle, a former Fox News host who became a Trump 2020 campaign official, appeared before the panel on Monday

Ivanka was grilled for an entire day — eight hours — and reportedly did not invoke the Fifth Amendment nor any privilege claims to avoid answering.

Asked if she was cooperating, Thompson said: ‘Well she came in on her own, that has obviously significant value. We did not have to subpoena.’

Her husband Jared Kushner spoke with the panel as well. A lawmaker on the committee described his testimony as ‘helpful.’

Ivanka and Kushner were both senior White House advisers in the Trump administration.

Trump Jr.’s testimony is expected to come on the heels of a CNN report that revealed he sent a text to his father’s ex-White House Chief of Staff outlining ways to overturn President Joe Biden’s 2020 victory.

‘This is what we need to do please read it and please get it to everyone that needs to see it because I’m not sure we’re doing it,’ the Trump Organization executive reportedly said on November 5, two days after Americans cast their ballots for president.

The committee has gotten testimony from multiple members of Trump’s inner circle, including former advisers and even relatives

The committee is expected to begin public hearings later this spring, it was previously reported

He reportedly explained the outline with by saying it’s ‘very simple’ and ‘We have multiple paths We control them all.’

The strategy Trump Jr. outlined involved filing lawsuits and demanding recounts in certain swing states in a bid to keep them from certifying their election results. He also called for GOP-led legislatures to send an alternate slate of ‘electors’ that would in theory allow the real votes to be tossed out.

Otherwise, he reportedly told Meadows, the Republican members of Congress could vote to keep Trump for another four years themselves.

The ‘electors’ plan is similar to one pushed by pro-Trump lawyer John Eastman, who notoriously authored memos outlining how he claimed then-Vice President Mike Pence could have unilaterally overturned the 2020 results, which Pence refused to go along with.

Eastman is currently engaged in a legal battle with the committee while trying to shield a tranche of correspondences and other documents they’re seeking.

A US District Judge ordered him to personally review 90,000 documents he initially wanted to keep hidden, ruling Eastman’s privilege claim over the vast number to be over-broad.