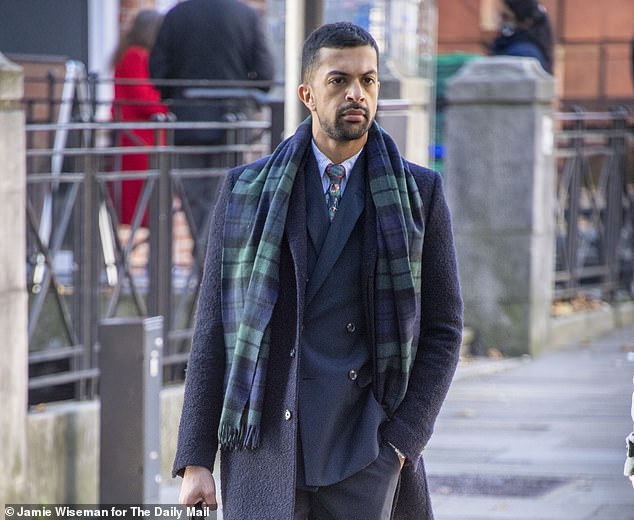 Doctor infected his partner after lying about HIV test result and ‘took a risk’ by having unprotected sex while knowing he had the virus, court hears

By Connor Stringer For The Daily Mail

A doctor who cheated on his partner before recklessly infecting him with HIV lied about a sexual disease test to hide his condition, a jury heard yesterday.

Manroop Bains, 38, is accused of deceiving his lover into having unprotected sex – infecting him with the deadly disease for life.

The junior doctor, who had hopes of specialising in sexually transmitted diseases, allegedly ‘took a risk’ and had sex with his boyfriend knowing he was positive for the virus.

He was caught when his partner, who he met on the app Grindr, found letters from the NHS declaring his infection which were dated months before their relationship began, London’s Southwark Crown Court was told yesterday.

Manroop Bains, 38, is accused of deceiving his lover into having unprotected sex – infecting him with the deadly disease for life

Giving evidence against Bains, from London, the victim broke down in tears recalling the ‘terrifying’ moment he tested positive just days after experiencing symptoms of the disease in June 2015.

He told the court: ‘I was at Manroop’s house and within a very short period I became very sick. Sweating, freezing and the worst sore throat I’ve ever had. I also had a rash on my chest.

‘We had a conversation that he was negative and I trusted him because I loved him and he was a doctor. I followed his advice and the following day, I went to the doctor.

‘He checked my blood pressure, checked my ears and throat. My GP believed I had influenza and he signed me off for a week.

‘I went to the clinic immediately after and had a full sexual health screen, a week after the previous one. I was told I was HIV positive.’

The jury heard how the pair’s relationship began in the summer of 2014 after connecting on the popular LGBT+ dating app, meeting up for ‘sex and a glass of wine’.

Michael Holland QC, prosecuting, told the court: ‘They had got together as an item in February 2015. At this time each had declared that they were HIV negative – hence unprotected sex seemed not to be an issue.

‘In fact, that was not true of Manroop Bains. He had become HIV positive in 2014. And he knew that. Why? Because as a junior doctor he was required to be screened.’

Not long after the pair had moved in together, the victim claimed he found ‘ten plus’ photos of Bains having sex without a condom during a trip to Brighton.