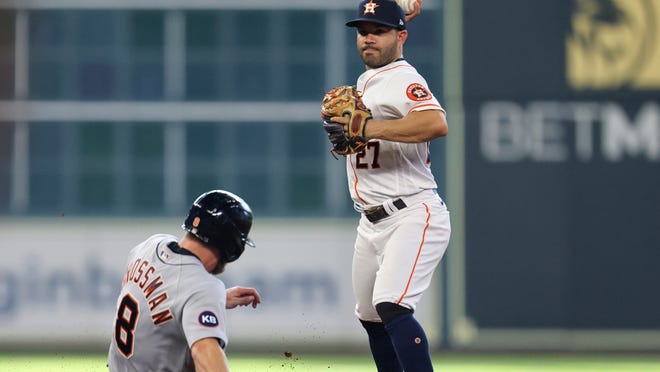 HOUSTON — Once again, the Detroit Tigers were on the losing end of a baseball game.

It wasn’t even close.

A grand slam from Aledmys Díaz with two outs in the third was more than enough for the Houston Astros, as the Tigers lost Sunday’s series finale, 5-0, swept in four games at Minute Maid Park.

The Tigers (8-19) tallied one hit, three walks and 10 strikeouts on Mother’s Day and dropped their 12th game in 14 tries. Detroit has the worst record in the American League.

SHAWN WINDSOR:Here’s what is most painful about Detroit Tigers’ AL-worst start

In the Tigers’ bullpen-only game, right-hander Drew Hutchison replaced righty Wily Peralta in the third inning and loaded the bases with one out. Jose Altuve singled to leadoff the frame before Alex Bregman and Yordan Alvarez recorded one-out walks.

Hutchison struck out Kyle Tucker with a sixth-pitch slider for the second out.

Any momentum from Tucker’s strikeout was chewed up by the Astros shortly thereafter, as Diaz hit Hutchison’s second-pitch, 92.4 mph four-seam fastball into the seats in short left-center.

The grand slam put the Astros ahead 4-0.

Four Tigers reached safely: Jonathan Schoop in the second inning, Robbie Grossman in the fourth, Miguel Cabrera in the fourth and Javier Báez in the sixth. The lone hit came from Schoop, who doubled to right to snap an 0-for-17 stretch.

The best scoring opportunity came in the fourth, when a wild pitch from Astros right-hander Jake Odorizzi advanced Grossman and Cabrera into scoring position. But the next two batters — Jeimer Candelario and Schoop — were retired.

The Tigers finished 0-for-3 with runners in scoring position.

Righty Héctor Neris slammed the door on the Tigers in the ninth.

HOMECOMING:Tigers manager A.J. Hinch ‘super happy’ to be in Houston

He gave his team two scoreless innings on one hit and three walks with three strikeouts. Three of his walks came in the first, but he avoided damage with a 6-4-3 double play and a strikeout.

The 33-year-old — pitching on his birthday — struck out Tucker on a fourth-pitch 96.7 mph fastball for the third out. He allowed a leadoff single in the second but retired the next three batters in order: ex-Tiger Niko Goodrum (strikeout), Jason Castro (strikeout) and Jose Siri (pop out).

After Peralta, Hutchison entered and gave up the grand slam to Diaz in the third inning. The 31-year-old completed a perfect fourth, including two strikeouts. Across two innings, he allowed four runs on two hits and two walks with four strikeouts.

In the fifth, Bregman launched a solo home run off right-hander Joe Jimenez for a 5-0 Astros lead. Jimenez finished the sixth with two strikeouts, then the Tigers turned to right-hander Will Vest.