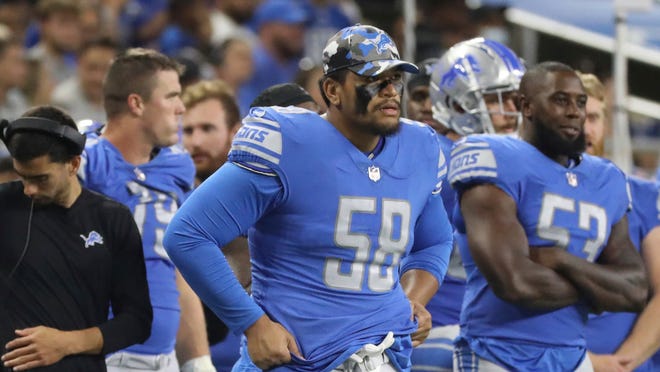 No matter the position, it’s rarely ever an “easy” transition from college to the NFL.

Still, there are some spots proven to be tougher than others when it comes to making that leap; near the top of that list, tight end.

“I think it’s the type of athletes you’re going against, I’d say most tight ends lack length relative to the guys they’re blocking,” Detroit Lions coach and former tight end Dan Campbell said. “A lot of times most of these defensive ends now are 280 pounds and have 35- or 36-inch arms. If you’re lucky you’ll have 34-inch arms, most have 32-inch arms.

“So you don’t have the size, the length and if you’re not perfect in your technique to get into them and you’re going to struggle and it will be hard to get moving. So it takes a ton of fundamental work.”

Meaning, it’s nice to have veterans in that group.

A quick look at the Lions roster shows there isn’t a lot of experience at the position and even those who are the tenured players, haven’t been full time participants in camp.

Detroit opened fall with nine tight ends on its roster. Monday, the team released Nolan Givan and waived Garrett Griffin trimming the roster to 85 players (required by the league) by Tuesday.

The leader in the room is of course former first-round pick T.J. Hockenson.

The Iowa standout was on track for the best year of his career in 2021 — catching 61 passes for 583 yards and four touchdowns in 12 games — before he broke his thumb and missed the final five weeks of the season.

Hockenson didn’t participate in the team’s preseason opener against the Atlanta Falcons on Friday, but the understanding is if it were the regular season, he’d be on the field.

After that, experience gets thin quickly.

Brock Wright played in 10 games and caught 12 passes for 117 yards and two scores as a rookie in 2021. Shane Zylstra caught three passes for seven yards.

Nobody else has a reception as a tight end in the NFL.

“We are a pretty young room,” Wright said. “Last year we were young too, we had Darren Fells for a little bit and he was the older guy so I tried to pick up as much as I can from those guys.

“It’s all about growing that football IQ and knowledge from everyone you can.”

Rookie fifth-round pick James Mitchell from Virginia Tech is also on the list of in the room but not fully available.

The good news, is Monday was his most active day to date in practice.

With the team in shells (not full pads), Mitchell took reps with both the first and second team, but he’s yet to be a full participant in any padded practice as he rehabs from a torn ACL last season.

“He gets post practice drills, maybe some pass sets or combinations…we’re continuing to work him in,” said tight ends coach Tanner Engstrand. “Every rep he can get is valuable because he didn’t play this spring and he missed all those reps and the only way to get better at football is by playing football.”

To bolster the depth, the Lions are trying out recently signed Devin Funchess, who they are transitioning from receiver to tight end for the first time in his career.

There’s also Jason Cabinda — who despite still being listed as a fullback on the roster works with the tight ends as an “F,” essentially an H-back hybrid who can lineup on the line or in the backfield.

However not only is he in his first year full time at the position, but is still dealing with ankle injury, making him question mark for Week 1.

“Tough to say (when he’ll be back), it’s going a little longer than we anticipated,” Campbell said. “I think it’s highly unlikely we see him (in that final preseason game) at Pittsburgh. So what is that window?”

For now, Wright has received the majority of Hockenson’s reps, serving as a second tight end and received praise for his improved blocking, both in the rushing attack and pass protection.

“I’d say in spring we were actually hoping for a little more of a jump; he did a good job, but man when we got him in camp and the pads come on, he’s really growing,” Campbell said of Wright. “I swear that guy when you need a play in the pass game, he’s just where he needs to be, he shows up and makes the play. it might not always be the cleanest catch but he catches and he makes it.

“My vision for a Y tight end is him, that type of player who can mix it up, do the dirty work…when you need it, he’s got to play big boy ball and so I like where he’s going.”

One reason he believes he’s been able to continue to grow in the offense, is his familiarity with offensive coordinator Ben Johnson, his position coach a season ago.

Campbell, by nature, has particular knowledge of the position and Engstrand is also the passing game coordinator of the offense, so the position group is well insulated by staff.

Wright said Monday his biggest improvement has been in the fundamentals of the position, especially his leap in blocking which has grown as he’s learned to use his hands.

Then there’s that natural leap Campbell talks about from Year 1 to Year 2, which Wright is already feeling.

“When you come in as a rookie you have all these nerves, it’s your first time doing a lot of things, he said. “But this year I’ve been through it.

“Out there on the field the other night just so much more comfortable, so much more self-aware and I think that helps you out when it comes to play speed.