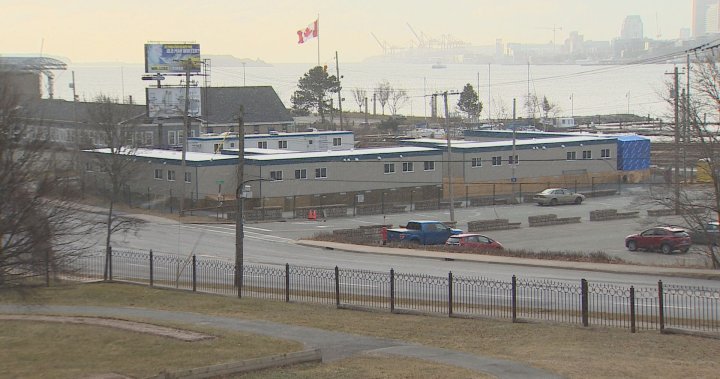 With a pending storm brewing that’s slated to hit the Maritimes this weekend, modular units for unhoused people that were originally set to open in Dartmouth more than two weeks ago still aren’t ready.

Previous estimates from the Halifax Regional Municipality pegged installation to be finished Dec. 20, 2021, but work was still ongoing Tuesday.

A written update provided by the HRM Dec. 17 says they could now be ready for occupancy, pending provincial supports, by “the first week of January.”

The Dartmouth units, which are expected to accommodate 26 people, are located on Alderney Drive.

An HRM spokesperson told Global News Wednesday that “an update is expected this week.”

Meanwhile, the Centennial Pool parking lot in Halifax will house 38 people — down from 44 — when nine units are installed there.

“The timeline for the installation of the modular units will become clearer as we complete the Dartmouth site,” the HRM said in December.

P.A.D.S Community Network, a group that advocates for safe and accessible housing, is calling for more advanced notice about warming centres and emergency shelter accommodations — especially with this week’s looming storm.

“But decisions about when to offer these options is made behind closed doors, at the last minute and without measures in place to assure that those experiencing homelessness are provided with the necessary information about when these spaces are open and how they might get to these places in order to actually access them.”

Some front-line agencies do plan to open a warming centre in the city’s downtown.

Brynn Langille, the HRM spokesperson, says storm preparations are in the works.

“We will have more details on that in the coming days,” she says.

HRM says the Gray Arena in Dartmouth remains open to people, and they “will not be asked to vacate until alternate accommodations have been offered.”