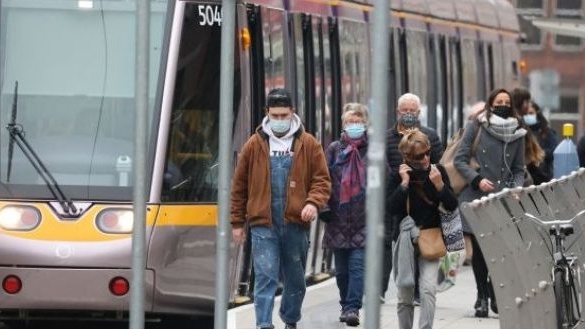 A “cultural change” is needed in Irish society where it is considered “impolite” to go to work or school with symptoms that could be Covid-19, the Irish College of General Practitioners has said.

Dr Nuala O’Connor, the group’s lead on Covid-19, said it was important to protect the vulnerable in society and that anyone experiencing symptoms should stay at home and wear a mask if they did need to go out.

She told RTÉ radio’s Morning Ireland there were indications that the current wave of the BA.2 variant had peaked. Tánaiste Leo Varadkar last night told RTÉ’s Prime Time it was chief medical officer Dr Tony Holohan’s view that “we are close to or past” the peak of the second Omicron wave.

“The numbers in hospital are stabilising. Two thirds of people in ICU are not there because of Covid, they just happen to have Covid,” he said.

The Fine Gael leader said it was anticipated that the number of people in hospital with the disease would start falling.

The number of people in hospital with the disease fell by 63 on Friday morning to 1,472. A further 11,741 Covid-19 infections were reported yesterday.

The mooted change to the isolation period is due to be considered at a Cabinet Covid-19 sub committee meeting later on Friday.

When asked about possibly reducing the number of isolation days to seven, Dr O’Connor said there was evidence about fewer days of isolation being sufficient and such a change had already been introduced in other jurisdictions.

She said she did not think there would be any announcement about this happening in the State in the near future.

She said the focus should remain on staying at home if experiencing symptoms and getting booster vaccines.

Ireland had a good record on vaccination, but only 75 per cent of the population had received a booster and 50 per cent of seriously ill patients in ICU had not been vaccinated, she added.

Any respiratory illness such as flu is an inconvenience and did not carry the risk of serious illness, hospitalisation or death, but there are always vulnerable people in the community who did not have the same level of protection.

“As a society we need to protect these people” she said. “Moving forward it is important to have a culture change.”

Taoiseach Micheál Martin yesterday drew sharp criticism for dismissing calls for a return to mandatory mask-wearing to try to slow the latest wave.

He rejected a joint call from the Irish Nurses and Midwives Organisation (INMO) and the Irish Association of Emergency Medicine for Government action to curb the spread of the virus in hospitals to help staff exhausted from dealing with multiple waves of the disease.

Mr Martin said the public health view was that the BA.2 Omicron variant, while not as virulent as past strains, was so transmissible it was “almost impossible” to stop transmission.