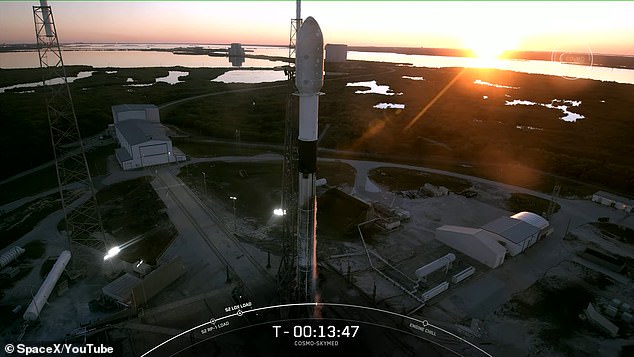 A planned SpaceX Falcon 9 rocket launch from Cape Canaveral was abandoned on Sunday night with just seconds to go before liftoff.

The plug was pulled with mission control’s launch director calling out ‘Hold! hold! hold!’ over the radio after a cruise ship sailed into the ‘hazard area’ off the Florida coast with less than 35 seconds to run on the countdown clock.

Elon Musk-owned SpaceX said the rocket and payload were all good to go, but the Coast Guard could not keep the cruise ship out of the no-go zone, forcing the launch to be aborted.

Coastguard informed mission control that a cruise ship, the Harmony of the Seas was in the hazard area, seen on the bottom right of the map

On a livestream of the event, SpaceX commentator Jesse Anderson explained how a cruise ship was approaching the no-go zone, and that the U.S. Coast Guard was in contact with the ship.

The rocket was supposed to be sending radar surveillance satellites from the Italian Space Agency into orbit. The launch was rescheduled to take place on Monday evening.

Three previous attempts were delayed due to poor weather, preventing the Falcon 9 from blasting off on Thursday, Friday and Saturday.

There were two ships to blame that could have been the potential reason for cancellations of the launch: Royal Caribbean’s Harmony of the Seas was off the coast of Brevard County after having departed Port Canaveral Sunday afternoon while the MSC Meraviglia was still in the port channel close by.

The rocket was supposed to be sending radar surveillance satellites from the Italian Space Agency into orbit. The plan is for the launch to take place on Monday evening instead

The cruise ship, Harmony of the Seas, part of the Royal Caribbean International fleet, is seen moored at a quay in the port of Miami, Florida

The U.S. Space Force has attempted to get the word out about the multiple southerly trajectory rocket launches from the Space Coast in January which meant a larger hazard area for both cruise ships and aircraft.

‘The chance of a launch scrubbing due to a range violation is increased if the public is not aware of the expanded safety measures,’ read a press release from the Space Force group that oversees both Cape Canaveral and Patrick Space Force Base in Brevard County,

‘Boaters and aircraft operators are directed to consult the advisories for each launch that contain detailed maps, coordinates, timing, and status of the area restrictions and closures. Last year, a polar launch attempt scrubbed due to a range violation when a private aircraft strayed into the restricted airspace prior to launch.’

A SpaceX Falcon 9 rocket stands ready for launch at pad 40 at Cape Canaveral Space Force Station in Cape Canaveral. The  launch has been rescheduled for Monday evening

SpaceX is currently on target to launch a rocket a week throughout 2022, including delivering hundreds of Starlink satellites into low Earth orbit.

It would be a remarkable achievement for the space firm, building on 31 launches last year – carrying a combination of private and government payloads.

‘That’s an incredible pace,’ said Sandra Magnus, astronaut and former executive director of the American Institute of Aeronautics and Astronautics.

Next-generation Starlink constellations could have as many as 42,000 Starlink satellites in low-Earth orbit, says Elon Musk (pictured)

Speaking during a virtual meeting of NASA‘s Aerospace Safety Advisory Panel (ASAP), Magnus said SpaceX would need to ensure appropriate attention is paid to NASA missions, with the right resources made available.

SpaceX has launched three Falcon 9 rockets so far this year, with the first on January 6.

That was still a record number of launched for the firm, and put them on a similar pace as the Chinese space agency.

It isn’t clear whether the 52 scheduled launches are all using the Falcon 9, or whether there would be Falcon Heavy and even Starship prototype launches.

The firm is expected to launch the first orbital prototype of its Starship rocket into orbit by the spring.

Elon Musk-owned SpaceX is on target to launch a rocket a week throughout 2022, including delivering hundreds of Starlink satellites into low Earth orbit

Being able to re-use parts of rockets has been listed as a key reason why SpaceX has been able to launch so often, landing boosters, recovering nosecones and re-using them in future launches.

This reduces the cost of each mission from a typical $60 to $90 million down to about $30 million per trip.

The Transporter-3 mission earlier this month, that saw a Falcon 9 carry satellites for a number of smaller operators, reused a booster for the 10th time in 20 months.

SpaceX’s rideshare program allows corporations and governments to send a 200-kilogram payload into orbit for the relatively cheap price of $1 million – compared to a solo mission for a $50 million.

Of the 52 missions scheduled for 2022, there will be multiple crewed spaceflights for NASA, and the Axiom Space AX-1 mission, that will take the first fully civilian crew to the International Space Station in February.

It would be a remarkable achievement for the space firm, building on 31 launches in 2021 carrying a combination of private and government payloads

‘Both NASA and SpaceX will have to ensure the appropriate attention and priority are focused on NASA missions, and the right resources are brought to bear to maintain that pace at a safe measure,’ Magnus said during the meeting.

Other NASA launches include cargo shipments to the ISS, but the firm has a number of non-NASA customers, including launches for its own Starlink internet satellites.

This massive internet satellite constellation could one day be made up of tens of thousands of spaceships, orbiting a few hundred miles above the Earth and working in concert to provide high-speed internet to the most rural parts of the planet.

There is no guarantee SpaceX will hit its ‘one per week’ target, as launches are subject to weather, faults and sudden change, but it is currently on target.

In this image taken with a slow shutter speed, a SpaceX Falcon 9 rocket from Launch Pad 39A at Kennedy Space Center, arcs across the night sky in this view Viera, Florida, January 18, 2022

Elon Musk’s SpaceX has launched more than 2,000 of its ‘Starlink’ space internet satellites into orbit.

The constellation, known as Starlink, is under development at SpaceX’s facilities in Redmond, Washington.

Its goal is to beam superfast internet into your home from space.

While satellite internet has been around for a while, it has suffered from high latency and unreliable connections.

Starlink is different. SpaceX says putting a ‘constellation’ of satellites in low earth orbit would provide high-speed, cable-like internet all over the world.

The billionaire’s company wants to create the global system to help it generate more cash.

Musk has previously said the venture could give three billion people who currently do not have access to the internet a cheap way of getting online.

It could also help fund a future city on Mars.

Helping humanity reach the red planet is one of Musk’s long-stated aims and was what inspired him to start SpaceX.

The company has previously filed plans with the Federal Communications Commission (FCC) to launch 4,425 satellites into orbit above the Earth — three times as many that are currently in operation.

‘Once fully deployed, the SpaceX system will pass over virtually all parts of the Earth’s surface and therefore, in principle, have the ability to provide ubiquitous global service,’ the firm said.

‘Every point on the Earth’s surface will see, at all times, a SpaceX satellite.’

The network will provide internet access to the US and the rest of the world, it added.

It is expected to take more than five years and $9.8 billion (£7.1bn) of investment, although satellite internet has proved an expensive market in the past and analysts expect the final bill will be higher.

Musk compared the project to ‘rebuilding the internet in space’, as it would reduce reliance on the existing network of undersea fibre-optic cables which criss-cross the planet.

In the US, the FCC welcomed the scheme as a way to provide internet connections to more people.