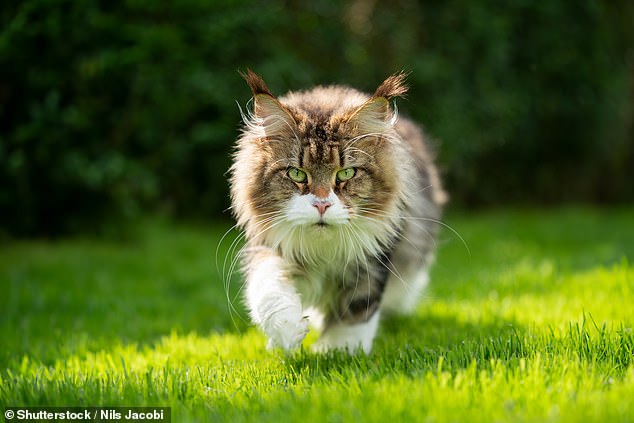 Cruelty alert over declawed cats as Brits imported almost 600,000 felines from overseas last year, including many subjected to the illegal process

By Valerie Elliot For The Mail On Sunday

Britons imported almost 600,000 cats from overseas last year, including many subjected to the illegal process of declawing.

Experts are alarmed by a burgeoning trade in kitten smuggling fuelled by the growing popularity of pedigree breeds costing up to £2,000, such as Scottish Fold, furless Sphinx, Bengal and Maine Coons.

Just two per cent of the UK feline population were born abroad in 2020, but that has now risen to six per cent.

Experts are alarmed by a burgeoning trade in kitten smuggling fuelled by the growing popularity of pedigree breeds costing up to £2,000, such as Maine Coons (file pic)

Of the 590,000 cats imported last year from countries such as Bulgaria, Hungary, Latvia and Lithuania, the veterinary charity PDSA believes 31,000 were declawed, a practice banned in Britain, but being driven by a trend for more ‘house cats’.

A decade ago, 15 per cent of cats were kept indoors, but that has risen to 28 per cent.

Senior PDSA vet Dr Sean Wensley said: ‘We are concerned about the welfare of imported cats and the increased risk of spreading new diseases in this country.’

Declawing has been compared to cutting off someone’s toes or fingers. Side effects include loss of balance, back ache and stress.

The charities Cats Protection and RSPCA have joined forces to demand tougher pet travel rules to prevent exploitation of cats by unscrupulous traders.

They want cats to be at least six months old before they can enter Britain – up from 15 weeks – and a ban on pregnant and declawed animals.

Declawing has been compared to cutting off someone’s toes or fingers, with side effects including loss of balance, back ache and stress. Pictured: A cat’s claws are trimmed (file photo)

Madison Rogers, acting head of advocacy at Cats Protection, said: ‘It is clear there is a growth in cat imports and we need tougher measures before the trade gets out of control.’

The Government has previously resisted a ban on declawed cats, but a consultation is now underway.

A Defra spokesman said: ‘The Government takes animal welfare very seriously and we operate one of the most robust pet travel check regimes in Europe.’