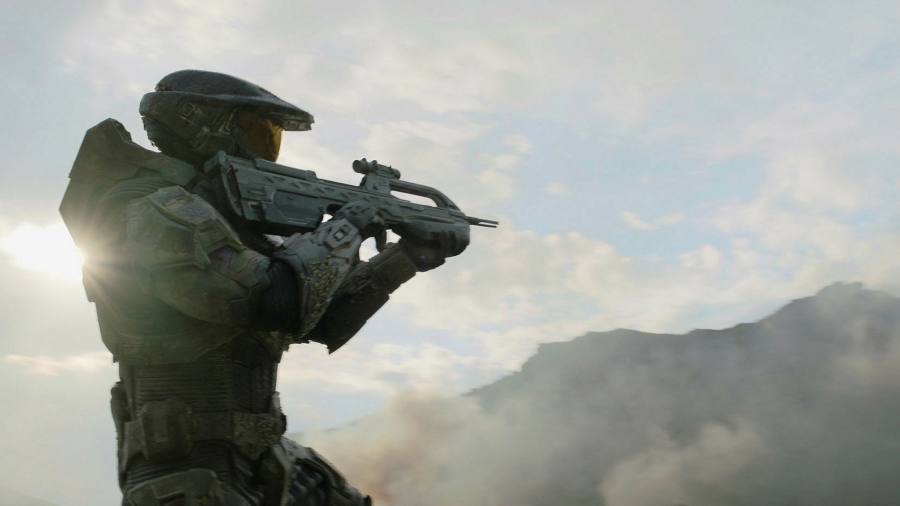 Longtime Halo protagonist Master Chief is a charmless hero. This is a character defined by limitless reserves of strength and gruffness, whose moniker is two tough-sounding titles grafted together (eventually he is given a real human name, which is — wait for it — John). Players have never even seen his face: the amber visor of his helmet stays resolutely closed.

Given that Halo is a game about blasting aliens with laser guns, this has never been a problem. Chief’s blankness allows players to project themselves more easily into his reinforced boots. Yet it was a hurdle for the new Halo TV adaptation on Paramount Plus. Games can have interesting characters and plots, but they don’t necessarily depend on them. Not so with television. Paramount, under the guidance of executive producer Steven Spielberg, needed to make changes.

First, they decided Chief had to show his face — a gormless Pablo Schreiber, much beefed-up from his days as “Pornstache” in the Netflix prison comedy-drama Orange is the New Black. Then they crunched 16 games’ worth of sci-fi pabulum into a semi-coherent narrative that pits humans against aliens and involves much wooden dialogue.

To the writing team’s credit, they do inject some moral ambiguity into the world by picking at threads only glancingly mentioned in the games (such as Master Chief’s origins as a child soldier, biologically enhanced in a lab at 14). They also cram in endless references to the games, including energy swords, first-person views from inside Chief’s helmet and aliens with invisibility camo. The overall result is distinctly mediocre TV, with entertaining fight scenes and effective, if predictable, plot twists, but little nuance or originality. It’s unlikely to appeal to anyone outside Halo’s gamer fan base. But with gamers numbering almost 3bn worldwide, that might be enough to make the show a success. A second season has already been greenlit.

Halo is just one of a host of games being turned into series as streaming platforms voraciously buy up valuable sci-fi and fantasy IPs, particularly those that bring substantial pre-existing audiences with younger demographics. On the way are lavish adaptations of zombie masterpiece The Last of Us for HBO, with Chernobyl writer Craig Mazin attached, as well as shows based on narrative games Life is Strange and Disco Elysium, coming to Amazon. Dozens more are in various stages of production, including fresh iterations of Resident Evil, Tomb Raider and Assassin’s Creed as well as Splinter Cell and Fallout.

We already know from decades of dreadful film adaptations that games can be tricky to adapt. Do they have a better chance on the small screen?

What film directors seem to miss when adapting games for cinema is that games do not revolve around stories we are told but worlds we inhabit. They need to ask what it means for this story to be watched rather than played, and how it might have to change accordingly. In that respect, TV may prove a more natural fit. The length of a series creates space for the sprawling storytelling style of games and their myriad characters. This breathing room should also allow showrunners to capitalise on the abundant lore and environmental detail of modern games, which assist in the trendy pursuit of “world-building”.

Two TV shows that offer hope for the form are both animations. The first is Castlevania, a vampire story based on a series of hit 1990s games, which has become a surprise hit on Netflix since launching in 2017. It is sharply written with mature themes and thoughtful plotting and paved the way for last year’s Arcane. Another Netflix show, Arcane digs into the origin stories of two heroes from the online battle arena game League of Legends using striking animation that blends hand-painted textures with 3D graphics. Unlike other adaptations, Arcane forgoes fussy plot exposition in favour of character-driven drama and plays loosely with its source material, focusing on the complex relationship between two women and including action only where it meaningfully impacts the narrative.

Both have charmed audiences far beyond the world of gamers. Arcane has even earned a place in IMDB’s list of the highest-rated 25 TV shows of all time, in the company of The Wire, Breaking Bad and Ken Burns’s docu-series The Vietnam War. It is the first truly great gaming adaptation but, judging by the sheer quantity of series to come, it is unlikely to be the last.