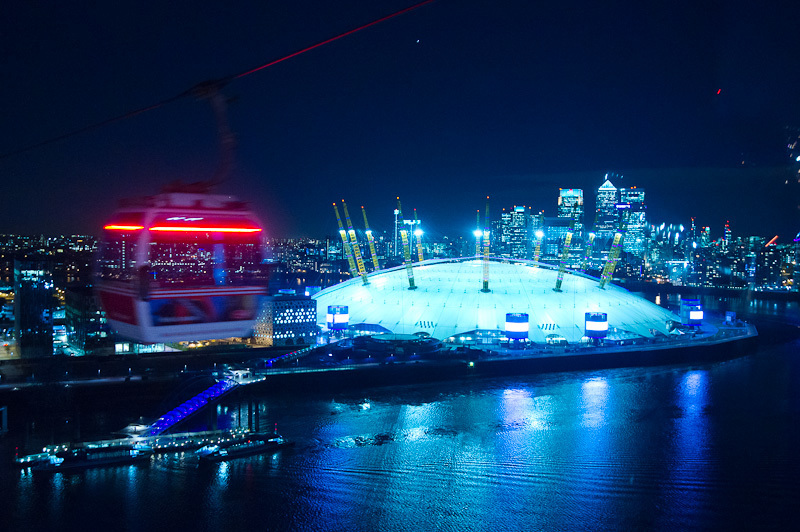 It seems there’s a new story on London transport ridership each month, each marginally more positive than the last.

Tube ridership at 75% of pre-pandemic levels on weekends. Some buses are at 87% ridership levels. TfL proudly broadcasts every incremental rise in users, to inspire confidence among users. However, there’s a mode of TfL run transport that regained 100% ridership as far back as June 2021. That vital transport link, which Londoners rushed back to en mass? The Emirates Airline.

You might think I’m having a laugh. Bashing ‘The Dangleway’ is a cherished pastime for the commentariat, but the post pandemic ridership of London’s most-maligned mode of transport is buoyant. In fact, the cable car not only reached pre-pandemic ridership levels in June, it then absolutely smashed them come August. That month (or more precisely that 28 day reporting period) was the busiest it had been since 2015. It was the sixth busiest period on record, which — considering the top three occurred right at the start of the cable car’s life, when it was still a new toy most Londoners wanted to play with — is mighty impressive.

The last time it recorded such a high numbers of users was 2015. So, what happened?

The social media platform has evolved since the days of mostly showcasing dances and lip-sync videos, and is now home to a wealth of content. Early on in 2021, various TikTok videos of people riding the Emirates Airline began racking up views. Most were tagged #thingstodoinlondon, at a time when — thanks to nation’s third lockdown — there was precious little to do. The video clips are mostly 20 seconds long, shot with a backdrop of blue skies, pink sunsets, crystal clear nights. They follow a reliable formula: a couple of establishing shots of the cable car, boarding, and then lots of rapid cuts of the views on offer.

Each video inspired more and more copycats, until it reached the point that near hour-long queues were reported outside the terminal — people desperate to get a piece of the action they’d ogled on social media.

Then it all suddenly died down. Why? For one thing, as Covid restrictions lifted, there were more #thingstodinlondon. By November the cable car’s ridership had more or less returned to its pre-pandemic levels. And frankly, those levels aren’t very good.

Back when the cable car opened in 2012, then-TfL commissioner Peter Hendy, said it would have “serious public transport use.” This has rarely been the case though, despite its presence on the tube map. In fact, three years after opening it had no regular commuters.

So the argument that the Dangleway offers the city any useful transport connection doesn’t hold much water. Could the Mayor’s recent office move to the cable car’s north terminal have a positive impact on ridership? Maybe, although The Crystal’s (the building they’ve moved to) prior residents didn’t have much of an effect.

For now, TfL has mostly conceded that the cable car is for leisure, not transport. And simply not enough people have been making use of of these leisure capabilities. Financially that could have caused issues, but the sponsorship from Emirates has meant it’s always been profitable.

However, that deal expires in June 2022. So what lies ahead for a post-sponsorship cable car?

How desperately does the cable car need a new sponsor?

The Guardian recently revealed that TfL is yet to secure a new sponsor for the cable car. This came despite cutting the price tag to less than a quarter of the £3.6m paid annually by Emirates.

Aside from the obvious point that TfL needs to generate funding by all means necessary right now, just how desperately does the cable car specifically need sponsorship? A freedom of information request from 2021 peeled back the financial curtain. Over the course of a four week period, the cable car usually costs TfL between £400,000-£500,000 to operate, although a TfL spokesperson said “we do expect to achieve some operating savings this year.” Its fare revenue does handily outstrip that figure over the peak season in summer, but there are also lean months, where the cable car falls well short of operating costs and only remains profitable thanks to the monthly £227,000 sponsorship revenue.

In the last full financial year before covid struck (2018/19), operating costs outstripped fare revenue by just over £100,000. In 2017/18 operating costs were roughly £250,000 more than fare revenue. Put simply, without a sponsor the cable car runs the risk of becoming a loss making venture.

TfL is outwardly optimistic about the cable car’s finances until a new sponsor is in place, saying: “We remain confident the cable car will continue to cover its operating costs ahead of sponsors being found. We continue to look at new revenue streams, which include new customer experiences and events such as Valentine’s Day and Easter.”

If the bumper summer of 2021 can be replicated this year, financial sustainability is possible. And TfL is doing its best to recreate that success.

The hunt for cable car influencers

TfL clearly took notice of the impact TikTok had on the cable car. After nearly 10 years and numerous campaigns to inspire ridership — none of which were resoundingly successful — here was something organic that was attracting people to soar above the Docklands. Naturally, TfL attempted to replicate the phenomenon.

In late 2021, numerous influencers on Instagram started posting short videos showcasing their trips on the Emirates Airline. But there was a difference between these and the videos on TikTok a few months earlier; this was paid-for content, sponsored by TfL. There’s little stylistically to differentiate the videos from those that went viral on TikTok, apart from the fact that the paid-for clips put more focus on the cable car’s prices.

Did it work? The videos received fewer views than the wildly viral TikTok clips, then again, that’s to be expected of paid-for content. It’s hard to see an uptick in ridership that can be attributed directly to these videos, like the organic craze in the summer.

TfL says it’s still reviewing this campaign to understand its effectiveness before it decides whether to continue with the promotion strategy.

Could the cable car fail?

Say there’s no new sponsor, and Londoners can’t be influenced into riding the cable car? If it becomes a loss making venture, could the cable car be scrapped? Not really. This was a pet project of former London Mayor Boris Johnson, who (as you might have heard), is now prime minister. His government is directly in control of TfL’s funding in its dire post-covid state. Tearing down one of Johnson’s crowning “achievements”, then, is likely off the table. That’s why TfL is so determinedly looking for a sponsor.

Josh Crompton, TfL’s Head of Cable Car, said: “The search for a new sponsor for cable is ongoing and we are continuing with market engagement for a new commercial partner who shares the ambition to build on its success and help maintain its position as one of the best things to do in London.”

On TfL’s website, there’s a page dedicated to the cable car sponsorship opportunity. Among the many benefits lifted in sponsorship — alongside a place on the tube map and being in the heart of one of London’s “richest destination zones” — is the social media reach. TfL encourages potential advertisers to search for the cable car on TikTok, to see content that reaches an estimated 2.7 million people a month.

Not only is TfL hoping social media can boost the cable car’s fare revenues, it also wants it to help secure a new sponsorship.

One of TikTok’s most-viewed videos is of a guy performing a Harry Potter-inspired illusion, in which he ‘flies’ on a broomstick. Could the social platform still perform its greatest miracle yet: becoming the saving grace of London’s quirkiest piece of transport infrastructure?

Harry Rosehill is the author of Routemasters of the Universe, available now.