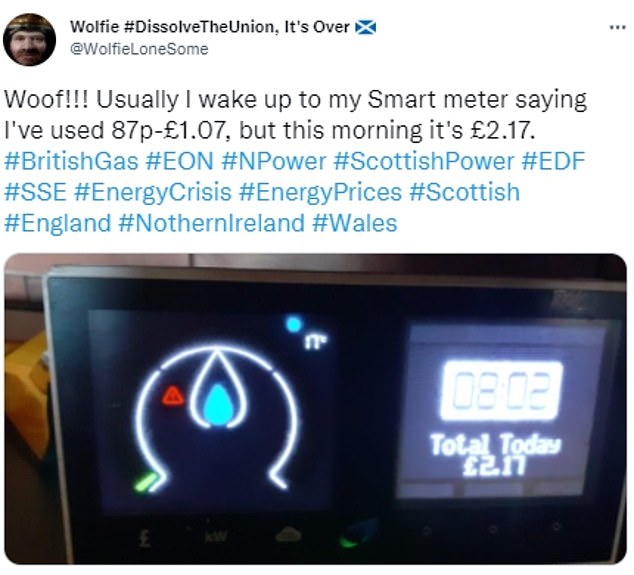 The cost of living crisis will deepen for many households as energy bills are skyrocketing due to an increase in the price cap to almost £2,000.

However, higher energy prices are not the only way households and businesses are set to feel the pinch.

From the start of the month, a raft of tax rises and reductions in state pandemic support will increase costs for businesses and, ultimately, lead to higher prices for their customers.

MailOnline readers have described how they will cope, including reducing mortgage payments, raiding savings and even growing their own food to make ends meet.

Mrs Joseph, from Pitsea in Essex was astonished to receive this bill advising her that from today her annual electricity is set to rise by £1,193.31.

Sam, who lives with son Tyler, 11, told MailOnline: ‘You’d think from the amount they’re charging that we live in a mansion but there’s just the two of us in a small terraced house and we are careful with our electricity use and use a smart meter as it is.

‘The rise was so big it was shocking and I don’t know how I’m going to cope. I’m not working currently after a bereavement and bills were already difficult. I had to get help from my mum recently to avoid getting into debt – and now this. It’s a kick in the teeth.

‘I’ve now had to tell my sons that we need to save money on what we’ve been doing and that’s going to mean turning the heating off and using much less hot water. But it’s hard to explain that to them especially when it’s snowing like it did yesterday.

‘This just feels hard to cope with to be honest. How can they justify this?’

The Manchester pensioner says he cannot pay his bills and pay for food.

He said: ‘I’m going to grow, and I’m going to fill my freezer this year with my own produce. I’m going to have to. I can’t go away this year again, not because of Covid or anything. I just can’t afford to go away.

‘The state pension that we’re getting at the moment does not cover what I need’.

She said: ‘My hours fluctuate weekly and so my wage varies each month. I find that this can make it difficult to manage my money, and some months I don’t have enough to cover my outgoings and have to dip into savings.

‘The rise in living costs is worrying. At the moment, it’s just me and my partner that we have to pay for but with bills and potentially rent all increasing, our money has to stretch even further.

‘Months where we haven’t worked many hours, or haven’t been able to top it up with overtime, creates a perfect storm and we will really notice the difference. We’re lucky that we have a bit of money in savings’.

Ms Blythe, founder Storm in a Teacup Gifts, in North London, has warned she and others face a mental health crisis.

She said: ‘When I started my business seven years ago, I knew that it would be hard work and that I would face challenges.

‘The impact the current crisis has had on my mental health is exponential. Having to decide whether to pay an invoice for marketing services or to stock my business or my gas bill was never something I thought I would do.

‘I’d like to think I’m resilient, but I struggle now to plan ahead. My customers keep me going but it breaks my heart knowing that they’re struggling too. It’s time Sunak stepped up’.

The hypnotherapist and from Spalding, Lincolnshire, says extra layers of clothes are needed because she can’t afford the heating.

She said: ‘I’m getting a £150 a month rise here and that’s with already being in credit with the company.

‘Our house is a cold house at the best of times, and I work from home, so rather than having the heating on its jumpers and an electric blanket.

‘I’m going to watch the heating with this draughty house that has no double glazing with high ceilings’.

Natalie is CEO of oral care brand SmileTime in central London with warehouse in Wembley.

She said: ‘Our London based warehouse costs for heating are rapidly increasing after today as well as personal costs for heating our five-bedroom house in the countryside! Feeling it from both a personal and professional standpoint.

‘We are from South America and like to keep warm. But we’ll be keeping heating on a timer and switching heating off in the summer months. For our business we are looking at trying to do something similar but will have to negotiate that with the landlord (a company) as they have a say in how that’s all managed’.

The businesswoman from Plymouth, Devon, says they will have to reduce their mortgage payments to make ends meet,

She said: ‘We have a large four bed house plus an Airbnb in the basement apartment and it is very cold down there, so we need to have the heating on most of the time.

‘The rise is going to cripple us financially. We have readjusted our finances and made our mortgage payments smaller to help with the monthly costs. We have also been saving – the last few months I’ve been paying extra into our energy suppliers’.

Hell for households: How much more YOU will be paying in bills from April 1 (and it’s no joke)

Annual energy bills will soar by 54 per cent today as regulator Ofgem raises the price cap for an average home to £1,971 from £1,277. Experts believe it will be £600 more from October.

Fuel prices have surged to a record high of £1.66 a litre of petrol and £1.78 for diesel as it emerged that motorists have been hit by daily increases for six weeks.

The cost of filling up a typical family car with a 55-litre tank is now £81.41, up from £58.56 in May 2020, when petrol prices plunged because of the first coronavirus lockdown.

More than half of town halls will charge over £2,000 in average council tax bills this April. The typical Band D bill in England will be £1,966 – up 3.5 per cent on last year. The highest in the country will be in Rutland, where residents will receive bills of £2,300. The highest increase is in Sandwell in the West Midlands – up by 5.2 per cent. For the first time, more than half of local authorities will charge in excess of £2,000 for Band D households.

National insurance increases worth around £6billion are taking effect in a few days.

Sky is hiking prices of broadband and TV channels by an extra £43 a year from April in a fresh cost of living blow. Families will need to fork out an additional £3.60 a month, Sky estimates, as it raises the costs across its services.

Sky joins other broadband and TV providers such as Virgin Media, which is already set to hike prices by an average of 4% from March 1, 2022.

And BT, TalkTalk and Vodafone are increasing prices by as much as 9%.

A cut in VAT has ended meaning landlords say they must add 20p or more to the cost of a pint. To make ends meet they say that £7 a pint might be needed in some London pubs.

Britons will face paying up to £3 per lateral flow test from April 1, despite French supermarkets offering them for three-times cheaper.

The Prime Minister scrapped ‘free’ lateral flow tests from today. People who opt to keep testing face spending £20 for a box of seven — around £3 per test.