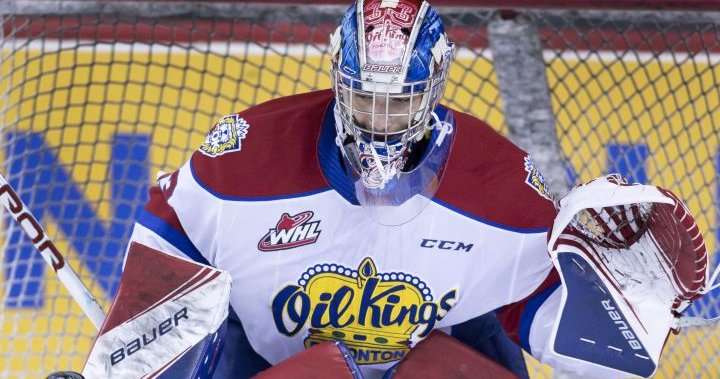 The Seattle Thunderbirds were unable to get a puck past Oil Kings goaltender Sebastian Cossa in Game 3 of the WHL championship series Tuesday night as Edmonton earned a 4-0 win.

The road victory saw the Oil Kings take a 2-1 series lead after splitting the first two games at home.

Cossa stopped all 21 shots he faced while Seattle goaltender Thomas Milic turned aside 33 of the 36 shots he faced before being pulled for an extra attacker late in the game.

Forward Jakub Demek opened the scoring for the Oil Kings at the 17:02 mark of the second period. He carried the puck from his own zone, cut in front of a Thunderbirds defender behind Seattle’s blue line and went from his backhand to his forehand before burying the puck in the net.

Edmonton defenceman Simon Kubicek scored on the power play 4:10 into the third period. Teammate and fellow blue-liner Kaiden Guhle added another goal 11:47 into the third while forward Carter Souch scored an empty-net goal with 41 seconds left in the game.

Oil Kings forward Justin Sourdif had an assist and was plus-two during the game while also dominating in the faceoff circle, winning 14 of 20 draws. He was named the game’s first star, Cossa was named the second star and Souch was named the third star.

The series resumes in Washington on Wednesday night for Game 4.