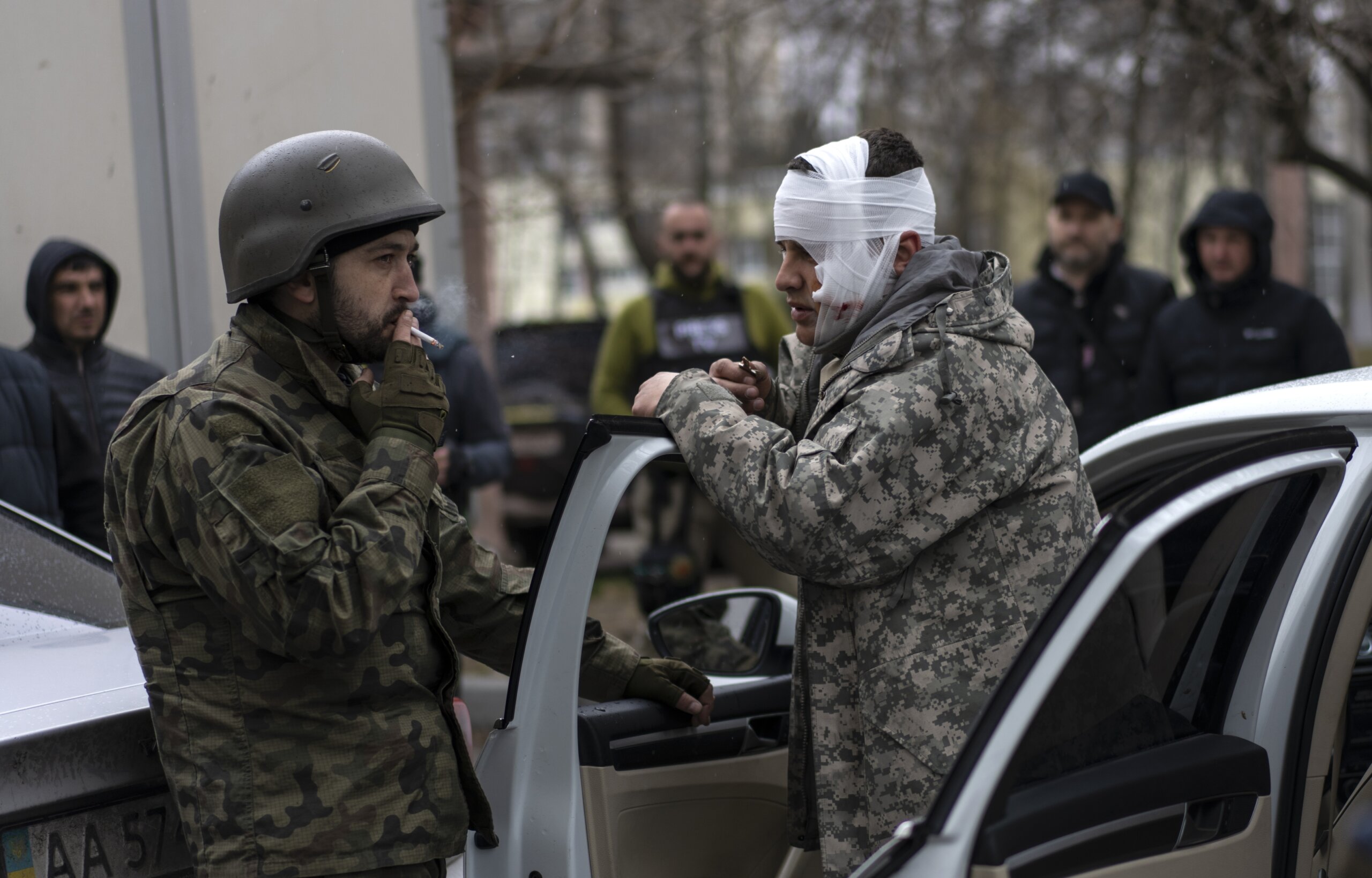 The Ukrainian president said his country’s defense against the Russian invasion is at a “turning point” and again pressed the United States for more help, hours after the Kremlin’s forces reneged on a pledge to scale back some of their operations.

KYIV, Ukraine (AP) — A convoy of buses headed to Mariupol on Thursday in another attempt to evacuate people from the besieged port city, while Russia pressed its attacks in several parts of Ukraine ahead of a planned new round of talks aimed at ending the fighting.

After the Russian military agreed to a limited cease-fire in the area, the Red Cross said its teams were traveling to Mariupol with relief and medical supplies and hoped to help pull civilians out of the beleaguered city on Friday. Previous attempts at establishing a similar humanitarian corridor have fallen apart.

Russian forces, meanwhile, shelled suburbs of the capital that Ukraine recently retook control of, a regional official said. New attacks in the area where Moscow had promised to de-escalate further undermined hopes of a resolution to end the war on the eve of a new round of talks. A day earlier, Ukrainian officials reported that Russian shelling on the outskirts of Kyiv and around another city where it had vowed to ease up.

Russia’s Defense Ministry also reported new strikes on Ukrainian fuel stores late Wednesday, and Ukrainian officials said there were artillery barrages in and around the northeastern city of Kharkiv over the past day.

Despite the fighting raging in those areas, the Russian military said it committed to a cease-fire along the route from Mariupol to the Ukraine-held city of Zaporizhzhia from Thursday morning.

Ukrainian Deputy Prime Minister Iryna Vereshchuk said 45 buses would be sent to collect civilians who have suffered some of the worst deprivations of the war. Food, water and medical supplies have all run low during a weekslong blockade and bombardment of the city. Civilians who have managed to leave have typically done so using private cars, but the number of drivable vehicles left in the city has also dwindled and fuel stocks are low.

The International Committee of the Red Cross, which is helping run the evacuation, said its teams have already left for Mariupol.

“It’s desperately important that this operation takes place,” the Red Cross said in a statement. “The lives of tens of thousands of people in Mariupol depend on it.”

As the new evacuation attempt was announced, evidence emerged that a Red Cross warehouse in the city had been struck earlier this month amid intense Russian shelling of the area.

In satellite pictures from Planet Labs PBC, holes can be seen in the warehouse’s roof, along with a painted red cross on a white background. The aid organization said no staff have been at the site since March 15.

Talks between Ukraine and Russia were set to resume Friday by video, according to the head of the Ukrainian delegation, David Arakhamia, six weeks into a bloody war that has seen thousands die and a staggering 4 million Ukrainians flee the country.

But there seemed little faith that the two sides would resolve the conflict soon, particularly after the Russian military’s about-face and its most recent attacks.

Russia had promised during talks in Istanbul this week that it would de-escalate operations near Kyiv and Chernihiv to “increase mutual trust and create conditions for further negotiations.” Ukrainian President Volodymyr Zelenskyy and the West were skeptical. Soon after, Ukrainian officials reported that Russian shelling was hitting homes, stores, libraries and other civilian sites in or near those areas.

On Thursday, the area’s governor, Viacheslav Chaus, said Russian troops were on the move but may not be withdrawing.

Meanwhile, the U.S. said that Russia had begun to reposition less than 20% of its troops that had been arrayed around Kyiv. Pentagon press secretary John Kirby said Wednesday that troops from there and some other zones began moving mostly to the north, and some went into neighboring Belarus. Kirby said it appeared Russia planned to resupply them and send them back into Ukraine, but it is not clear where.

Still, fighting continued in Kyiv suburbs. Regional governor Oleksandr Palviuk said on social media that Russian forces shelled Irpin and Makariv, and that there were battles around Hostomel — all to the west or northwest of the capital. Pavliuk said there were Ukrainian counterattacks and some Russian withdrawals around the suburb of Brovary to the east.

Britain’s Defense Ministry said Thursday that “Russian forces continue to hold positions to the east and west of Kyiv despite the withdrawal of a limited number of units. Heavy fighting will likely take place in the suburbs of the city in coming days.”

As Western officials search for clues about what Russia’s next move might be, a top British intelligence official said Thursday that demoralized Russian soldiers in Ukraine were refusing to carry out orders and sabotaging their own equipment and had accidentally shot down their own aircraft.

In a speech in the Australian capital of Canberra, Jeremy Fleming said Russian President Vladimir Putin had apparently “massively misjudged” the invasion. Although Putin’s advisers appeared to be too afraid to tell the truth, the “extent of these misjudgments must be crystal clear to the regime,” said Fleming, who heads the GCHQ electronic spy agency,.

U.S. intelligence officials have given similar assessments that Putin is being misinformed by advisers too scared to give honest evaluations.

With Russian troops bogged down in many places and thwarted in their attempts to quickly take the capital, Zelenskyy has said his country’s defense was now at a turning point — as he continued to plead with his international partners to provide more equipment.

“Freedom should be armed no worse than tyranny,” he said in his nightly video address to the nation on Wednesday.

He continued his appeal Thursday, asking Australian lawmakers in an online address for armored vehicles and called for Russian vessels to be banned from international ports. Prime Minister Scott Morrison had earlier told him Australia would provide additional military assistance including tactical decoys, unmanned aerial and unmanned ground systems, rations and medical supplies.

Zelenskyy then called on lawmakers in Netherlands to be prepared to stop importing Russian energy, to halt trade with Russia and to provide more weapons.

Zelenskyy said the continuing negotiations with Russia were only “words without specifics.” He said Ukraine was preparing for concentrated new strikes on the Donbas, the predominantly Russian-speaking industrial heartland where Moscow-backed separatists have been battling Ukrainian forces since 2014.

Top Russian military officials say their main goal now is the “liberation” of the Donbas, though some analysts have suggested that the announcement of the focus on the region may merely be an effort to put a positive spin on reality since Moscow’s ground forces have become stalled and taken heavy losses.

Karmanau reported from Lviv, Ukraine. Associated Press journalists around the world contributed to this report.