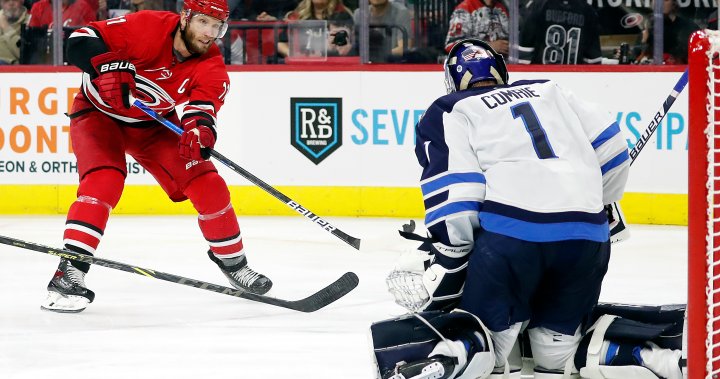 The night after being eliminated from playoff contention, the Winnipeg Jets blew a two-goal lead and wasted a brilliant 42-save performance by Eric Comrie in a 4-2 loss in Carolina Thursday night.

In Winnipeg’s final road game of the season, the Hurricanes scored four unanswered goals to cap off a winless four-game Eastern Conference swing for the Jets.

After Carolina’s stingy penalty kill nullified an early Winnipeg opportunity, the Jets got a second power play chance in the first but a Paul Stastny penalty put the teams at 4-on-4.

That’s when Kyle Connor struck first blood for the Jets. The speedy winger carried the puck into the Hurricanes zone before losing it in a scramble in front of the net. But Pierre-Luc Dubois found it, circled behind the net and fed a perfect pass to Connor who deposited the puck into a yawning cage for his 44th of the season.

Carolina would amp up the pressure in the latter half of the period, thanks in large part to a pair of power plays but Comrie, making his second straight start in goal, stood his ground, stopping all 17 shots he faced in the first.

Comrie got some additional run support with 65 seconds left in the first when Dubois beat Antti Raanta with a slick wrist shot through a screen. It was Dubois’ 27th goal of the season, matching his career high set four years ago in Columbus.

It became increasingly clear as the second period went along that Comrie’s play was by far the lead story of the night. Carolina dominated play throughout the middle frame but Comrie made save after save, many of them coming on high-quality opportunities.

Whether it was a quick-reaction pad save on Tony DeAngelo or a full-split denial of Max Domi in close, Comrie stole the show to keep the Jets in front.

Winnipeg had a great chance to counter with just under four minutes to go in the period but Zach Sanford hit the post on an odd-man rush. The forward has yet to score since he was acquired at the trade deadline.

Comrie’s shutout bid was finally broken on Carolina’s 33rd shot of the night. With the Hurricanes on a 4-on-3 power play with less than 30 seconds left in the second, Teuvo Teravainen beat Comrie with a wrister for his 20th of the season.

But the Jets still led had the lead, and entered the game with a 25-0-1 record when leading after two.

Just over four minutes into the third, however, the lead disappeared. After Andrei Svechnikov gained the zone with a strong net drive, the puck made its way around to Jaccob Slavin, who was able to slide it into the net for the equalizer.

Four minutes later, the Hurricanes would grab the lead for the first time. A point shot from Brendan Smith jarred Comrie’s helmet loose but before the whistle was blown, the puck fell right to the stick of Seth Jarvis in front of the net.

The Winnipegger banged home the rebound to put Carolina ahead. Winnipeg challenged the play for goaltender interference but the call on the ice stood.

A final push by the Jets was fruitless as Jordan Staal iced the game with an empty netter in the final minute.

The Hurricanes outshot the Jets 46-22 on the night, including 12-5 in the final period.

Comrie kept his team in the game with 42 saves while Raanta only had to turn aside 20 shots for the win.

It was a disastrous final road trip of the season for Winnipeg, losing all four games, all to playoff teams, by a combined margin of 20-7.

The Jets begin a final four-game homestand to close out the season Sunday against Colorado.