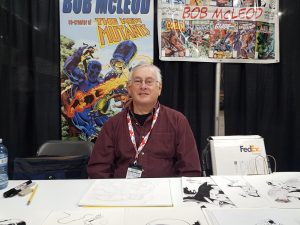 Celebrities, cosplayers and vendors bring in lots of people to the Calgary Comic & Entertainment Expo every year but it’s the comic book artists/creators that started it all.

There once was a time when the comic book folks made up the entire Calgary Expo and many will tell you it’s a great chance to get out and meet their fans.

One of those is Dan McLeod, who along with Chris Claremont, created one of the most iconic Marvel superhero teams ever in 1982’s ‘The New Mutants.’

Dan Parent stepped right out of school into the iconic Archie Comics and has really brought the franchise into the 21st Century.

The 2022 Calgary Comic & Entertainment Expo was the first held since the pandemic to include relaxed restrictions.