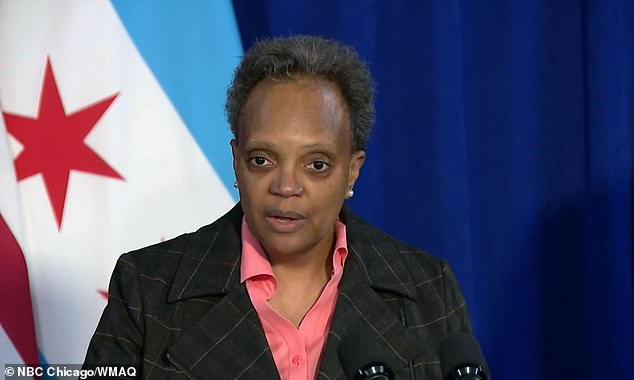 Chicago will become the first major city to hand out vouchers for gas stations to residents, in a bid to combat soaring fuel costs and soothe growing complaints.

Lori Lightfoot, the mayor of Chicago, announced on Thursday that 50,000 gift cards worth $150 will be issued via a lottery system.

The city will also hand out 100,000 pre-loaded cards for public transit worth $50, the mayor added.

‘People have to be able to get to work, school, places of worship, medical offices, grocery stores,’ Lightfoot said.

‘The goal of this program is to help make those moves easier.’

Illinois has some of the highest gas prices in the country, outside California.

In the city of Chicago, the average price of a gallon of gas was $4.843 on Thursday.

The national average price for a gallon of gas is currently $4.225, according to consumer group AAA.

Lori Lightfoot, the mayor of Chicago, is pictured on Thursday announcing the delivery of the free gas giftcards

‘I know from talking to many residents that they are feeling the strain,’ said Lightfoot.

‘And many are unable to fill their tank as much as they normally would because their dollars just don’t stretch that far.

‘So my administration’s been working through a variety of options to see how we can provide the greatest relief to as many residents as we can.’

Last week it was reported that she was considering removing the tax on gas as a temporary measure to reduce costs.

‘I’m going to encourage the Attorney General to look into this huge rapid escalation in gas prices,’ she said.

‘I’m very concerned about gas gouging, and I’m not accusing anyone, but it’s worthy of the Attorney General to look at this, because the escalation is really pricing people out.’

Motorists are pictured lining up for fuel in Chicago on March 17, amid soaring prices

A woman walks past a gas station in Chicago on March 3, with prices approaching record highs

Average gas price across US is steadily falling having reached an high of more than $5.00/gal

Her remarks came as President Joe Biden announced he would release a million barrels of oil per day from the nation’s strategic reserve for the next six months, and accelerate the switch to electric vehicle.

Biden said Thursday that record gas prices were caused by the pandemic and Vladimir Putin’s war in Ukraine, as he unveiled the two-pronged plan to increase supply and reduce demand.

Lightfoot’s cards are available to people who are a Chicago resident, aged over 18, and who have a current and valid city sticker with correct mailing information for their vehicle.

They must also have a household income at or below 140 percent of the Area Median Income for Chicago.

The cards will be valid for one year after issued and can only be spent on the cost of fuel at gas stations located within the city of Chicago.

Chicago residents can begin applying for the cards on April 27, pending approval from City Council, the mayor said.

Applications are limited to one per household, and cards will be distributed in May.

Lightfoot’s scheme was celebrated by some residents, who have been complaining about gas prices.

‘I will never allow my tank to get past a 1/2 tank ever again!! I have NEVER paid $50 for gas until today. Chicago prices are absurd,’ tweeted one.

But others said it was not the solution.

‘#Chicago handing out loaded gas cards- that’s sure to help reduce demand and prices… @LoriLightfoot clearly didn’t read my email warning of consequences of this.’

‘I reiterate. Everyone in govt needs to pass Econ 101. All they know is to throw money at problem, which now creates inflation!’

Biden on Thursday acknowledged that, at the start of the year, the price of a gallon was about about $3.30, while today it is averaging about $4.22.

‘Nearly a dollar more in less than three months,’ he said. ‘The reason for that is because of Putin’s war.’

In Los Angeles, drivers are paying more than $6 a gallon.

‘The problem we’re facing with gas prices has two roots,’ he told reporters at the White House.

‘First, the pandemic. When COVID struck demand for oil plummeted so production slowed down worldwide.

‘Because of the strength and the speed of recovery, demand for oil shot back up much faster than the supply. That’s why the cost of gas began to rise last year.

‘The second root is Vladimir Putin.’

At the start of the year the price of a gallon was about about $3.30, he continued, while today it is averaging about $4.22. ‘Nearly a dollar more in less than three months,’ he said. ‘The reason for that is because of Putin’s war’. He also urged Americans to switch to electric cars

The result has contributed to spiraling inflation and a disastrous series of poll numbers for Biden, as Democrats prepare for difficult midterm elections.

The White House has been desperately seeking a fix, and Biden unrolled his proposals on Thursday afternoon.

It will include asking Congress to impose fines on gas companies that aren’t producing energy from public land, as he seeks to tackle record prices at the pumps.

At the same time he will use the wartime Defense Production Act to accelerate the switch to electric cars, according to senior administration officials, by producing materials needed for high-capacity batteries.

‘Under my plan, which is before the Congress now, we can take advantage of the next generation of electric vehicles,’ he said.

‘That typical driver will save about $80 a month from not having to pay gas at the pump.’

A handy saving for drivers of electric vehicles which sell for an average of more than $56,000, according to the Kelley Blue Book – $10,000 more than conventional vehicles.

But there may be short-time pain ahead. Putin signaled there could be worse to come with a threat to turn off natural gas supplies to Europe.

And Biden admitted he did not know how long it would take for drivers to see an improvement at the pumps.

‘There’s no firm answer to it,’ he said when asked by a journalist. ‘But prices already came down when it was announced ahead of time.’

He admitted that there will be a ‘slight delay’ before his plans have an impact.

The savings could be anything from 10 cents to 35 cents a gallon, he added.

The White House has been desperately looking at options to lower fuel prices. Biden will announce the release of 180 million barrels of oil – the biggest release in the near 50-year history of the Strategic Petroleum Reserve

The White House blames President Vladimir Putin of Russia and his invasion of Ukraine for sending the price of oil rocketing and with it the cost of a gallon of gas in the U.S.

Biden used his speech to accuse oil companies of profiteering from high prices and demanded that they do more to increase production.

‘Right now the oil and gas industry is sitting on more than 9,000 unused but approved permits for production on federal lands more than 12 million unused acres,’ said an official before Biden’s remarks.

‘Congress should make companies pay fees on unused wells on federal lands and on acres of public land that they’re sitting on without producing.’

The Biden administration has largely been thwarted in efforts to persuade big producers in the Middle East to increase production to compensate for shortages.

Instead the official said releasing 180 million barrels of oil would tide the U.S. over until other sources came online.

‘These barrels will be a wartime bridge to additional U.S. production and other production that we expect later this year,’ he said.

The barrels will start to flow to market in May.

Democrats around the country have been mulling state legislation to provide taxpayers with rebates that would help keep their cars filled up.

On Thursday, House Speaker Nancy Pelosi said she would consider legislation providing rebates on gas purchases as a way to help drivers cope with high prices.

But she said she wouldn’t comment on Biden’s package of measures until he had formally announced them at the White House.

‘It’s supposed to only be used for large-scale emergency or conflict,’ he said in an emailed statement.

‘Now I see where Biden has just announced he’s going to take what we so carefully and magically built, and what will be a futile attempt to reduce oil and gasoline prices.

‘They will soon bring it down to empty again. It just never ends!’

Putin threatened more shots in the energy wars, with a threat to shut down natural gas supplies to Europe if customers refuse to pay in roubles.

The move would mark the third time the United States has tapped its strategic reserves in the past six months. Pictured, an aerial view of Phillips 66 oil refinery is seen in Linden, New Jersey

The Russian president, announcing a decree in televised remarks, said foreign buyers would have to ‘open rouble accounts in Russian banks’ which can be used to pay for ‘gas delivered starting from tomorrow’.

‘If such payments are not made, we will consider this a default on the part of buyers, with all the ensuing consequences. Nobody sells us anything for free, and we are not going to do charity either – that is, existing contracts will be stopped,’ he said.

Oil prices dropped on Thursday morning, by as much as $5 a barrel, as details of Biden’s plan emerged.

The International Energy Agency has called an emergency ministerial meeting for Friday to discuss oil supply, a spokesperson for Angus Taylor, the Australian energy Minister, said on Thursday.