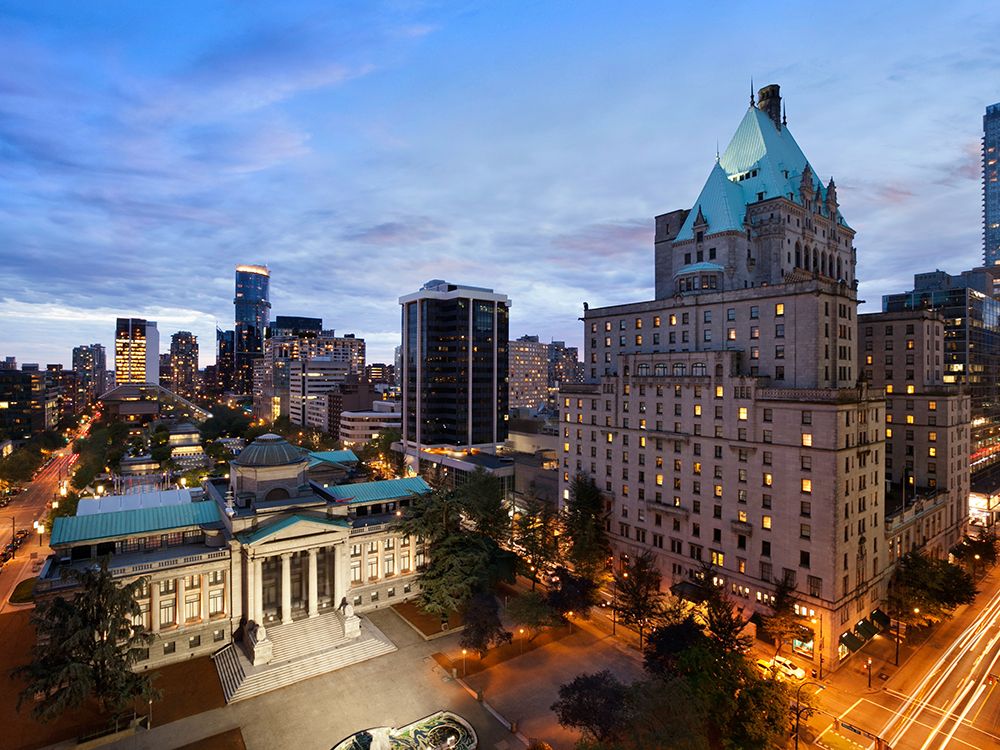 In what was supposed to be the summer of the road trip, global forces have many British Columbians rethinking those weekend getaways. Call it a pain-at-the-pump pause.

Instead, they’re staying close to home and discovering, perhaps rediscovering, why so many global tourists have a Vancouver summer holiday on their bucket lists. That’s why so many downtown hotels are laying out the red carpet for locals with staycation deals and alliances with nearby attractions and exhibits.

All of which is perfect timing for the iconic Hotel Vancouver, which has tied up the bow on a massive, and somewhat lengthy, $75-million renovation that has seen the Grand Dame of Georgia Street returned to her former glory. In particular, the ninth floor Gold Level’s 50 rooms and private guest lounge have received major upgrades in keeping with the hotel’s luxurious history and splendid architecture.

I’d stayed here a few years ago, pre-renovation, and came away with the same impression that I’ve had from so many of these classic Fairmont hotels, such as Victoria’s Empress, Toronto’s Royal York, and Seattle’s Olympic. They all have incredible architecture dripping with history and an undeniable sense of majestic permanence, however the guest rooms themselves were pretty ordinary, and in some cases dated in terms of bathroom fixtures and amenities, audio/video technologies and even such a small, but increasingly vital, thing as USB outlets. Seems Fairmont execs felt the same way, as all those mentioned properties have all seen major, multi-million-dollar renovations in the past few years that have brought their guest rooms into the 21st Century. That’s certainly what I discovered on a recent overnight stay on the Gold Level at Hotel Vancouver.

The gold guest rooms, which include three-bedroom suites that can accommodate up to 10 guests, now feature a warm and nostalgic palette of deep navy blues, heather gray, gold metals and marbles, and Axminster wool custom carpets with large scale patterns run throughout. A major part of the renovation involved artisans restoring, and when necessary, repairing or replicating all the original plaster crown moldings, woodwork, decorative built-in fireplaces and shelving. Likewise, the lounge has been entirely redone, as has the elevator lobby and Gold Level check-in station. Fairmont hotels pride themselves on service, and this ninth floor Gold Level ups that with dedicated concierge service that provides itinerary planning, dinner and theatre reservations, delivering a morning coffee to your room and free shoeshine and garment pressing. Sort of that old school service, which just seems right considering Hotel Van’s rich and romantic history.

With the lounge offering a complimentary daytime service beginning with a full breakfast buffet, mid-afternoon scones and pastries, hors d’oeuvers from 5 p.m. to 7 p.m. and finally sweet treats from 7 p.m. to 9 p.m., I was almost tempted to just stay in the comfy confines of the Gold Level for my entire stay. I say almost, as another free treat for Gold Level guests is a two-hour bike rental from nearby Cycle City that promised myself and my companion not only a good workout but rekindled my profound appreciation for the city that lured me away from home three decades ago.

We checked in early and left our bags with the concierge staff then headed out for the block walk to Cycle City on Hornby Street, where we had the oft-chance pleasure to be outfitted by founder and, according to his business card, chief pedaler Josh Bloomfield. The store’s rental fleet is big varied, but as we discovered if you want one of their very popular e-bikes, a reservation is in order. Instead, we were set up with a couple of very nice commuter-style bikes with locks, helmets, maps and ride route suggestions. We were off, and almost at once I came to appreciate all those downtown bike lanes that sometimes have me cursing when behind the wheel. To paraphrase that time-honoured saying, ride a mile in their clip-in shoes.

Fortunately, Josh had kindly extended our two-hour ride time to three, and we covered some ground during that time, a testament to the cycling network established in the downtown core and beyond. First it was down to Coal Harbour and around Stanley Park, then along False Creek to Olympic Village, then onto Granville Island where we left the bikes with the free bike valet service for a walk around the island. It was the first time I’d been there since before the pandemic, and it was heartening to see the market buzzing, the restaurants alive with the sound of people, and the streets alive with the sound of children.

On the ride back to the hotel, apart from thinking about dinner at Hotel Van’s Notch8 restaurant, which has a new chef and respective new menu I found myself looking at sights I pass on almost a daily basis— Science World, False Creek, the downtown skyline, the North Shore mountains — and seeing them with fresh eyes. Might have been the oxygen I’d been taking in on the ride or the unique – for me at least — perspective afforded by cycling past familiar places. Whatever it was, it was a bit of a revelation and underscored what a special, and unexpected, experience a staycation can be.

Residents of British Columbia, Washington State and Alberta get 20 per cent off luxury accommodations with complimentary parking included. Visit here.

Make it a date night to remember with bubbly, chocolate-dipped strawberries, breakfast in bed, late check-out and complimentary parking included. Check it our here.