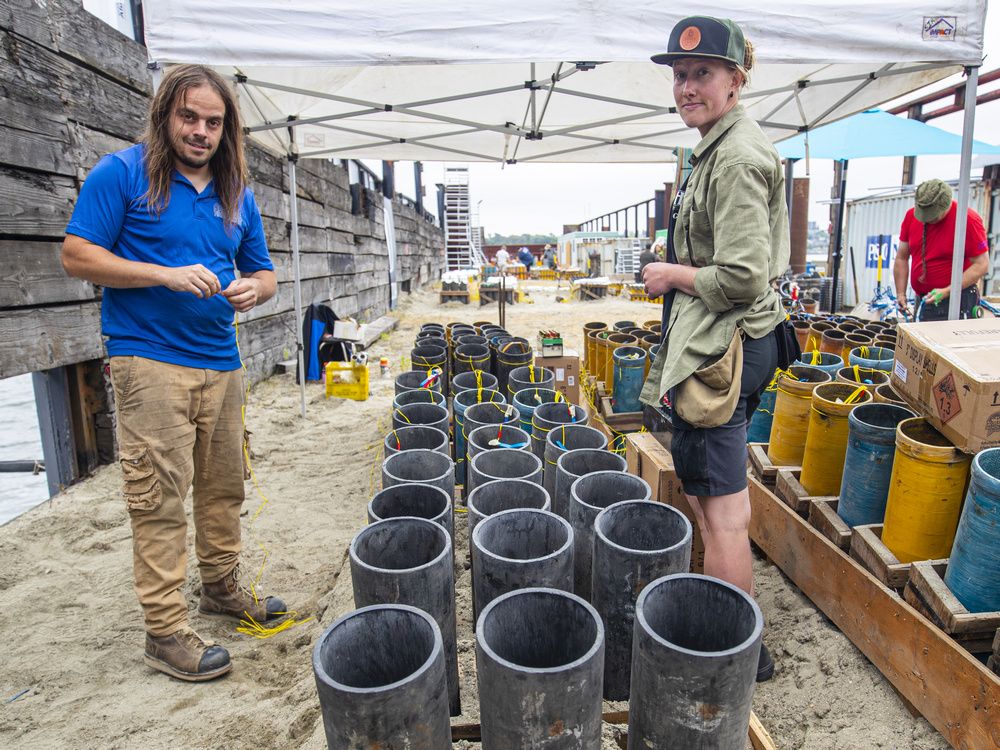 The pipes stick out like gun barrels on navy ships in sand spread across two joined barges in English Bay, a smaller supply barge tethered behind them.

The pipes, buried to specific depths for the 30th Honda Celebration of Light, range in diameter from 50 to 150 millimetres, and all three countries — Japan, Canada and Spain this year — competing have the same choice to choose from.

“The differences in the shows is completely up to the teams,” pyrotechnic expert Kelly Guille, president of Winnipeg-based Archangel Fireworks, said. “They’re offered a ($70,000) budget and they can use it however they see fit within the criteria.”

Foil covers the pipes that have had their mortars loaded so sparks from fireworks set off previously don’t make their way down to the explosives. Tarps cover the pipes if it rains between shows.

“And if we’re expecting rain on show night, we put poly over the whole thing and just shoot right through it,” Guille said.

“And please don’t be looking down the pipes, that’s a live product,” he added as he guided a group of visitors across the joined barges.

There are two explosives inside each firework: The little spark tails you see as fireworks climb is a fuse lit by an initial explosion; a second explosion sets off the light show at altitude. Dozens can be launched within a small fraction of a second of each other.

“This is a loaded 75 millimetre shell,” Guille said as he pulled the fireworks out of a pipe.

It looked like a small balloon filled with sand, with a little cone holding the initial charge at the bottom and a wire connected to a firing module, itself connected by two wires all the way to the other end of the barges along with all the other modules to the computer firing system.

And that is why the Japanese team sent just their fireworks this year.

Because of Japanese COVID-19 protocols, the team would have had to quarantine upon returning to Japan, so the team itself won’t be on the barge for the July 23 show, it’ll be Guille turning a key for Akariya Fireworks’ computer-controlled program.

Canada’s entry is Midnight Sun Fireworks, a husband-wife team from Yukon that performs Wednesday night, a duo that brings passion and playfulness to their displays, Guille said.

Spain, represented by a company founded in 1860, Pirotecnia Zaragozana, brings the 2022 event to a close on Saturday, July 30.

There’s office space, a safe shed — protected by bombproof glass — to watch the show from, bathrooms, generators, fire extinguishers and a large fire hose with a pump to draw water from English Bay.

Had the Japanese been able to be in Vancouver physically, they would have been in a supervisory role as trained staff do the actual labour of installing the explosives.

“The most dangerous part, the most intense part, is putting the match to the fuse, that’s the only real dangerous thing,” Guille said. “It’s all within federal government regulations, and Canada enjoys a really great safety record due to proper licensing and how much training we have before we get out here on the barges.”

The music and light show began in 1990 as the Symphony of Fire and bills itself as the longest-running off shore fireworks competition in the world, attracting perhaps 1.2 million people to English Bay over its three nights.

“The biggest thing is knowing your product,” Guille said. “Knowing what the sparkles do, knowing how to use them to evoke emotion and match the music.

“But just playing music and setting off fireworks, even if they were synced timewise, doesn’t necessarily mean you’re putting out an effective scene. It’s all about knowing your product, and then having a knowledge to match that product to what the piece of music is emoting.”

There will be extra police, fire, ambulance, park and 911 staff on duty, as well as increased SkyTrain, SeaBus and West Coast Express runs.

Organizers stress the Celebration of Light is a family event and remind the public that the parks and beaches where the show can be viewed from are booze-, vape- and cigarette-free zones.

If you’re bringing children, you’re urged to establish a safe place and the children have your phone number in case you get separated.

“It’s the biggest event since the pandemic began,” Sgt. Steve Addison of the Vancouver police said. “Stay safe while you’re having fun.”

City, RCMP and navy marine units will be on the water, where various boats (and sometimes the odd swimmer) compete for limited space, then make their way back to shore in the dark.

Roads, especially in the West End, will be closed, forcing the rerouting of some buses, while paramedics will be on UTVs and bicycles. Real-time updates can be found of the VPD’s social-media channels.

Nine-one-one calls have historically surged during the fireworks, especially on the Saturday shows, Jasmine Bradley of E-Comm 911 said. In many cases it’s accidental dials, kids playing with a parents’ phone or people reporting gunshots.

The park board asks that you not bring glass containers and don’t dig holes in the sand. Staff arrive on-site in the morning and aim to clean up the beaches and parks by 9 a.m. after each show.