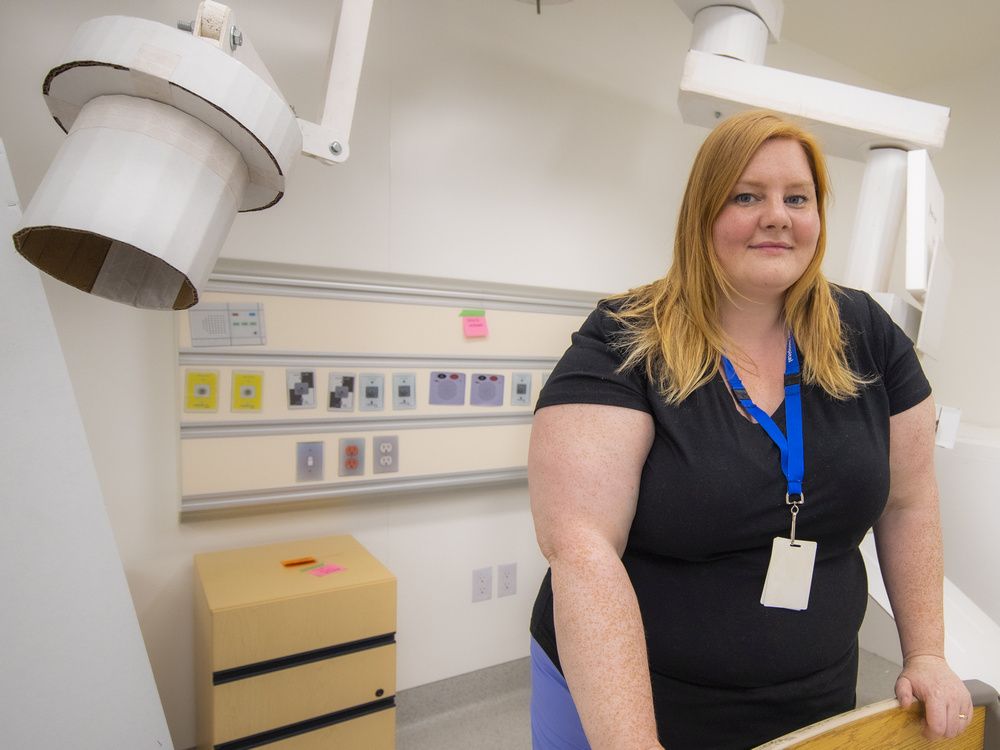 In a nondescript warehouse in Burnaby, doctors and nurses have been moving cardboard exam lights, foam furniture, and code-red-button stickers inside life-size replicas of the operating and exam rooms that will one day be the heart and soul of the city’s hospital redevelopment.

It was a bit like playing in a giant doll house, right down to the plastic baby on the make-believe scale in the fake trauma room. But with much higher stakes.

The clinical teams worked with architects and the construction contractor to figure out the most optimal size and location for all the gear that must fit in these rooms: sinks, patient lifts, glove dispensers, IV poles, and much more.

One of the biggest challenges was cramming staff and medical equipment into the three-metre-wide emergency exam rooms through the narrow entrance left by the folding door.

“That just barely made it,” nurse Michelle Gunawardana said as she watched a wheelchair being pushed through the narrow gap.

“Right now, the stretcher doesn’t fit,” said one of her colleagues, as an architect measured the door opening before leading a debate on how to fix the snag.

Over the past two weeks, about 10 teams from various Burnaby Hospital departments, including maternity, mental health and surgery, have toured through the mock-ups to provide feedback to the architects planning the $1.3-billion upgrade, which will add two new patient-care towers with an expanded emergency department, a new cancer treatment centre and about 100 new beds.

“This is really, really helpful because the front-line staff actually have the opportunity to show what’s meaningful to them,” said nurse Sarah Bell.

“There’s always the fear that the people who are designing this, with all the best of intentions, don’t actually have to use the equipment, and they don’t actually have to go and mix up the medications, or get something out of the fridge, etc. So, I think this just gives us the opportunity to really make sure that the space works for us.”

On Tuesday, a Postmedia reporter and photographer tagged along with about a dozen Fraser Health employees, most of them nurses and doctors from the emergency department, who toured the resuscitation and exam rooms.

“The team assessing where everything is located for efficiency and safety is so helpful in the mock-up,” said JoAnne Rowell-Wong, an emergency room physician at Burnaby Hospital for 30 years. It “allows us to communicate live and run scenarios, to really see ourself in action in the space.”

Although the Burnaby clinical teams said it was unique for them to provide this feedback while inside a full-scale cut-out of their future work space, the approach is becoming common, said Anita Wempe, chief clinical planner for the hospital’s redevelopment.

Typically, when construction companies bid for hospital contracts, they must now promise to build these mock-ups before the official building gets started, Wempe added. In this case, the make-believe rooms and equipment were created by EllisDon, which is doing the first phase of the Burnaby development.

In the warehouse, there are replicas of a half dozen key rooms you would see in a hospital. The resuscitation room, where the most critical patients go, includes a pump infusion machine carved out of foam, along with a massive cardboard boom that holds a light, oxygen, cardiac monitors and suction device — so these things will not clutter counter space.

During our visit, the team focused on the proposed exam rooms in the emergency department. There will be more than 20 of these spaces, but to get that many for a busy ER, the trade-off was making them about three metres wide, slightly smaller than in some other hospitals, the architects explained.

The proposed rooms, though, are a vast upgrade over Burnaby’s current emergency department exam bays, which are even smaller and partitioned only by curtains that offer little privacy for patients. A wall, however, can’t be moved slightly or pushed away like a curtain, so all the gear and people need to squeeze inside the new walled spaces.

The door of the room is comprised of three glass panels that accordion-fold, and can be tucked away against the wall to give a large opening. It can also be partly folded and locked into place to provide a more natural-looking doorway that is 0.8 metres wide, and which affords more privacy for the patient.

But the crews discovered this week that a standard stretcher won’t fit through that space, and it was a tight squeeze to get the large crash cart through. Having to fully open the door every time a big object needs to be rolled in and out is inconvenient and also really loud, as the panels make a series of clunking noises as they move.

“If this patient has to go for a CT or X-ray or anything like that in the middle of the night, it seems tough to have to bash the door down every time. It’s quite loud,” said Bell.

One of the architects involved in designing the hospital rooms, Sylvie Gagnon with Kirsten Reite Architecture, said there were several possible solutions: She could look for different doors that would leave wider openings, or the doorway could be made wider by expanding into the wall space.

“We’re just over 800 millimetres right now. It seems a little tight. I personally feel better if we were closer to 900, so three feet, which is like a regular door,” she said.

Gagnon spent the day posting bright pink sticky notes all over the exam room, indicating where the nurses and doctors wanted things added, removed or relocated.

A sticker for the code red button was moved from the side of the bed to the middle, so it’s accessible to staff on both sides.

A second “sharps” box, for disposing used needles, was added, so there is now one on either side of the bed.

The bed was pulled forward so the foam garbage bin, originally on the right side of the room, was tucked behind so it’s more reachable.

“How do we feel about the monitor being on the left-hand-side?” Bell asks, sparking a conversation that results in the cardboard square marked “physiological monitor” being relocated to above the bed, where staff say it will be easier to see while working.

“Is there any reason that clock is on the side wall, rather than the back wall?” registered nurse Christie Laurel asks of the paper clock taped to the left wall. She was told feedback provided by patient advocates included moving the clock from behind the bed, so the patient can also see the time.

Dispensers for hand sanitizer and gloves will now go above the nurses’ care cart beside the bed, readily reachable but where they won’t hamper the medical team’s movements.

The patient lift dangled from the back left corner of the room when this exercise began and ended up hanging in the front right corner after staff debated where it would be less obtrusive when not in use.

The cardboard exam light can reach all the way to the end of the bed, which Rowell-Wong gave two thumbs up. At Burnaby Hospital right now, many expandable lights don’t go that far so she frequently has to search for another light source when she has to examine a patient’s foot.

The clear theme that emerged was how to create as much space as possible in the small exam room to allow for a medical team and large gear, such as a crash cart, to get inside when a patient is in distress.

The porcelain sink, which sticks half a metre out of the wall, could be shrunk by 20 per cent if replaced by a stainless steel option.

There was talk of trying to find a smaller care cart, which holds all the nurses’ supplies, but takes up a lot of real estate in the rear left corner.

There is simply no room for a visitor’s chair.

One concern raised by the nurses is whether they would feel trapped in the cramped space if a patient became violent, an increasing worry in B.C. where nurses have reported facing verbal and physical abuse, including yelling, racial slurs, thrown food and physical assault.

“It makes me nervous, there’s so much stuff here that we’re pushing out of the way … in case there was a code white,” registered nurse Laurel Christie said of the alert used by health care workers when violence is threatened.

“I agree,” added Rowell-Wong. “Safety is frequently a problem.”

Suggestions were made to provide health care workers with a more direct path to the door. And the sticker standing in for the “duress button,” which staff press when they are in trouble, was moved from the right side of the room to the left, where the clinicians said they would feel more trapped.

The overall consensus, though, was that the walled room was much better than today’s curtained bays.

“(The walls) constrain your space, which we’re finding because you can’t just push through the curtains, but it does give you that better infection control,” said William Hartenberger, Fraser Health’s clinical planner for the redevelopment, who was the pretend patient as the medical staff worked in the faux exam room.

“I didn’t think there would be this many comments in such a small room. Then again, this is a vital room for you.”

At the end of May, the premier and health minister attended a sod-turning to mark the beginning of the first major redevelopment in 40 years of the hospital, which opened in 1952.

However, at the same time as that announcement, emergency wards in Clearwater, Port McNeill and other B.C. communities had closed temporarily due to worker shortages and patients were referred to larger hospitals, raising concerns about whether the province had enough staff for expanded hospital sites, such as the new one in Burnaby.

On Monday, as he celebrated the opening of a new nine-storey tower at Kamloops’ Royal Inland Hospital, Health Minister Adrian Dix said persistent emergency room closures are a “significant problem.”

He said the staffing shortages are largely caused by health care staff calling in sick, and insisted the province and health authorities are working to recruit and retain health care staff. “We’re focusing on recruitment every day in these communities,” Dix said.

The Burnaby redevelopment will begin with a six-storey pavilion with 83 patient rooms, a maternity unit, an in-patient area with outbreak zones to isolate those with infectious diseases, and a space for patients struggling with mental health and substance problems. The second phase is to include a new surgery centre and emergency department expansions.

Construction is scheduled to be completed in 2026.