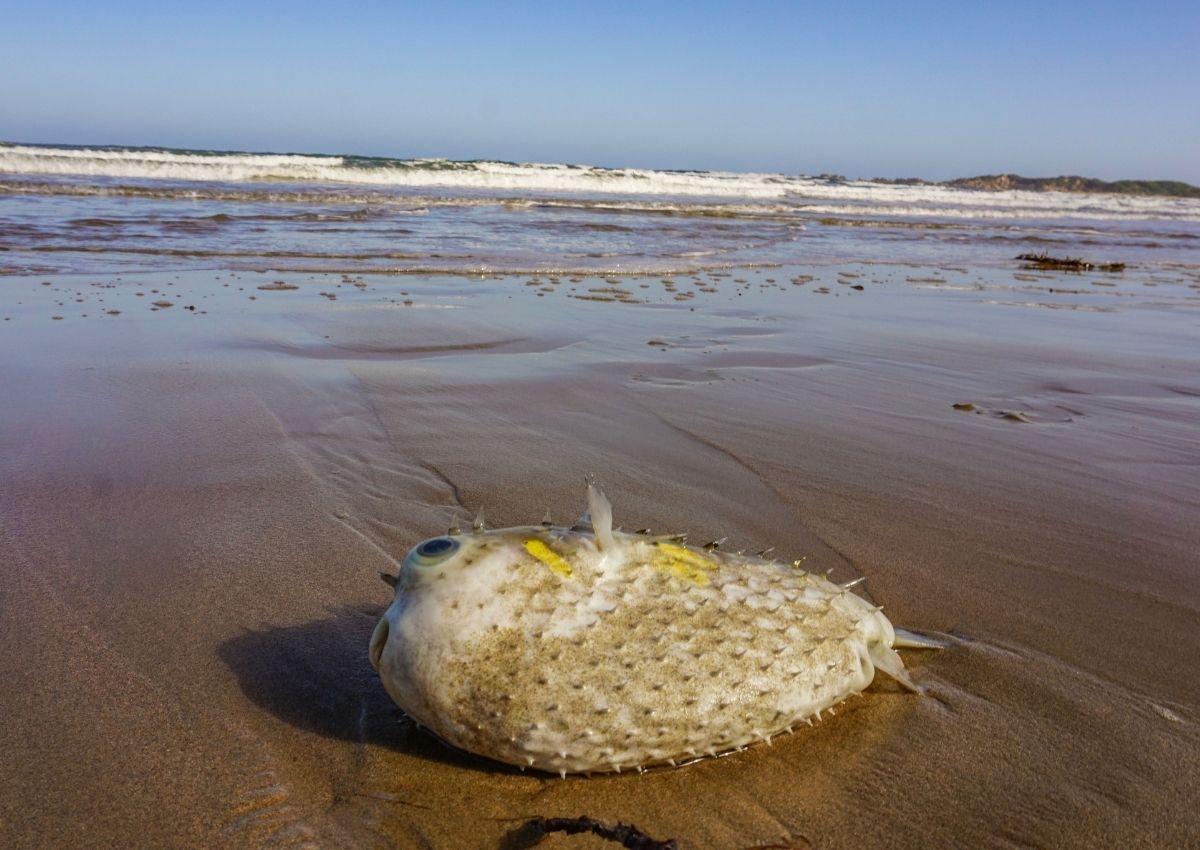 The City of Cape Town has warned Capetonians to steer clear of the pufferfish washed ashore at a beach in Cape Town.

This comes after more than 80 pufferfish were washed ashore in Simon’s Town on Wednesday.

PUFFERFISH CONTAIN DEADLY NEUROTOXINS AND SHOULD BE AVOIDED

Pufferfish contain a deadly neurotoxin and should be avoided.

According to a statement by the City of Cape Town, it is unclear what caused the pufferfish to wash ashore.

Penguin rangers from Seaforth have been collecting and bagging the fish for proper disposal.

“Residents and visitors are reminded not to handle the pufferfish. Those walking their dogs should ensure that their pets do not come in contact with the fish either, as it carries the neurotoxin tetrodotoxin and should not be consumed.”

The City, furthermore said it would be monitoring beaches from Fish Hoek to Simon’s Town in the coming days. Any further pufferfish will be removed.

The City removed almost 70 bags of dead pufferfish, weighing 200 kilograms, from beaches along the Muizenberg and Fish Hoek coast last year around the same time.

WHAT SHOULD YOU DO IF YOU TOUCH A PUFFERFISH?

According to National Geographic, Tetrodotoxin is up to 1,200 times more poisonous than cyanide to humans. If you come across a pufferfish, it is recommended that they only be handled using thick gloves to avoid contact with the trace amounts of Tetrodotoxin that have been known to be secreted from their bodies.

One of the adaptations that helps the pufferfish survive is the ability to produce a poison known as tetrodotoxin. This toxin is secreted across their body, making puffers dangerous to touch and even more dangerous to consume.

The toxin is found on the skin and internal organs of the pufferfish and is approximately 1,200 times more poisonous than cyanide. … pufferfish, either alive or dead, can be fatal to both humans and dogs alike if ingested in large enough quantities.

More than 60% of all fugu poisonings will end in death. After the toxin has been consumed, you have less than sixty minutes to get respiratory treatment which is your only hope of surviving the effects of this powerful poison.

ALSO READ: Warning: Do NOT eat any fish or shellfish washed ashore in the Red Tide

WHAT ARE THE SIGNS AND SYMPTOMS OF POISONING IN PETS?

Tetrodotoxin is extremely fast-acting. Within minutes, signs of poisoning start to become apparent, and after a few short hours paralysis will set in. In severe cases, pufferfish poisoning proves fatal within an hour.

Early signs and symptoms include:

Symptoms will then progress to:

Quickly signs and symptoms will become more severe including:

HOW IS PUFFERFISH POISONING TREATED IN PETS?

If you see your dog eat or mouth (licking or chewing) a pufferfish take them to the vet immediately. On your arrival your vet will perform tests, such as blood tests, to determine the severity of the poisoning. As there is no antidote for tetrodotoxin poisoning, treatment involves:

If treatment is sought many pets will recover within a day or two. Without treatment, pets who become paralysed are not likely to recover.