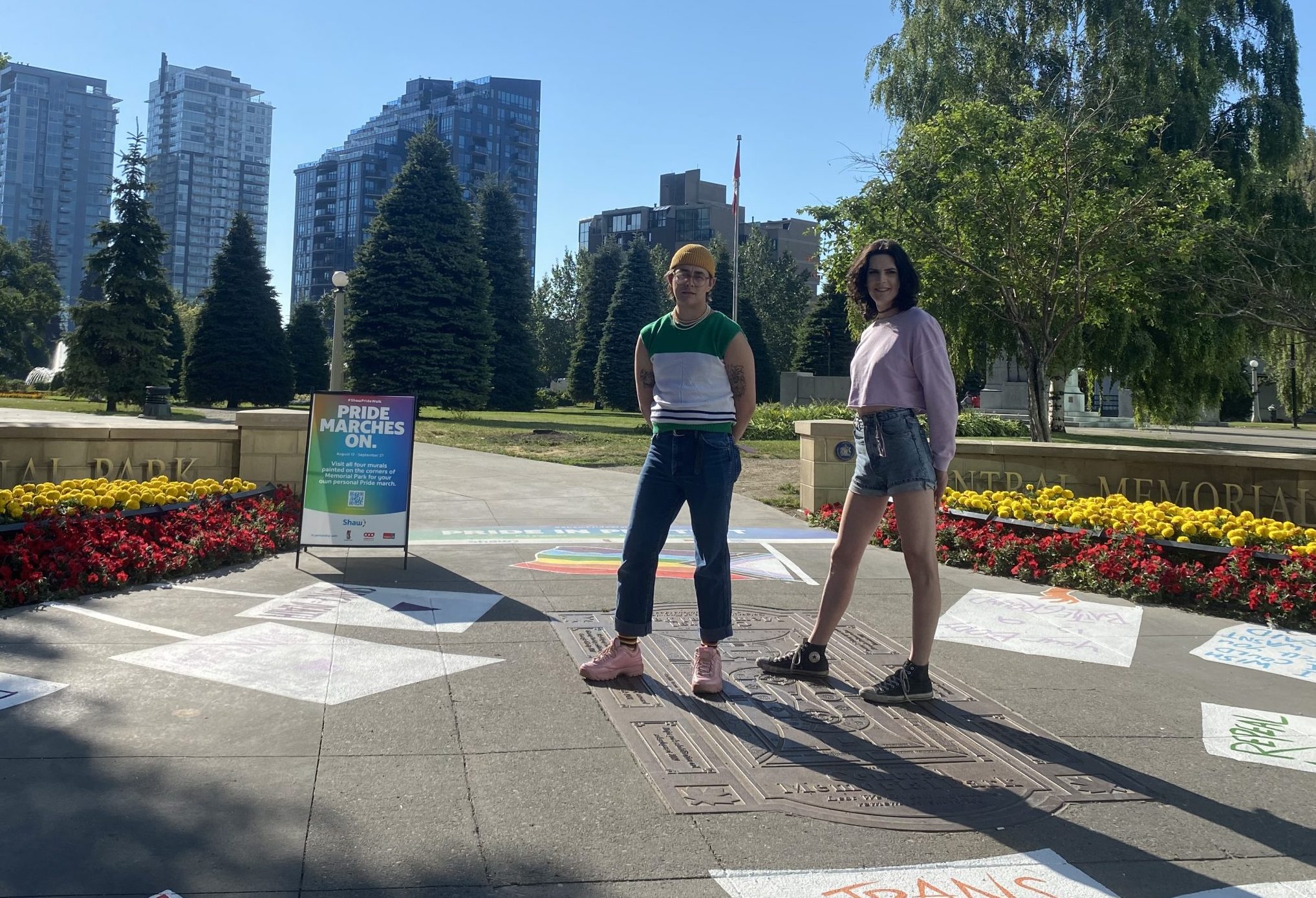 Three new murals in Calgary’s Central Memorial Park have been unveiled by the city to celebrate Pride.

The vibrant, meaningful works are part of Shaw’s Pride Marches On and are creating visibility for the 2SLGBTQ+ community and its allies.

Calgary Pride’s theme this year is 2SLGBTQ+ refugees and newcomers, and they will be the marshals of this year’s parade.

Kat Simmers and Ryan Danny Owen are the artists behind Pride in Protest, and in their artist statement they say that “Pride in Protest draws upon a history of resistance and advocacy.”

The mural is a homage to the idea that Pride is not a party, but an ongoing fight for equal rights.

“The first [pride] rally did take place in Central Memorial Park many, many years ago here, so we kind of wanted to talk about the fact that queer people have been living and fighting for their rights,” said Ryan Danny Owen.

“Exploring history and the fact that these words on protest signs, and these words that mean something back in the 80s mean just as much today,” Owen said to CityNews.

Simmers, who worked alongside Owen, told CityNews that “if you’re not making work that’s actively political, then you’re just beautifying the status quo.”

Ward 8 Councilor Courtney Walcott, who spoke at the unveiling, recognizes there are opponents to displays like this and what they stand for, but says it’s no reason to stop creating them.

“Sometimes, when you put a public display on, there is a risk associated with it every single time, but that’s actually the reason why you want to,” Walcott said.

“It is dangerous to speak up, but it is so important that we continue to do so.”

Madina Kanayeva, manager of development and membership for Calgary Pride, says that art is one of the most effective ways to express hardship and love.

“Being able to tell our stories [and] our lived experiences, it’s how we communicate to the rest of the world. The things that we go through and the challenges and things we overcome, are just really symbolic and beautiful.”

Dancing to My True Colours by artist Chey Suwâtâgâ Mû creates representation for the Indigenous community, and is on the corner of 13 Avenue and 2 Street SE.

Spectation, by artists Nicole Wolf and Sarah Slaughter, was inspired and modelled by diverse members of the 2SLGBTQ+ and BIPOC communities, according to their statement. It is located at 12 Avenue and 2 Street SE.

“We have all different types of bodies, all of the expectations, every type, hidden behind and released by all of the local plants, and that’s in support of the territory and the space we’re working in,” said Slaughter.

Each mural has a QR code beside it for people to scan and learn more about the different pieces.

Calgary Pride takes place from Aug. 26 until Sept. 5, and these works will be at Central Memorial Park until Sept. 27.