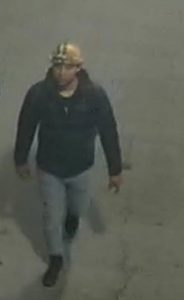 Calgary police have released more photos of a suspect in a possible arson investigation, and are appealing to the public to help identify him.

The man was captured on surveillance video just moments before an occupied home caught fire in the southeast community of Varsity on May 18.

Calgary police say the same person may have been responsible for another fire which was reported earlier Saturday morning when a two-storey single house was burned down in the 1200 Block of Varsity Estates Road N.W. around 5 a.m.

Calgary police say the suspect is described as a man between 20 and 30 years old, clean shaven, and is usually wearing a hat and carrying a black backpack.

Calgary police say there is no information that indicates these are targeted incidents and the motive behind them remains unknown.