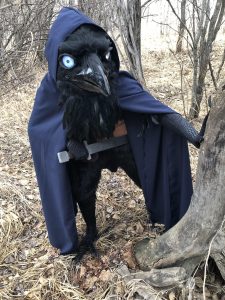 Calgary cosplayers are gearing up for the 2022 edition of the Calgary Comic and Entertainment Expo.

The festivities get underway Thursday and for the first time since the pandemic, the event is back to what it looked like prior to 2020.

Not having the Expo during the pandemic may have been tough for many, but it allowed cosplayers an extended time to work on their outfits.

Emily Eaid bought her earlybird tickets in December and spent much of the pandemic designing and making her cosplay, which is when someone dresses up as a character (usually from sci-fi, anime, or a comic book).

Eaid tells CityNews she has always been into cosplay. She started in 2009 and didn’t know how to do much, so she would hit up thrift stores and get clothes similar to what a character would wear.

“It wasn’t terrible but looking back for my progression over time, yeah it was pretty bad,” Eaid said. “But everyone has to start somewhere. That’s what I always tell kids and everyone, it doesn’t matter what age you are, you gotta start somewhere.”

At the Expo, Eaid will be wearing a cosplay of her original Dungeons & Dragons (D&D) character, named Trinket. In the game, she takes the form of a Kenku, which is a fantasy humanoid bird-like creature.

“The idea started when I started playing D&D because during the pandemic everyone was just finding stuff to do,” she said. “I thought Dungeons & Dragons was going to be too intense for me, I’ve never tried anything like that. But I joined a very friendly beginner campaign as they’re called, and it was all good and I just fell in love with it right away.”

Eaid says in order to play, you need to create a character, which is how Trinket came about. She says one day she came across a mask with a beak on it and knew that had to be part of her cosplay.

Eaid says she was given a description of her character by her Dungeonmaster (the person who controls the game), and being an artist who graduated from the Alberta University of the Arts, she was able to start drawing her design.

“I was able just to kind of imagine it, so I drew it, and then from that drawing, I used that as the basis to plan for the costume,” Eaid said. “I built individual pieces over time and it just all came together.”

“When I first saw it all together, I didn’t even look in a mirror. The first time I tried it on all together was a couple weeks ago and I literally tried it on in the woods for a photoshoot,” she said. “So I didn’t actually know what I looked like until I saw the photos. And when I saw those photos I was like ‘oh my God, I look like I am in a movie or something for Dungeons & Dragons,’ like it was insane.”

Eaid will be competing in a contest at the Calgary Expo for the first time ever.

She’s taking part in the Masters of Cosplay Grand Prix: Stampede Qualifier in the Novice Division.

Eaid is also encouraging other people interested in cosplay to try their hand at it.

“I believe really anyone can do it because I know people who can’t draw but they can make like anything they think of so I just tell people just to go ahead and just try.”