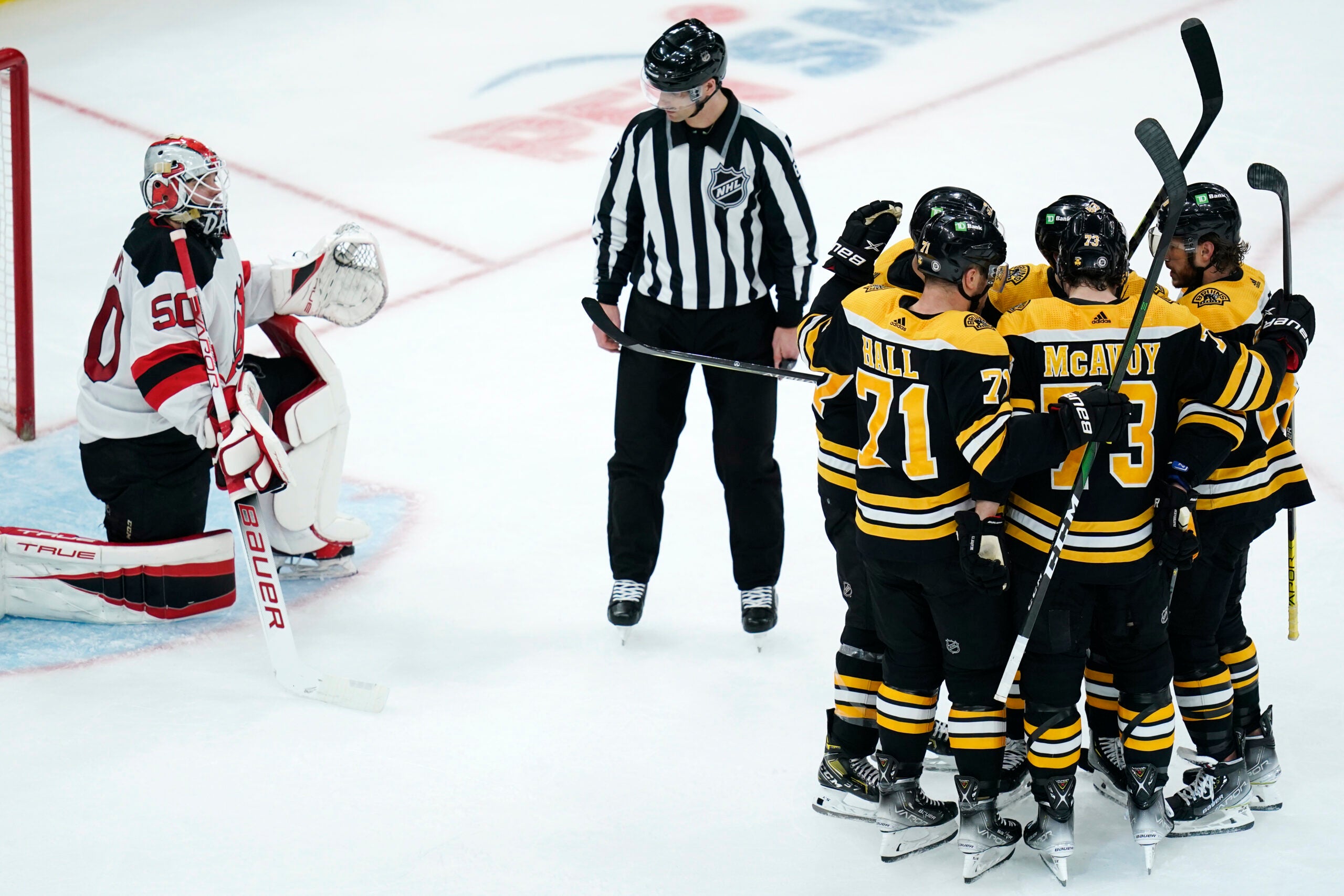 Brad Marchand had two goals for Boston and had a third waved off — even as fans littered the ice with caps to celebrate the would-be hat trick. Patrice Bergeron had a goal and two assists, and David Pastrnak had three assists to help the Bruins to their most goals since Thanksgiving, 2019.

Matt Grzelcyk, Jake DeBrusk, Erik Haula and Taylor Hall also scored for Boston. Linus Ullmark made 25 saves to help the Bruins win for the fifth time in six games and the 15th in their last 19.

Jack Hughes scored for the Devils, whose ninth straight road loss eliminated them from playoff contention.

Haula and Marchand scored early in the second period to give the Bruins a 4-1 lead, then Bergeron, Marchand and McLaughlin scored three times in 3 minutes, 3 seconds off two different goalies to make it a runaway.

Nico Daws was pulled after allowing Bergeron’s goal that made it 5-1, having stopped 15 of 20 shots. Jon Gilles didn’t do much better, allowing goals on two of the first three shots he faced before settling down and stopping 17 overall.

McLaughlin joined in on a two-on-one breakaway, going to his knee to make sure the perfect pass from Trent Frederic was redirected into the net. He coasted backward into the boards with both hands raised in the air as the fans — including an estimated 50 friends and family — got back on their feet for the seventh time.

A native of nearby Billerica who had 31 points in 33 games at BC this season, McLaughlin signed with the Bruins when the Eagles’ season ended and took a spot on the third line because of an illness to Craig Smith.

Hall made it 8-1 four minutes later on Pastrnak’s third assist of the game. Marchand put another one in the net with about a minute left in the second, but the officials waved off the goal, ruling that he was offsides.

The Bruins honored longtime goalie Tuukka Rask before the game. The 2014 Vezina Trophy winner was on the ice with his wife and three daughters for a ceremonial puck drop and — perhaps for the last time — the chants of “Tuuuuk!” echoed through the TD Garden.

The franchise’s all-time leader in wins and the winner of the 2014 Vezina as the NHL’s top goalie, Rask announced his retirement last month after a setback in his attempt to come back from a torn labrum in his hip.

“It was kind of time to be honest with yourself,” he said. “I just figured it was better for everybody to call it. I had a great career. No regrets.”

Get breaking news and analysis delivered to your inbox during hockey season.