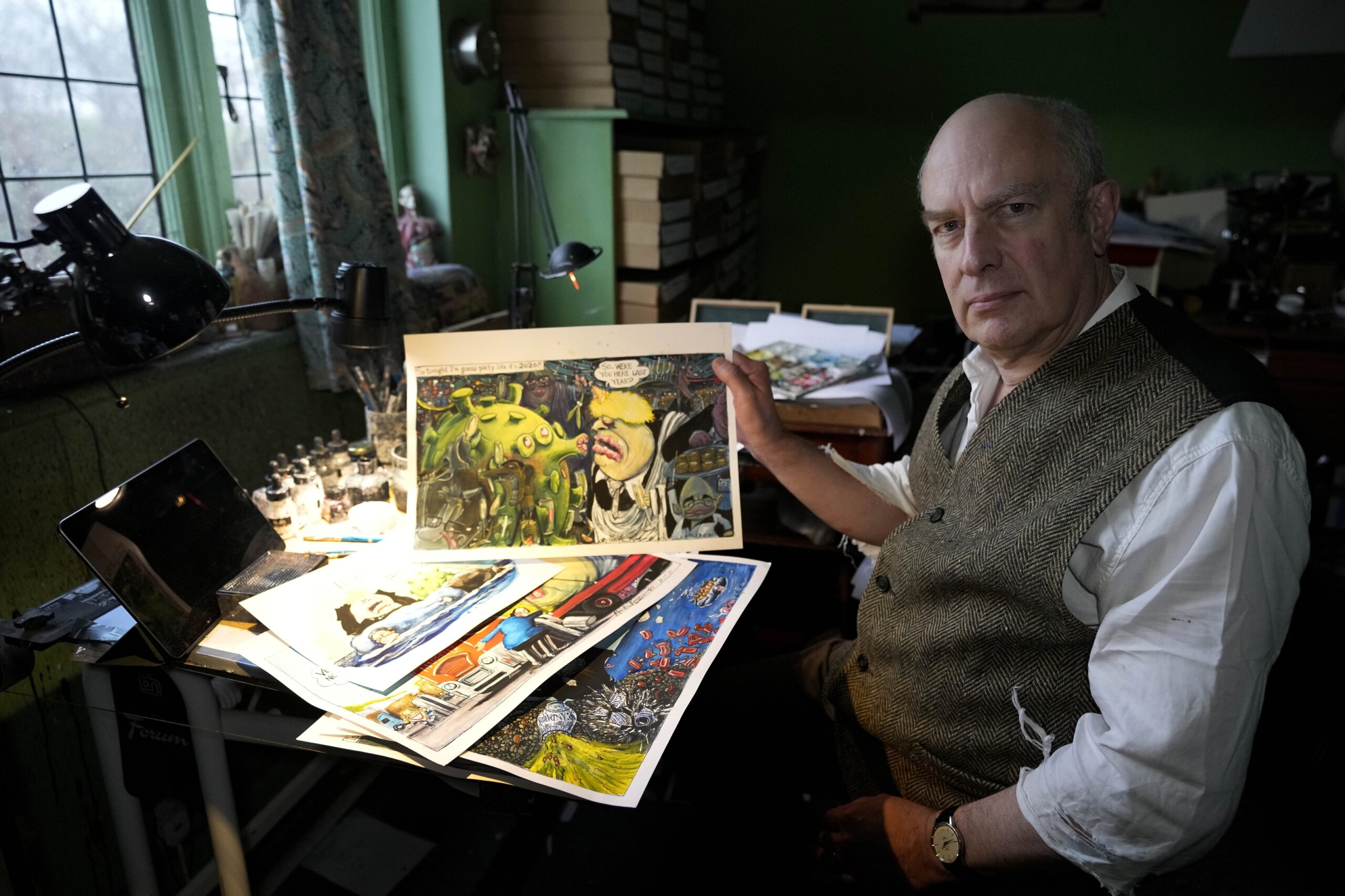 LONDON (AP) — A politician’s troubles are a humorist’s treasures. The scandal-prone British Prime Minister Boris Johnson has given cartoonists…

LONDON (AP) — A politician’s troubles are a humorist’s treasures.

The scandal-prone British Prime Minister Boris Johnson has given cartoonists and meme-makers unimaginable riches for years, and with his hold on power now in jeopardy, their fortunes are only growing.

Johnson and his staff are facing civil and criminal investigations into social gatherings they hosted last year while the rest of the U.K. was hunkering down under coronavirus restrictions. The episode raises serious questions about Johnson’s leadership and political accountability.

But what gives it extra bite — and gives humorists much to chew on — are the often ludicrous details: political aides hauling suitcases of wine into the prime minister’s residence, or drunkenly breaking a swing set belonging to Johnson’s toddler son.

One recent newspaper cartoon captured the collision of tragedy and farce by depicting Johnson as the betrayed Roman ruler Julius Caesar, stabbed in the back with corkscrews.

Martin Rowson, a political cartoonist for The Guardian newspaper, says mockery is one of the trade-offs in democratic societies between government and governed: “They have power and we have the right to laugh at them.”

Britain has a long and proud tradition of political satire. In the 18th century, cartoonists such as James Gillray lampooned British politicians and royalty with an irreverence — even viciousness — that shocked many European visitors.

British TV shows like “Spitting Image,” with its latex puppet politicians, carried on the tradition in the late 20th century. These days, internet videos and memes have joined the fun.

When Johnson became prime minister in 2019, some feared he would be hard to satirize because he was already a cartoonish figure, with his thatch of blonde hair, rumpled clothes and blustering manner.

Steve Marchant, learning coordinator at the Cartoon Museum in London, says they needn’t have worried: Johnson is a gift for humorists.

“All you need to draw is an egg with some straw on top and you’ve got Boris before you even attempt to draw the face,” Marchant said. “And he is so — gaffe-prone is probably the polite term I should use. Every week something happens with Boris. No cartoonist is going to die poor thanks to the antics of Boris Johnson.”

This, after all, is the erratic politician who once mused about being “reincarnated as an olive,” who has offended everyone from the people of Papua New Guinea to the citizens of Liverpool and who once got stuck midair on a zipline while waving two Union Jacks.

Rowson says Johnson’s cartoonish persona is deliberately crafted. He’s the latest in a long line of politicians who have “played to being caricatures” to keep themselves in the public eye.

“Even though we ridicule them at the same time, it’s a price worth paying for them,” Rowson said.

Even so, not all publicity is good news for politicians.

Much of the humor around “partygate” has an undercurrent of anger. One of Rowson’s recent cartoons depicted Queen Elizabeth II wearing a gas mask to protect herself from the rotten smell of Johnson and his Conservative government floundering in a swamp behind her. It was inspired by photographs of the monarch sitting alone wearing a black face mask at her husband Prince Philip’s funeral in April 2021, the day after one of the parties held by Johnson’s staff.

One of the most popular parodies of the “partygate” scandal is a video by the protest group Led By Donkeys that inserted Johnson into the hit TV detective show “Line of Duty.” Through digital cut-and-paste, Johnson became a suspect being grilled by the show’s anti-corruption police unit for holding illegal parties during lockdown.

“You must think we were born yesterday, fella!” the show’s no-nonsense senior police officer Ted Hastings, played by Adrian Dunbar, thundered in the video, which has been viewed millions of times on social media.

Led By Donkeys has been blending humor and activism since 2019, when a group of friends got together to blast what they saw as the lies of politicians who took Britain out of the European Union. Named after the description of British soldiers in World War I as “lions led by donkeys,” the group erected billboards exposing hypocritical statements by the Brexit campaign.

It has gone on to lambast the government’s response to the pandemic, recently parking a video screen playing testimony from bereaved families outside Conservative Party headquarters.

Oliver Knowles, one of the group’s founders, said the “Line of Duty” video struck a chord because it tapped the anger that many people feel.

“If you didn’t make your own sacrifices during lockdown, then you know somebody who did,” he said. “I don’t think it is hyperbole to say the nation is hurting.

“And I think in that context these parties — plural — of Johnson’s are very, very damaging. Actually, I think it is going to be hard for him to come back from this. I think we are now in the place where he is the prime minister who partied while the rest of us followed the rules.”

“We use laughter very much as a survival tool,” he said. “If we didn’t, we’d go mad with existentialist terror.”