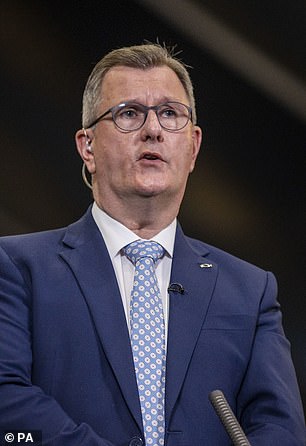 Dominic Raab today warned the EU that action on the Brexit protocol cannot be ‘put off’ after  Sinn Fein won Northern Ireland elections for the first time.

The Deputy PM renewed the threat to scrap the divorce terms unilaterally following what would once have been an unthinkable victory for the Republicans – with Michelle O’Neill now set to be nominated as First Minister.

He also also played down Sinn Fein’s push for an Irish unification referendum, highlighting that 58 per cent of the province voted for parties that do not support constitutional change.

The Stormont executive looks unlikely to get up and running as the DUP – beaten into second place – has already indicated that it will not agree to take the Deputy First Minister role.

The Good Friday Agreement requires Republican and Unionist factions to govern jointly in order for the system to function.

Completely overhauling the Brexit divorce terms has been the key demand of the DUP, who say they draw a border between mainland Britain and Northern Ireland.

But talks between the UK government and the EU have been essentially stalled for months, and Brussels has insisted it will not give more ground.

The standoff paves the way for months of deepening tensions and political drift in Northern Ireland, that could also poison post-Brexit relations.

Mr Raab renewed the vow to scrap the protocol unilaterally if there is no movement soon, accusing the EU of being ‘particularly dogmatic’ and saying the Government would take ‘whatever measures are necessary’.

He told Sky News: ‘We will deal with the situation, we will take whatever measures are necessary to protect the economic as well as the constitutional integrity of Northern Ireland.’

Mr Raab added: ‘If anything, the outcome in Northern Ireland from those elections makes it clear it can’t be put off.’

He suggested decisive action will be needed in the coming ‘weeks and months’.

Deputy PM Dominic Raab renewed the vow to scrap the protocol unilaterally if there is no movement soon, accusing the EU of being ‘particularly dogmatic’ and saying the Government would take ‘whatever measures are necessary’

Boris Johnson is betting on the Red Wall to get his premiership on track after disastrous local elections with Levelling Up and Brexit set to dominate the Queen‘s Speech this week.

The PM suffered a body blow as the Tories lost hundreds of councillors, with a bloodbath in London and the Lib Dems making gains in traditional heartlands.

Conservatives – including a serving minister – have renewed calls for the government to cut taxes in the wake of the meltdown and with the cost-of-living crisis ramping up.

However, the immediate coup threat to Mr Johnson seems to have receded, partly because Labour failed to make inroads into the Northern and Midlands areas that delivered his historic majority in 2019.

The premier – who was heavily damaged by the Partygate row – has also been helped by police announcing they are investigating whether Keir Starmer breached lockdown rules over the so-called Beergate espisode.

Deputy PM Dominic Raab admitted in interviews this morning that he faced a ‘tough fight’ to hold on to his own London suburban seat at the next election.

But he told Sky News that the party was faring better in Red Wall areas and Mr Johnson ‘can and will’ win the next election.

Ms O’Neill described it as an ‘historic day’ yesterday and pledged ‘real change’, while trying to soothe anxious unionists by adding that her party ‘will work hard for everyone’. The combined unionist vote was still larger than that for Sinn Fein but had split.

O’Neill has said there is a demand from voters to form an Executive next week, and that there is ‘space in this state for everyone, all of us together’.

Giving her acceptance speech in Magherafelt, Ms O’Neill said that the electorate wanted politicians to get working on solving everyday issues, such as the healthcare waiting lists and the rising cost of living.

‘And that’s the reason why on Monday we must all turn up together,’ Ms O’Neill said.

‘That’s the reason why on Monday, there is an urgency to restore an Executive and start putting money back in people’s pockets, to start to fix the health service. The people can’t wait.

‘I will lead my team to Stormont on Monday. The people have told us during the course of this election that they expect us to work together. The people are right.’

However, Sinn Fein’s victory will cause more political gridlock at the assembly, which was collapsed by the DUP in February.

Writing in the Mail on Sunday, former Northern Ireland Secretary Julian Smith said that Sinn Fein’s surge combined with the SNP’s victory in Scotland meant ‘our cherished Union has never been under greater threat’.

‘We now have two parts of the UK where political parties dedicated to its break-up hold the whip hand,’ he wrote.

‘The people of Northern Ireland deserve a stable and accountable local government that delivers on the issues that matter most to them.’

She tweeted: ‘I wish Michelle & her colleagues – & all Northern Ireland’s elected representatives – the very best for what comes next.’

Sinn Fein President Mary Lou MacDonald has suggested a referendum on joining Northern Ireland and the Republic could be possible ‘within a five-year timeframe’.

But the party kept such issues low down on its agenda during a campaign dominated by the skyrocketing cost of living.

Sinn Fein is now entitled to the post of first minister in Belfast for the first time since Northern Ireland was founded as a Protestant-majority state in 1921.

The centrist Alliance Party, which doesn’t identify as either nationalist or unionist, ended up on 17, more than doubling its tally.

Under Northern Ireland’s power-sharing system, created by the 1998 peace agreement that ended decades of Catholic-Protestant conflict, the jobs of first minister and deputy first minister are split between the biggest unionist party and the largest nationalist one.

Both posts must be filled for a government to function.

Mr Sefcovic is said to have informed Foreign Secretary Liz Truss that he did not believe the EU would ever go beyond its existing stance on the post-Brexit arrangements.

The UK government has repeatedly threatened to axe the protocol, agreed by Mr Johnson as part of the divorce deal, unless solutions can be found.

Ms O’Neill, who has served as deputy first minister in the power-sharing executive but is poised to become First Minister, said the party wanted to work ‘in partnership with others.’

‘That is the only way we will achieve much, much more for people here, whether in terms of the cost-of-living crisis or trying to fix our health service,’ she said.

The victory for Sinn Fein and O’Neill is steeped in symbolism and serves as a major blow to unionism.

The 45-year-old was brought up in one of the most notorious battlegrounds of the Troubles and her family were deeply involved in the clashes in East Tyrone.

Her father, Brendan Doris, was an IRA prisoner interned at the Maze Prison at the height of the Troubles while her uncle, Paul Doris, headed the Irish Northern Aid Committee that raised funds for the IRA in the US.

Her cousin, Tony Doris, was one of three IRA men killed in an SAS ambush in 1991, when O’Neill was 14, while another was injured.

She joined Sinn Fein only after the Good Friday Agreement was signed – at the time, she was 21 and married with a child – and worked for the MP Francie Molloy for seven years until 2005. She was first elected to represent Mid Ulster in the 2007 assembly vote.

In 2010, she became the first female mayor of Dungannon and South Tyrone and was appointed as the Minister for Agriculture and Rural Development after the 2011 Assembly election.

In 2016, she was appointed as the Minister of Health and, after just eight days in office, announced she would scrap the lifetime ban on gay and bisexual men donating blood in Northern Ireland.

O’Neill was appointed as Sinn Fein’s ‘party leader in the North’ after the resignation of deputy First Minister Martin McGuinness in 2017, beating former IRA member Conor Murphy which many said marked a notable break in the direct association with the organisation.

Ms O’Neill has served as deputy First Minister under the DUP’s Arlene Foster and Paul Givan since 2020.

Pictured: Leader of the DUP Sir Jeffrey Donaldson (left) raises holds the hand of elected colleague Edwin Poots during the count for the Northern Ireland Assembly Election in Belfast